These tech companies are trading at lofty valuations but their forecasts imply they might be fairly valued.

The U.S. equity market entered a turbulent zone in September, with volatility driven by worries about inflation and the impact that sharply rising COVID-19 cases could have on the economy. Investors are also concerned that the Federal Reserve may reduce its monetary stimulus activities in the coming months, which could negatively impact growth stocks. And most recently, the market has also been shaken by the possibility of a massive debt default by China's second-largest property developer, China Evergrande Group (EGRN.F 542.86%), which could greatly impact the nation's economy.

Amidst all this chaos, lies opportunity. The share prices of many fundamentally strong growth companies have recently declined with the market turbulence -- among them were Shopify (SHOP -3.95%), Nvidia (NVDA -3.89%), and Square (SQ -2.69%). Investors could position themselves to earn handsome returns by picking up these stocks at a discount now. 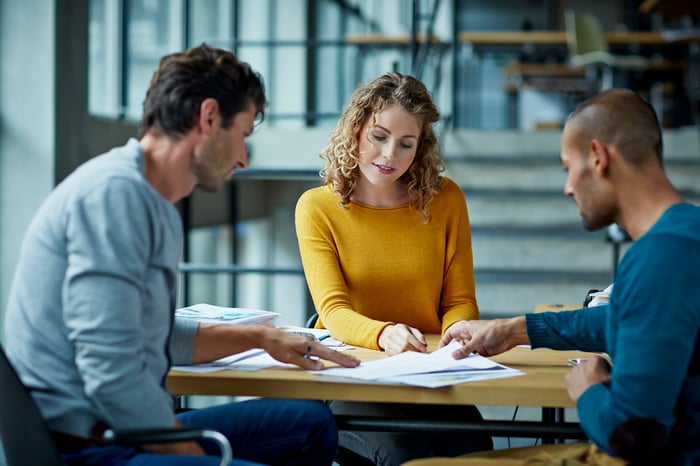 Shopify provides digital infrastructure and software tools that businesses of all sizes can use to build an e-commerce presence and manage both online and physical store operations. In 2020, 8.6% of retail e-commerce sales in the U.S. took place on its platform, giving it the second-largest share of the e-commerce market after Amazon.

The company serves a broad customer base exceeding 1.7 million businesses across the world. It has also built a community of 46,400 partners and an ecosystem of 7,000 apps that extend its core capabilities. With the Shopify ecosystem's capacity to handle a range of use cases across sectors, more merchants are opting to sign up for its services. This growing client base makes it even more attractive for partners and app developers. Network effects have resulted in a loyal customer base, as competitors have to offer many more services to lure Shopify's clients away from its platform.

As of the end of the second quarter, 63% of Shopify's brick-and-mortar customers in English-speaking geographies had opted for omnichannel features, a significant jump from around 2% as of the end of February 2020. The rise of omnichannel retail is a major growth driver for Shopify. It's also leveraging its partnerships with social media platforms such as TikTok and Facebook to attract more merchants and entrepreneurs.

Shopify's revenues soared by 86% to $2.9 billion in 2020 and rose by 57% year over year to $1 billion in Q2 2021. The company is also witnessing rapid expansion in recurring revenues, which is improving its revenue visibility. Higher operating leverage, the lowering of general operating expenses, is also translating into increased profits.

Shopify is currently trading at 47 times trailing-12-month (TTM) sales, much higher than the software industry's median price-to-sales (P/S) multiple of 3.84. However, against the backdrop of a strong customer base and rapidly improving financials, the stock can be an attractive buy even at these elevated levels.

The launch of Nvidia's GeForce RTX 30 Series cards, which are based on its new Ampere GPU microarchitecture, has triggered a massive upgrade cycle in the PC gaming world. Although those cards hit the market in September 2020, only 20% of the company's installed gaming base had upgraded to them as of Aug. 1, 2021, the end of its fiscal 2022 second quarter. Given that the lion's share of its prior gaming customers have yet to upgrade, Nvidia still has a large market to tap for additional sales.

Additionally, the launch of the subscription-based GeForce NOW cloud gaming service in February 2020 has opened more revenue opportunities for Nvidia. Newzoo estimates the global cloud gaming market will be worth $6.5 billion by 2024. 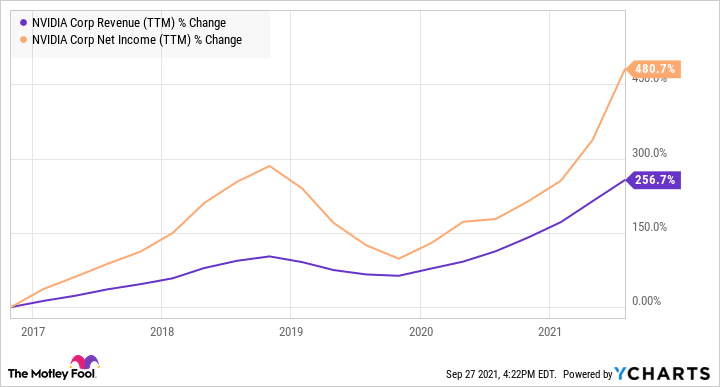 Nvidia's dominance in the booming GPU market is reflected in its financials. Since 2017, revenues have increased by 256.7%, while net income has jumped by 480.7%. In fiscal 2022's second quarter, gaming revenues rose 85% year-over-year to $3 billion, while data center revenues were up 35% to $2.4 billion. Currently, there is regulatory uncertainty about the fate of the company's proposed $40 billion acquisition of Arm Holdings from Softbank Group (SFTB.Y -2.03%). But if the deal goes through, it will mean major progress for Nvidia not only in the smartphone business but in several other cutting-edge smart applications.

Even without Arm, Nvidia's strong GPU business is being powered by the rapidly evolving digital economy. Hence, although the company is currently trading at a rich valuation of 25 times TTM sales which is much higher than the median semiconductor industry P/S multiple of 3.98, it could still prove to be a winning pick for retail investors.

Fintech player Square has come a long way in the last decade. From its origin as a manufacturer of point-of-sale devices for small businesses, it has evolved into a full-fledged financial platform for both merchants and consumers.

Square's broad customer base, which includes millions of sellers and 70 million annual active Cash App customers, has created a strong network effect. The company's seller ecosystem is increasingly focusing on large businesses (with annualized GPV over $125,000), a customer cohort that is usually more resilient in the face of macroeconomic uncertainties. In Q2, 65% of its total seller ecosystem revenues were derived from these large businesses. The company's potential acquisition of leading Australian buy-now-pay-later player Afterpay in a $29 billion all-stock deal could also prove to be a solid move. If successful, the Afterpay deal will expand Cash App's payment options and add 16 million active customers. Square also expects that integrating Afterpay into its seller ecosystem will help it attract more enterprise clients and expand into new geographies.

Square is currently trading at a TTM P/S multiple of 8.43, significantly higher than the 3.84 median multiple of the software industry. Despite that premium valuation, the company's solid value proposition makes it an unavoidable pick for retail investors.