This electric vehicle company is living up to the hype.

On Sep.16 Lucid was crowned the king of range as its Lucid Air Dream Edition sedan got an official Environmental Protection Agency (EPA)-rated range of 520 miles -- the highest of any EV ever rated by the EPA.

As great as that news was, though, Tuesday was arguably the company's most encouraging announcement of the year. On Monday Lucid kicked off its production preview week at its manufacturing facility in Casa Grande, Arizona, opening its doors to media, analysts, and other guests for the first time. It was all quiet on the western front until Lucid announced late Tuesday afternoon that it had officially started mass production of the Lucid Air, and will begin customer deliveries in late October. At the time of this writing, shares of Lucid are up around 9% on the day and over 25% in the last month.

Despite the higher price tag, there's never been a better time to buy Lucid Group stock. Here's why. 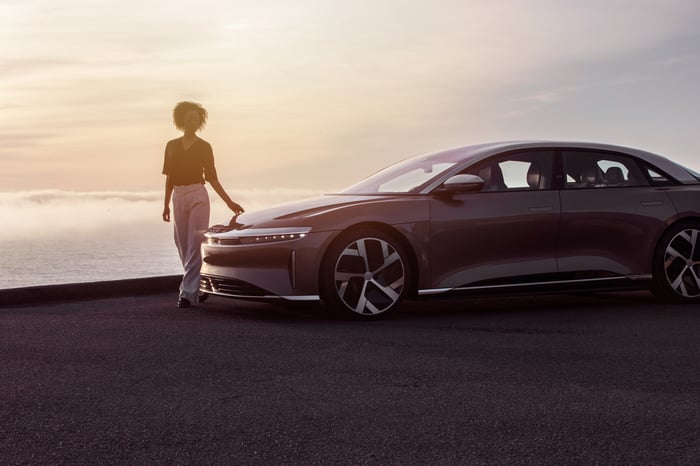 Expectations for Lucid were high even before it merged with Churchill Capital IV, a special purpose acquisition company, in mid-July. The company is directly challenging Tesla's (TSLA 2.28%) Model S, Daimler's (MBGA.F -0.54%) Mercedes-Benz S-Class line, and other luxury brands such as Porsche, Audi, and Tata Motors' Jaguar. Lucid's competitive advantage is its technology: The company has been able to achieve performance, power, and range from an efficiently sized battery pack. Its integrated power train is developed in-house, which adds costs but leaves Lucid more in control of its design and production.

The company's top-tier management team, flashy marketing, and unapologetically confident events and presentations have given investors some lofty targets. Guidance from its most recent investor presentation suggests 20,000 vehicle deliveries and $2.22 billion in 2022 revenue, growing to 251,000 deliveries and $22.8 billion in revenue by 2026. Going from 0 annual deliveries to 251,000 annual deliveries in roughly five years would be an unprecedented feat. For comparison, consider that Tesla produced 510,000 vehicles in 2020 and generated $31.5 billion in revenue. Tesla is expected to deliver a record-high 230,000 vehicles in the third quarter.

Living up to the hype

Lucid is young and unproven, so its projections should be met with some skepticism. But to its credit, the company continues to show investors that it can deliver on lofty expectations.

For starters, its merger with Churchill gave the company around $4.4 billion in cash net of expenses, which it is using to accelerate spending, expand its manufacturing facility, and develop lower-end trims of the Lucid Air and Lucid Gravity SUV.

On the production front, Lucid successfully opened its manufacturing facility, fine-tuned its car by building 89 pre-production models in June, entered mass production in late September, (which was in line with its second-half-of-2021 estimate), and will begin deliveries in the fourth quarter.

And finally, on the vehicle front, the Lucid Air exceeded the company's earlier range estimate, management has been executing its vision well.

In sum, Lucid has done just about everything it said it was going to do, and on time -- which is impressive considering supply chain issues and the global chip shortage.

Just because Lucid said it has entered mass production doesn't mean it will be smooth sailing from here. The company will need to prove it can continue to generate demand, scale production, eventually reach positive operational cash flow, and become profitable in order to justify a higher valuation. However, it's safe to say there has never been a better time to invest in Lucid stock.

Less than three months ago, Lucid still needed shareholders to approve its merger with Churchill to get the cash it needed to grow its business. It also wasn't answering the one question investors wanted to know, which was when it would begin mass production. As Lucid began its production week on Monday, there was speculation that it would announce a firm production start date. It did just that, and the stock went up accordingly. The point is that uncertainty, for better or for worse, tends to decrease as a company matures.

As investors, the earlier you choose to invest in a growth stock like Lucid, the more risk/reward you're going to get. Investing in Amazon in 2005 was way risker than it is today, but it was also more rewarding. However, buying a start-up early that ends up failing can wipe out an investment. Five years from now, Lucid could very well be worth a lot more or a lot less than it is today. An investor can certainly wait to see if Lucid can become an established automaker, but in doing so could be leaving profits on the table.

A better buy despite the higher price

Over the last month, Lucid stock has gone up in value. But it's arguably a much better buy than it used to be because of glowing reviews from Motor Trend, favorable EPA ratings, and the dawn of mass production. Investing in Lucid today still demands a high risk tolerance, but it's an easier investment to make now that Lucid is actually producing cars.

Why Uber Stock Was Climbing Today