Please ensure Javascript is enabled for purposes of website accessibility
Log In Help Join The Motley Fool
Free Article Join Over 1 Million Premium Members And Get More In-Depth Stock Guidance and Research
By Daniel Foelber – Sep 14, 2021 at 7:35AM

From taking center stage in the spring special purpose acquisition company stock surge, to merging with Churchill Capital IV in July, to seeing its share price plummet as early investors cashed out, Lucid Group (LCID -2.24%) has had its fair share of positive and negative news.

Here are three reasons why everyone is talking about Lucid stock, and whether or not the stock is a buy right now. 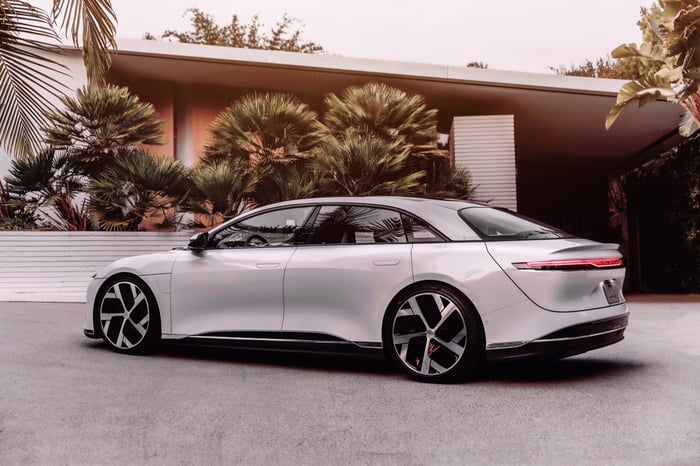 With a gain of 743%, Tesla (TSLA -0.19%) was hands down the best-performing stock in the S&P 500 in 2020. In just a few years, investor sentiment shifted from doubt and criticism to optimism toward electric vehicles and energy storage.

Tesla stock's rise embodies a modern newfound willingness for risk-tolerant investors on Wall Street and Main Street to pay massive premiums for stocks. The reasoning is that sustained growth and paradigm-shifting technology could make a company generate much higher revenue in the future compared to what it's making today. Whether it's Square and PayPal Holdings as leaders in the war on cash, CrowdStrike Holdings' rapid growth in the cybersecurity industry, or Enphase Energy's expensive valuation as a hyper-growth solar stock, multiple industries have experienced the tailwinds of investor enthusiasm.

Lucid has referenced Tesla's valuation and directly compared the specs of its Lucid Air sedan to Tesla's Model S. It's pretty clear Lucid has bold aspirations to become a leader in the EV market. In all likelihood, it won't just be new companies like Lucid or Nio that compete with Tesla for a share of the luxury sedan and SUV market. Realizing the potential, several major legacy automakers are coming up with their own EV offerings to compete in the EV gold rush.

Lucid has a market cap of over $30 billion, making it one of the most valuable up-and-coming pure-play EV companies. The main driver behind why Lucid has garnered so much attention is likely due to its technology. Lucid has built a very impressive car in the Lucid Air. The specs of its most expensive trim, the Lucid Air Dream Edition, can hold their own with even the stiffest competition.

A recent test by CEO Peter Rawlinson and Motor Trend editor Jonny Lieberman validated the impressive range of the Dream Edition. Rawlinson drove the Lucid Air Dream Edition Range 445 miles from San Francisco to Lucid's HQ in a single charge, and still had 72 miles left of range -- bringing the car's total capacity to 517 miles. Even Lieberman (who hadn't previously driven the car and therefore wasn't as experienced at conserving power) had 30 miles left of range, making his car's capacity 475 miles. Upon launch, the car will be the first EV to offer over 500 miles of Environmental Protection Agency-rated range. Given the prospects of that kind of achievement, it's unsurprising Lucid has been attracting attention from car nuts and interested investors.

It sounds simple, but uncertainty is a key reason for the buzz surrounding Lucid Group. Despite its achievements and favorable press from publications like Motor Trend, the Lucid Air remains in preproduction. Mass production and distribution has been targeted for sometime in 2021, but the clock is ticking.

Even if Lucid begins deliveries in the coming months, it still needs to prove the car is worth the price. The specs could hold up, but if the car has finicky components, buggy software, or any other number of simple flaws, then Lucid's service will be put to the test. Stores and service centers are growing, but remain concentrated in major cities.

In sum, Lucid has checked merely one box off the laundry list of requirements needed to be a successful car company. It's got a killer car, which is the hard part. But does it have the skills and staff needed to successfully roll out and scale the Lucid Air? For now, all we can do is wait. However, Lucid said it will host a production preview week starting Sept. 27 at its Advanced Manufacturing Plant (AMP-1) in Casa Grande, Arizona. The event, for better or for worse, could give investors insight into updated production timelines and its manufacturing process.

If Lucid becomes a leader in the luxury EV market, then the company could very well be worth quite a bit more in the future than it is today. But that's a big if. For now, Lucid remains a speculative high-risk, high-reward EV play.

Lucid was able to secure $4.4 billion in cash from its merger with Churchill Capital IV. It believes this cash will be able to fund at least its 2022 operations. The biggest risk to Lucid is time. The company's ability to efficiently use cash and begin generating revenue will help quell uncertainty. As Lucid progresses on its journey as a company, there will likely be less uncertainty. As with other growth stocks, it's up to the investor where they would like to invest on the growth arc. Investing in Netflix in 2017 instead of 2007 was a less risky bet, but it also made a lot less money. On the flip side, investing in a young company that ends up failing could result in a catastrophic loss that could have been avoided if an investor waited for the business to mature.

For many investors, the best course of action could be to simply wait and give time for Lucid's growth story to play out. But for those who believe in the company and plan on holding it for years, it wouldn't be the worst idea to form a starting position now.

Lucid Is Falling as Rivian Picks Up Steam
356%