E-cigarette usage is sure to gain traction, particularly in light of the FDA's announcements in October. It just doesn't matter to the tobacco industry as we know it.

The U.S. Food and Drug Administration (FDA)'s recently authorized three new e-cigarette products from R.J. Reynolds -- the agency's first-ever authorization of its kind. At first glance, it seems like great news for tobacco companies that know cigarette smoking is a doomed business as it can pave the way for the authorization of comparable products from Altria (MO -1.42%) and Philip Morris International (PM 0.87%).

A deeper dive into consumer perceptions and growth outlooks around vaping, however, suggests the recent green light from the nation's top food and drug regulatory body isn't the pivotal moment for the industry it was supposed to be. Tobacco companies are still on the defensive. 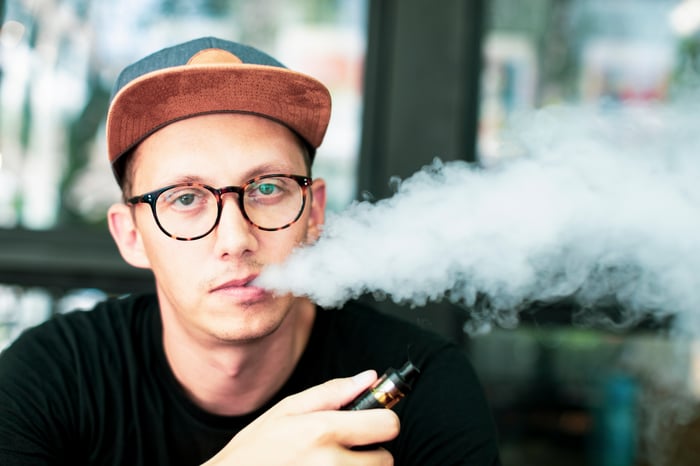 The official statement from the FDA's Center for Tobacco Products director Mitch Zeller, J.D., explains that R.J. Reynolds' "tobacco-flavored products could benefit addicted adult smokers who switch to these products -- either completely or with a significant reduction in cigarette consumption -- by reducing their exposure to harmful chemicals."

It's worth noting R.J. Reynolds, which falls under the umbrella of parent company British American Tobacco (BTI -0.87%) -- saw the FDA reject more of its e-cigarette products than the agency authorized. All told, 10 flavored e-cigarette products were denied an authorization, aligning with the pronounced health problems linked to flavored vaping goods in 2018 and 2019. The three green-lighted products are the Vuse Solo vaporizer and two replacement cartridges for use with the device.

Still, the FDA's nod of approval bodes well for Altria's 35% stake in e-cigarette brand Juul. Ditto for Philip Morris International's IQOS device, which is licensed to Altria to market within the United States -- even though that device was recently banned for sale in the United States by the International Trade Commission due to patent violations. Vaping as an overall vice still landed a huge regulatory victory.

Except it may not really matter.

2 noteworthy numbers about the e-cigarette business

The U.S. Food and Drug Administration may be warming up to e-cigarettes, but consumers themselves are cooling on them.

A peer-reviewed study overseen by Wagner College last year sheds some light on the matter. Namely, the survey indicates 80% of the 413 U.S. adults queried agreed that "vaping increases difficulty breathing and coughing." Similarly, 82% of respondents conceded that "if a healthcare provider advised me to stop vaping, I would quit."

This poll's findings jibe with a similar study performed by the University of Missouri-Columbia School of Medicine around the same time, which indicates more than 81% of the people polled believe e-cigarettes are unsafe. Those numbers are up, and still growing, from previous year's consumer concerns regarding the use of vaporizers.

It's not an auspicious sign for the fledgling vaping movement.

That's not to suggest the use of e-cigarettes won't grow -- consumers can and often do develop habits they know are less than healthy. But even to the extent electronic cigarettes can push through poor perceptions of the practice, e-cig revenue isn't apt to even come close to replacing conventional cigarette revenue.

Take any outlook for the vaping industry with a grain of salt. It's a new and fluid space, and though they've been on the market for some time, it's only been within the past year that the FDA has made a clear call on e-cigarettes. Philip Morris/British American Tobacco's IQOS tobacco-heating system was only permitted to be marketed as a safer alternative to conventional smoking in July of last year, and this latest authorization of the basic Vuse product is the first time the agency has ever authorized what it's describing as an electronic nicotine delivery system. We're still mostly in uncharted waters.

Nevertheless, many of the vaping market's growth forecasts were formed with some degree of regulatory approval in mind, and they're still not thrilling. Technavio believes the global e-cigarette market will expand by 17% per year between 2019 and 2024, growing by a total of more than $29 billion over that period. That translates into a market of around $55 billion by 2024.

Verified Market Research estimates the worldwide vaping market will grow from $10 billion in 2020 to nearly $74 billion by 2028. Mordor Intelligence says the global e-cigarette industry generated nearly $19 billion of revenue last year with about 17% annual growth expected through 2026. That would make it a $49 billion business by the end of the six-year span.

These growth outlooks are impressive to be sure, but for perspective, the worldwide combustible tobacco ("smoking") market was worth more than $700 billion in 2019, according to numbers from British American. That figure ratchets up to more than $800 billion when including smokeless tobacco usage.

While e-cigarettes are particularly popular in the U.S., the global data proportionally applies to the nation's smoking and vaping industries.

Think results and sustainability, not premise

None of this is to suggest tobacco companies should simply ignore the potential growth of vaping or e-cigarettes. There's clearly something there, and even though many consumers appear disinterested due to health concerns, the FDA's nod to the Vuse adds a layer of credibility to the industry's intended transition from smoking to vaping.

If the outlooks are anywhere on target, though, e-cigs will at best be worth just a tenth of the smoking market's current size ... a market that's clearly on the defensive and poised for a continued decline. No long-term shareholders of Philip Morris International and Altria can afford to ignore this alarming reality.

Then, there's this qualifier from the FDA's authorization announcement of the Vuse Solo:

The FDA may suspend or withdraw a marketing order issued under the PMTA pathway [the one used for the Vuse Solo] for a variety of reasons if the agency determines the continued marketing of a product is no longer "appropriate for the protection of the public health."

That's not exactly the basis for an ironclad bull thesis.

What the Smartest Investors Know About Altria Stock