Investing gets simple if you have to put all of your eggs in one basket.

It's not that difficult to spread your investments out across many companies and hope for the best over a long time horizon. After all, diversification limits the damage any one company can do to your portfolio.

Force an investor to choose just one company and it's natural to look for stability, consistency, and a strong competitive position. We asked three contributors to Fool.com to make that choice and two offered Novo Nordisk (NVO -0.97%) and Johnson & Johnson (JNJ -0.37%). Another took a different route by making a bet on ARK Genomic Revolution ETF (ARKG 0.15%) in the hope of owning the first healthcare industry trillion-dollar market cap company. Here's why each made their pick. 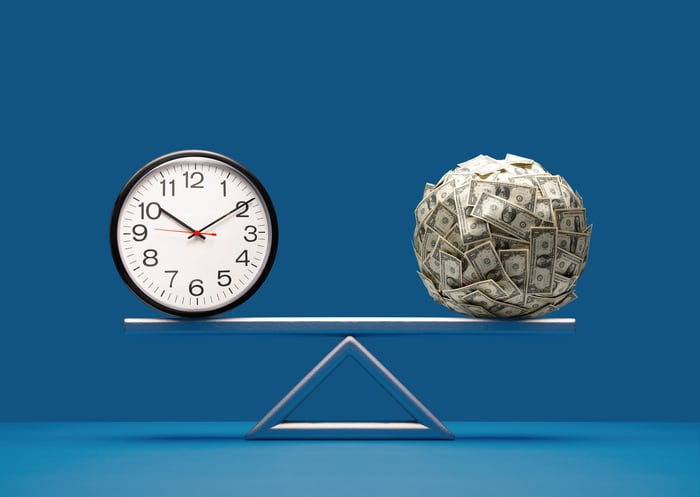 Innovation is keeping this drugmaker on top

Jason Hawthorne (Novo Nordisk): Novo Nordisk is one of three large drug manufacturers that account for the majority of insulin production in the world. The others are Eli Lilly and Sanofi. The company has been in the business of treating diabetes for 85 years and it has been good for shareholders. The stock has returned nearly 14,000% over the past three decades.

Diabetes is gaining in prevalence around the globe and especially in the U.S. Just over 1 in 10 Americans have diabetes and 1 in 3 have pre-diabetes. That's why the American Diabetes Association has recommended all patients be screened for diabetes at three-year intervals beginning at age 45. At least one medical panel recommends screening begin at age 35. As the healthcare system gets more proactive about preventing diabetes, it makes sense for Novo Nordisk to move upstream from just treating symptoms.

That's one reason the company has innovated beyond the insulin market. One way it has done that is by developing glucagon-like peptide (GLP-1) treatments that slow digestion and limit the amount of sugar and insulin produced by the body. Its first, Ozempic, was an injectable approved by the Food and Drug Administration in 2017. The follow-up, Rybelsus, was approved in 2019 as the first oral GLP-1 to get the green light in this country.

In June, another GLP-1 was approved to treat obesity. Wegovy may be new, but it's off to a fast start. Management cited demand for the drug as part of the reason guidance was raised for the full year. Although the direct causes of diabetes remain unclear, a study in the U.K. found obese people were up to 80 times more likely to develop the the disease.

The company now boasts 51.3% share of total GLP-1 prescriptions. And it's a fast-growing category -- about 25% annually according to management. In the first half of 2021, more than 4 out of 5 new prescriptions for Novo Nordisk were in the GLP-1 class.

That propelled year-over-year sales growth for the company to 12% for the period. The Danish company reports in krone versus U.S. dollars. For context, the current exchange rate is 6.39 Danish krone (DKK) per U.S. dollar. That makes total sales in the first half of 2021 roughly $10.5 billion.

With a long history of treating patients with diabetes, tackling contributing factors and developing easier to administer medicine is a natural path of innovation for Novo Nordisk. It should keep the company in the driver's seat for at least the next decade.

Beyond its dominant position in diabetes and obesity treatment, it has a generous capital return program combining a respectable 1.4% dividend yield with a 21% reduction in shares outstanding over the past decade. It all adds up to a strong, dependable company that shareholders should be able to count on through good times and bad on Wall Street.

A top pharmaceutical stock with a superb dividend

Rachel Warren (Johnson & Johnson): As a healthcare writer who frequently covers all manner of stocks in this universe, it was pretty difficult for me to narrow the choices down to just one. But if I could only own one healthcare stock right now, I'd have to go with a company that I'm currently a shareholder of and write about frequently here on Fool.com.

Johnson & Johnson isn't a new name to readers, but it's a stock that I firmly believe has a lot to offer investors in the way of long-term stability and consistent shareholder value through its dividend. The company has been paying a dividend for longer than many of today's top healthcare stocks have even been in business, and it's raised its dividend for so many years that it's a bonafide Dividend King. The stock currently yields 2.6% based on current share prices.

Johnson & Johnson's business was impacted in the earlier days of the pandemic. However, it closed 2020 out with about 1% operational sales growth and has consistently delivered exceptional earnings in each of the three quarters it's reported for 2021 so far. Johnson & Johnson has revealed its staying power and resilience by not only rebounding from pandemic headwinds, but also by continuing to pay out its dividend when a number of household name companies like Walt Disney suspended their payouts indefinitely.

Johnson & Johnson reported its financial results for the third quarter of 2021 on Oct. 19. During the three-month period, the company's sales grew by nearly 11% on a year-over-year basis, while its net earnings jumped about 3% year over year. And adjusted earnings per share grew by a whopping 18% from the year-ago quarter. The company also reported strong year-over-year sales growth in each of its three business segments: 14% in pharmaceutical, 6% in consumer health, and 8% in medical devices.

Admittedly, Johnson & Johnson isn't a stock that's likely to deliver multi-bagger share price returns over the next five to 10 years. However, if you're looking for a high-quality business that not only boasts an extensive lineup of products which consistently generate robust consumer sales, but also maintains an impressive pipeline and a juicy dividend to boot, Johnson & Johnson is a no-brainer stock to buy.

Betting on innovation instead of one company

Steve Ditto (ARK Genomic Revolution ETF): Few sectors of the economy have more growth potential than genomics. Technology improvements and cost reductions in genetic testing and treatments are making it possible to diagnose, treat, and even cure deadly diseases. For investors, the challenge is how to pick the eventual winners from a large field of innovative companies started by brilliant, often Nobel prize-winning, scientists.

Some smart investors may ask, "Why pick?" Instead of trying to find one stock, a better approach may be to buy a basket of stocks where a couple of big winners could offset many less successful picks. This approach is more than a diversification strategy. The genomics market will be huge and there will be many big winners. It's possible we could see the first healthcare company with a trillion-dollar market cap emerge from this sector based on having a technology capable of curing deadly diseases. The trick is to make sure you're invested in the big winner.

If you're on board with the basket approach it could be a smart move to let CEO Cathie Wood and her ARK Investment Management firm do the picking. The ARK Genomic Revolution ETF aims to invest in companies ARK management believes can grow by 15% per year or more annually -- effectively doubling investors' money every five years.

The ARK Genomic Revolution ETF has identified 56 companies it believes are proving to be "leaders, enablers, and beneficiaries" of gene editing, targeted therapeutics, bioinformatics, molecular diagnostics, stem cells, agricultural biology, and healthcare innovation. Some of the top holdings in the ETF include genetic sequencing companies like Pacific Biosciences of California, genetic testing companies such as Invitae and Exact Sciences, CRISPR gene-editing companies such as Beam Therapeutics and Intellia Therapeutics, and genomic oriented biotech companies including Vertex Pharmaceuticals.

The ARK Genomic Revolution ETF has been beaten down in the post-pandemic sector rotation, and is almost 19% down year to date. ARK Management remains very bullish on the space and believes the recent price reduction will make it easier to hit its 15% target from here.

Given the high potential of the genomic market, long-term buy-and-hold investors should consider the current share price as an attractive entry point providing them with an opportunity to profit from the genomic revolution.