The biopharma's takeover bid has failed to materialize after nearly two weeks. Here's what might be going on.

On Oct. 22, Bloomberg News reported that Bristol Myers Squibb (BMY -0.74%) was considering a takeover bid for the autoimmune drugmaker Aurinia Pharmaceuticals (AUPH 1.74%). Since then, additional rumors have surfaced that other pharma giants such as GlaxoSmithKline (GSK -0.11%), Roche, and Otsuka Pharmaceuticals may also be in negotiations to acquire the midcap biopharma.

As a direct result, Aurinia's shares have vaulted higher by an impressive 45% in less than two weeks' time. Despite these various claims, however, a formal merger agreement has yet to materialize. GlaxoSmithKline, in fact, went as far as to publicly deny interest in acquiring Aurinia just two days ago. Here is a look at what could be holding up a deal and why Bristol is probably the most likely suitor in this case. 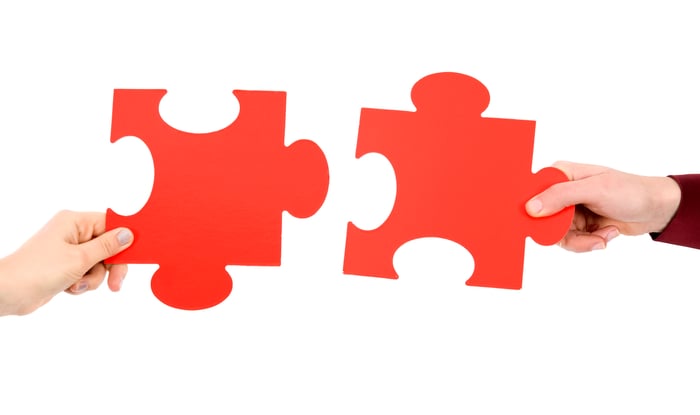 Why is Aurinia an attractive takeover target?

Once a major news organization like Bloomberg reveals that a deal is being considered in the biopharma realm, history has shown that a merger agreement is typically imminent (within two or three days at most). Negotiation talks are generally leaked on purpose by one of the parties involved, usually to create leverage. In this case, this Wednesday will mark a full 12 days since this news originally broke. Investors, in turn, are rightfully wondering what might be going on.

Before tackling this burning question, though, here is some important background info on why Aurinia might be a potential takeover target in the first place. On Jan. 22, 2021, the Food and Drug Administration (FDA) approved the biopharma's oral lupus nephritis (LN) medication called Lupkynis. LN is characterized primarily by inflammation of the kidneys in patients with the autoimmune disorder systemic lupus erythematosus. What's important to understand is that the drug can top $1 billion in annual sales with a minuscule 16% share of the market.

Almost exactly one month prior, the agency approved GlaxoSmithKline's injected LN therapy, Benlysta, for this same indication. Analysts initially suggested that these back-to-back approvals for LN might set up a fierce competition between the two drugs. But recent survey data have shown that specialists in the field are using these newly approved LN drugs to treat different types of patients. Keeping with this theme, Benlysta is reportedly being favored among doctors as the preferred option for mild and moderate cases, whereas Lupkynis seems to be gaining traction as the go-to treatment for moderate to severe cases of LN.

In brief, the drug's varying commercial forecasts are the likely culprit. Bristol might be using the $1 billion near-term peak figure as the basis for any offer. If true, the pharma giant is probably offering something along the lines of $5 billion for Aurinia (five times peak sales), or roughly $39 a share.

Aurinia's management, on the other hand, could very well be using the $2 billion forecast as their starting point in takeover talks. In effect, Aurinia's brain trust may be unwilling to accept anything lower than three times this higher peak sales figure, or approximately $47 per share.

What's more, the biopharma might be holding out for a truly spectacular offer of around $78 a share (five times the higher peak sales estimate, in this case). No one outside of the alleged talks knows the basis of any negotiations for sure. But this rumored deal does appear to be stalled. The final price -- assuming these rumors are true -- is surely the reason why.

Bristol has to pull the trigger on a deal

The long and short of it is that Bristol is staring down key patent expirations this decade and its megablockbuster cancer drug Opdivo is no longer posting blistering levels of quarterly sales growth. As a result, Mr. Market has seen fit to drive the drugmaker's shares down by nearly 5.5% so far this year. Moreover, Bristol will probably need two or more bolt-on acquisitions simply to change the negative sentiment weighing on its stock right now. Acquiring Aurinia would be a great start for the big pharma on this front given the strong commercial outlook for Lupkynis.