Jamie Louko and Patrick Bafuma
(TMFAtticus)
Author Bio
He is an investor that has developed his methods from the likes of Motley Fool greats like David and Tom Gardner. He primarily focuses on high-growth, moderate-risk companies that could experience multi-bagger growth over the next 10 years. Jamie looks for innovative companies that are disrupting their respective industries and have the potential to create a new industry standard.
Follow @TMFAtticus

If you are looking to invest in companies that aim to provide disruptive technology to the healthcare sector, there can be plenty of intriguing options. While some of those may lack a solid foundation to build a high-quality business on, 10x Genomics (NASDAQ:TXG) and DermTech (NASDAQ:DMTK) don't suffer from that issue, and each is well worth your consideration.

Both have immense potential, but which stock is a better buy today? Two Motley Fool contributors battle it out to answer this question. 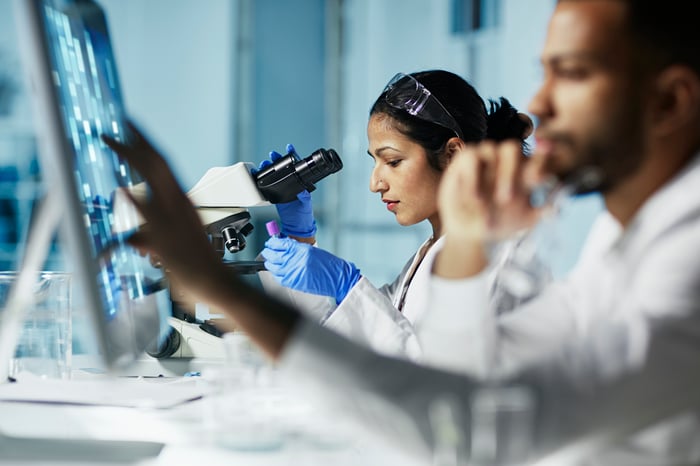 Jamie Louko (DermTech): While 10x Genomics might have "10x" in its name, DermTech stock could have 10x growth potential if it can succeed over the next decade. Dermtech's new way to test for skin cancer could replace the traditional biopsy because of its ease of use, low cost, and high effectiveness.

The company's pigmented lesion assay (PLA) test reduces the chance of missing melanoma from 17% to 1% and increases accuracy from between 65% and 84% to between 91% and 95% compared to a traditional biopsy. Testing using the PLA is easy: The sticker-like adhesive patch is placed on the suspected area, then removed after 10 seconds. The patch is then sent to a lab for testing, and within 72 hours, results are ready. It also costs less for uninsured Americans -- $760 compared to $947 for an average traditional biopsy.

The company's sales are growing at remarkable rates. In the second quarter, its testing volume rose 267% year over year to 11,750 tests, boosting its revenue by 269% to $3.1 million. While that quarter did have an easy comparison to Q2 2020 (when the number of people visiting doctors for non-urgent reasons plunged), it's worth noting that its sales volume and revenue also increased by 25% and 33%, respectively, compared to the first quarter of 2021.

DermTech has a $900 million market capitalization, however, and it's still in a very early stage of its journey. It only became gross margin positive in Q1, and its Q2 margin rose to 11% from negative 118% in the prior-year period. Its net losses are also worrisome: DermTech lost $17 million in Q2 -- more than five times its revenue.

On top of this, the company faces extreme commercialization risk -- it has to convince doctors to use its PLA test. For numerous reasons, simply offering a superior product does not always mean the market will widely adopt it. In this case, a big hurdle will involve insurance coverage. Currently, DermTech's PLA test is only covered by Medicare, and although it is being reviewed by some large U.S. insurance payors, management does not expect to get approval from them for at least another year.

While there are substantial risks for DermTech, the future is amazingly bright if it can overcome the odds. It is researching tests for different types of skin cancer such as basal cell carcinoma, and it will soon introduce a test for UV damage. With these growth avenues, along with its current operations, the company believes it has an addressable market of $10 billion. If it can overcome its great challenges, the company has the potential to be a 10-bagger for investors.

Patrick Bafuma (10x Genomics): Life sciences research toolmaker 10x Genomics is powering the century of biology. Using the company's instruments and associated consumables, researchers can see what goes on inside a cell more easily than ever before. Think of its equipment as doing the equivalent of gently peeling back the skin of a pomegranate to see how the seeds are intertwined -- compared to previous standard procedures that involved smashing the fruit to see what was inside.

The young research company already has a track record of success. Revenue in the third quarter grew 74% year over year to  $125.3 million, and was up by 101% from the same period in 2019, which was its first quarter as a publicly traded company. It has plenty of room to grow, too. The company believes the market for applications in which it can offer immediate alternatives and complementary solutions approaches $15 billion annually with another $10 billion in downstream analytical tools.

The best part for investors is that researchers love 10x Genomics. All of the world's top 100 research institutions and the top 20 global pharmaceutical companies are already utilizing its instruments. About half of its sales occur outside of the U.S., and no direct customer accounts for more than 5% of revenue. There are now more than 3,000 published journal articles based on research that used its tools -- up from 2,500 in May. That statistic alone makes it clear that 10x Genomics' products are a must-have for innovative researchers in the biological sciences. And with little competition, a large addressable market, and an established presence, I expect its heady growth to continue.

How can you choose?

When it comes down to it, determining which company fits best in your portfolio requires you to know yourself as an investor. DermTech could be a wonderful all-or-nothing stock for the next decade, but it might only be suitable for people who are willing to hold it through wide swings over a period of 10 to 20 years in diversified portfolios. If you're not comfortable with that, but still want the potential for market-beating returns and multibagger potential, 10x Genomics might be a better fit for you. Either way, both companies could potentially be worthy of your money today if you're ready to buy and hold them for the long haul.