The energy industry is going through a massive upheaval as coal slowly dies, fossil fuel consumption peaks, and renewable energy and electric vehicles begin the take over the market. As this happens, investors face both uncertainty and opportunity long-term.

As we look at which energy stocks will perform well for decades, three of our contributors think Bloom Energy (NYSE:BE), Brookfield Renewable (NYSE:BEPC), and NextEra Energy (NYSE:NEE) are not only built to survive, but to thrive. 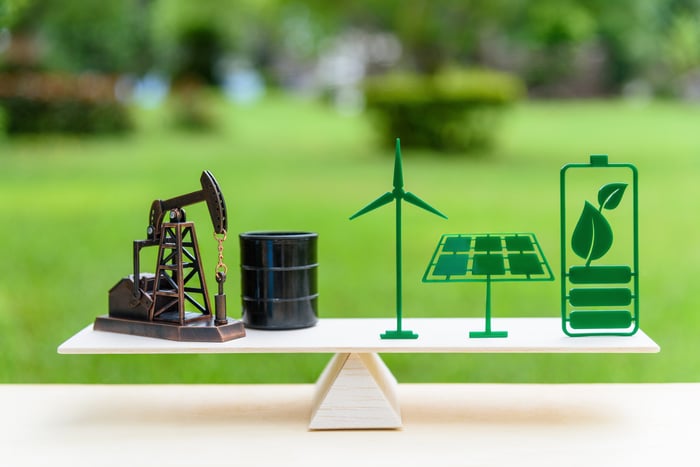 Travis Hoium (Bloom Energy): Hydrogen could be one of the most disruptive advances in energy in a century, allowing energy from clean sources like wind and solar to be stored in massive quantities and used later. Hydrogen could be used for powering ships, electrifying hospitals, or even driving commercial vehicles. And it's companies like Bloom Energy that will make this possible.

As hydrogen gets more attention from the market, stocks like Plug Power and Ballard Power Systems have gotten more attention, but you can see below that Bloom Energy generates more revenue and has better margin than both competitors. 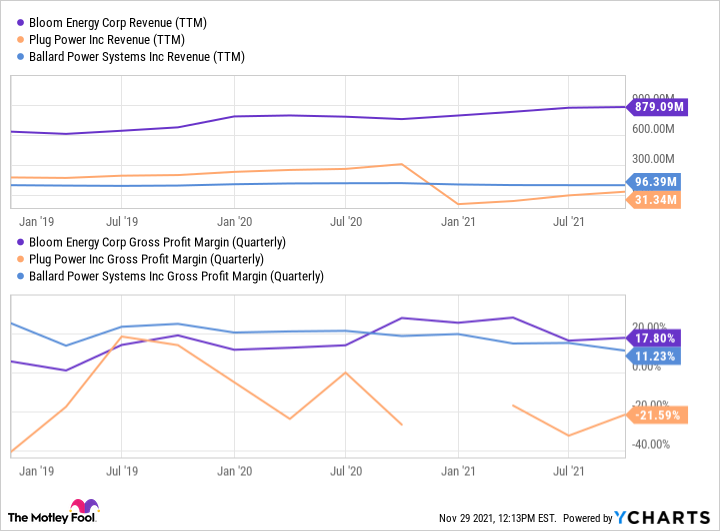 There's a long way to go in building out the hydrogen economy, but Bloom Energy is working on powering ships with hydrogen, adding backup power for the grid, and even building microgrids that could disrupt the energy infrastructure we know today. That could lead to decades of growth, which is why this is a buy-and-hold long-term stock for me. 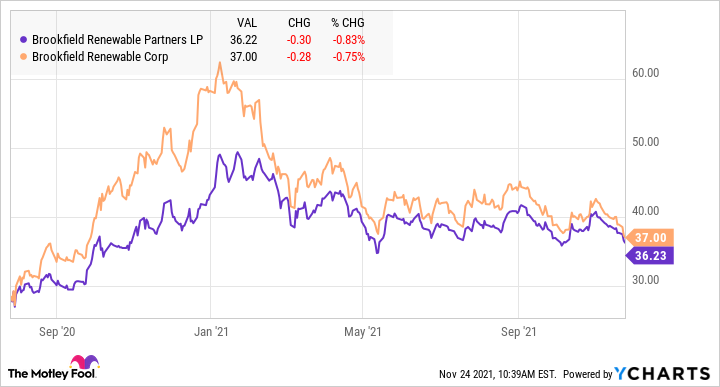 Now investors have the ability to own a more traditional stock, rather than partnership units, without paying an unnecessary premium that was attached during the first year or so of its existence. At the same time, the underlying business is operating at record levels with the global focus on transitioning to renewable energy still in its early stages. Brookfield points out that between January 2020 and July 2021, the number of countries committed to net-zero emission goals has increased more than sixfold.

The drift down in BEPC shares also has driven the dividend to a very respectable recent yield of 3.25% at a time when the company itself just reported record funds from operations (FFO). That similar measure to operating cash flow increased 32% in the third quarter above the prior-year period. The growth should continue as the company invested, or entered into agreements, for $2.4 billion of transactions just this year. Those investments involved a net $600 million from Brookfield Renewable. And the company maintains more than $3.3 billion of available liquidity to continue investing in growth initiatives.

Brookfield Renewable estimates the push for decarbonization is creating the need for over $150 trillion in total investments over the next 30 years. That opportunity, along with the recent drop in the share price, makes now a good moment to get into the renewable sector with this established player that also pays a nice dividend income.

Daniel Foelber (NextEra Energy): One of the most amusing and often effective exercises is envisioning what the world will look like 10 years from now. Flash back to 2011, and e-commerce was still in its infancy. Streaming services lacked content and speed. Smartphones weren't widespread. Cash was the preferred peer-to-peer payment system, not Square or PayPal Holdings. Fossil fuels dominated the world as renewable energy was too expensive to produce. And electric vehicles (EVs) were a concept many believed couldn't succeed.

A lot of things could happen over the next 10 years. Remote work and the gig economy could grow. E-commerce could continue to rise. Virtual reality, augmented reality, and autonomous driving could finally take hold. Applications built on crypto blockchains could have real-life applications. But when we boil it down to what's one of the easiest trends to bank on, then I would argue it's the growing role that solar and wind energy will play in the global energy mix. If that's a trend you can get behind, then NextEra Energy is an easy layup to buy and hold for 10 years or more.

NextEra is the largest producer of solar and wind energy in North America. Its profitability and free cash flow numbers look terrible because it's investing in growing its renewable capacity at such a breakneck pace. However, its adjusted numbers signal strong operating cash flow and steady adjusted earnings growth -- which proves its core electric utility business can fund its renewable growth. For example, NextEra forecasts it will earn between $2.40 and $2.54 in adjusted earnings per share in 2021, which would give it a price to earnings (P/E) ratio of 35.

Even with ramped up spending, NextEra has stayed committed to paying and growing its quarterly dividend, which currently yields 1.8%. The company's industry-leading position, growth, and dividend make it a well-rounded energy stock.

Riding a wave of growth in energy

You'll notice that each of these stocks has the industry's tailwinds behind it, riding growth in renewable energy and clean technology broadly. This is where the growth is in energy today and it's why we're betting on renewable energy stocks long-term.