If absence makes the heart grow fonder, then those intrepid gold and silver investors who stood valiantly through the sector's latest corrective slump will harbor a very special fondness for the sudden upside explosion that's occurring in precious-metal equities. From the world's largest producers, to the multitude of impaired microcap explorers, such resounding strength has been absent from these stocks for quite a long while now.

Have a look at the following one-month chart, which shows the gold and silver miners breaking out in dramatic fashion as the SPDR Gold Trust and the iShares Silver Trust have advanced by 6% and 14%, respectively. Not surprisingly, the late-summer rally gathered additional steam this week after Federal Open Market Committee minutes exhibited greater support for a third round of quantitative easing than had been seen from prior sessions. 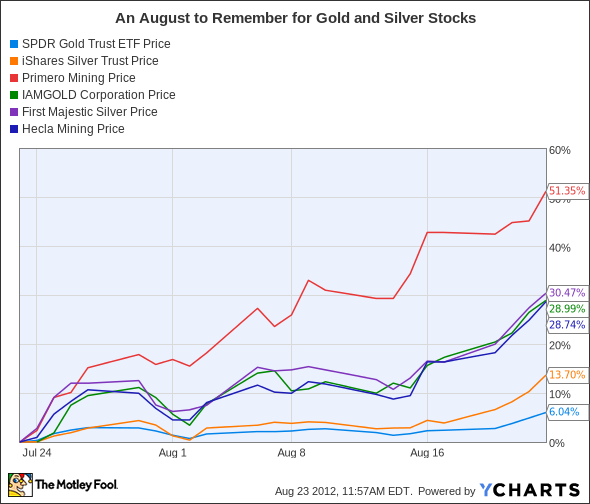 Since I pointed out just last week that IAMGOLD shares had reached a ludicrous valuation of just $103 for each resource ounce, the stock has already advanced 16%. First Majestic Silver has surged 12% since I affirmed that this growing silver producer still has the magic touch. But for all the  remarkable strength of this sudden precious breakout, what if I were to suggest to you this is merely the opening salvo of a major move that will take gold and silver to brand new highs and likely well, well beyond?

This is still just the beginning
Now that gold and silver have been on the ascent for more than a decade, and outperforming nearly everything in sight, it may be difficult for some to imagine that we could yet remain closer to the beginning than the end of this secular bull-market run (in nominal terms). But that's exactly what renowned gold expert Jim Sinclair proposes when he pledges in no uncertain terms that "gold will go to and above $3,500." Coming from the very same man who precisely called the prior peak in gold back in 1980, and correctly predicted that gold would reach $1,650 when an ounce cost less than $300 in 2001, Sinclair's revised target of $3,500 is not something I would advise skeptics to casually dismiss.

Referring to the intentional manipulation of gold and silver that even futures regulator Bart Chilton has vocally corroborated as a serious source of concern, Sinclair confidently declares: "The battle to stop gold has been lost." Now that the upward secular trend has been reignited by resilient physical demand, resurgent capital inflows, key technical breakouts, and the obvious outlook for further fiat-currency debasement, gold and silver are poised for a meaningful run to the upside that will translate into long-awaited gains from the relevant mining and exploration equities.

The visible exodus of investment capital from all things silver and gold over the trailing 15 months -- which dragged equity valuations to a shocking 15-year low when measured in relation to the gold price -- now turns to the advantage of the longs as the weaker hands have been thoroughly flushed from the market. Structurally, gold and silver remain in pristine condition to continue their secular run, since they remain severely underrepresented within prevailing asset allocations. Consider the following statement by Robert Fitzwilson, founder of The Portola Group:

Gold and silver remain ridiculously undervalued. There is no bubble. Anyone who advocates investing in these resources is immediately attacked as being on the fringe. The valuations of the premier companies reflect that. There is virtually no institutional exposure when one looks at the aggregate financial assets.

When gold and silver exposure truly goes mainstream
When it amassed an unconventional 5% allocation to physical gold bullion last year, the University of Texas endowment roughly quintupled what economist James Rickards considered a typical gold allocation among major institutions of between 0% and 1.5%. During the 15-month correction that followed before this August awakening, furthermore, I suspect the average institutional allocation will have dipped toward the low end of that range.

I find it fascinating to consider that gold can have achieved such noteworthy trailing gains even before a typical institutional allocation moves beyond the 1% range! Meanwhile, in a world where U.S. Treasury bonds offer negative yields, and the world's paper currencies are locked in a dangerous game of competitive devaluation, does this prevailing average gold allocation properly reflect gold's resurgent role as a time-tested anchor to the global financial system? I think not. So take your pick as to what you think that average allocation will be as gold approaches its ultimate peak. The important point is that from the present status quo of virtually nonexistent allocation to gold, even a modest advance to 2% or 3% of invested capital would translate into tremendous gains for the precious metals.

A few exceptions can be found to the broader pattern of institutional indifference toward silver and gold, and I believe those fund managers making early inroads into precious metals offer a collective glimpse of the sort of market penetration we can expect to witness far more commonly than we do today before any notion of a bubble can be seriously posited.

After increasing the gold allocation in PIMCO's Commodity Real Return Strategy Fund from 10.5% to 11.5% in recent months, portfolio co-manager Nic Johnson hailed gold as "the currency without a printing press." Adding more than 4.5 million shares of the SPDR Gold Trust during the second quarter, John Paulson's gold position now accounts for fully 44% of the firm's U.S.-listed equity holdings. Calling gold miners "historically inexpensive," Paulson also picked up 4 million shares of NovaGold Resources during the second quarter. And proving yet again that the investment world sorely misinterpreted his 2010 characterization of gold as a bubble, billionaire investor (and newlywed-to-be) George Soros more than doubled his gold position during the second quarter to reach 884,400 shares of GLD (with a current market value of $143 million).

With gold trading above $1,660 per ounce even before institutional and retail investors have forged any kind of meaningful foray into the sector with reasonable allocations to either physical bullion or mining equities (ideally both), this Fool has zero trouble imagining a gold price beyond Jim Sinclair's target of $3,500 per ounce as allocations adjust to reflect the resurgent role of gold and silver as critical assets for wealth preservation during periods of economic and currency distress. While I keep my own gaze set upon my interim price target of $2,250 per ounce, I will by no means be inclined to reduce my own allocation to precious metals until far higher prices prevail.

To help pare down the list of potential vehicles for increasing one's investment allocation to gold, download The Motley Fool's special free report " The Tiny Gold Stock Digging Up Massive Profits ." Our analysts have uncovered a little-known gold miner that we believe is poised for greatness; find out which company it is and why we strongly believe in its future -- for free!