According to Chiefist.com, these are the worst large-cap CEOs around.

The task is made even harder when CEOs are compared across other companies and industries. Who's to say, for example, whether Steve Jobs was a better leader and visionary than Jeff Bezos? Both founded and led companies that provide great products and services to their customers, as well as market-smashing returns for shareholders.

What follows is Chiefist's current list of the 10 worst large-cap CEOs since the middle of 2010 (as with golf, a higher score is worse):

An abbreviated rundown
As you can see, the list contains CEOs from a variety of companies and industries.

It probably shouldn't be a surprise to anyone that four out of the 10 worst large-cap CEOs lead companies in the financial sector.

Both Goldman Sachs and Morgan Stanley have been simply hammered over the last few years. Goldman's troubles started when it was revealed in congressional testimony that it had underwritten bets for the likes of hedge fund manager John Paulson and others against its clients during the housing boom and bust. This was fueled by revelations that its managing directors referred to clients as "muppets." Further, its reputation was called into question recently for its role in the Facebook IPO debacle. Throughout all of this, however, Goldman continues being Goldman, making money and taking no names.

The same cannot be said for Morgan Stanley, the only major stand-alone investment bank besides Goldman to survive the financial crisis without being forced into liquidation, as Lehman was, or an arranged marriage, as befell Merrill Lynch and Bear Stearns. Earlier in the year, the deeply troubled institution was downgraded by Moody's to only one notch above junk status. In its most recent quarter, it reported a staggering 24% drop in revenue driven by declines in bond, currency, and commodity trading. And Morgan Stanley, too, felt blowback from its role in the Facebook IPO, after which its equity underwriting fees dropped precipitously.

The odd man out in this regard is New York Community Bancshares, a massive thrift with more than $40 billion in assets. As I noted recently:

There's a lot to love about NYB from the typical investor's perspective. It pays a 7.7% dividend yield, is highly capitalized with a tier 1 risk-based capital ratio of 13.65%, and is led by long-tenured executives with skin in the game … its president and chief executive officer, Joseph Ficalora, has worked his way up NYB's ranks since 1965 and holds shares in the company worth over $70 million.

Despite this, NYB likely came within Chiefist's crosshairs because its share price is sitting around $13 today after starting the year off at about $19. The reason? Investors are concerned that its overly generous dividend hampers organic growth and may eventually have to be cut.

The last financial company to make the list is Hartford Financial, the Connecticut-based insurance and financial-services provider. As my colleague Dan Caplinger recently pointed out, Hartford had a forgettable 2011, losing more than a third of its share price. The reason? Mother Nature, as the back half of the year witnessed an uptick in the number and severity of storms. This is compounded by unprecedentedly low interest rates that are killing a number of stocks. Some of its competitors have even stopped taking applications for long-term care insurance. For these reasons, even Hartford's 2.4% dividend yield hasn't persuaded Dan.

Last but not least of my highlighted stocks is struggling telecom Windstream. Like New York Community Bank, Windstream is another popular stock among dividend investors, sporting a ridiculous 10% dividend yield. In its most recent earnings release, the company met expectations on both revenue and earnings per share. But this hasn't stopped fellow Fool Dan Radovsky from postulating when -- not if -- Windstream will cut its dividend after the second-quarter unadjusted-dividend-to-free-cash-flow payout ratio shot up to an unsustainable 120%.

For anyone listening in on the last conference call, it was hard to dismiss the company's suspiciously vague defense. Responding to an analyst's comment that the "payout ratio looks like it [is] very, very high right now," the company's CFO noted only that: "I think taken in totality, we're very comfortable with the cash flow generation capabilities of this company." We'll see about that.

The common thread
Despite their differences, these companies have one thing in common: inferior share price performance. Indeed, as you can see in the chart below, all of them have been beaten by the S&P 500 over the last two years, with Morgan Stanley coming up short by nearly 75 percentage points. 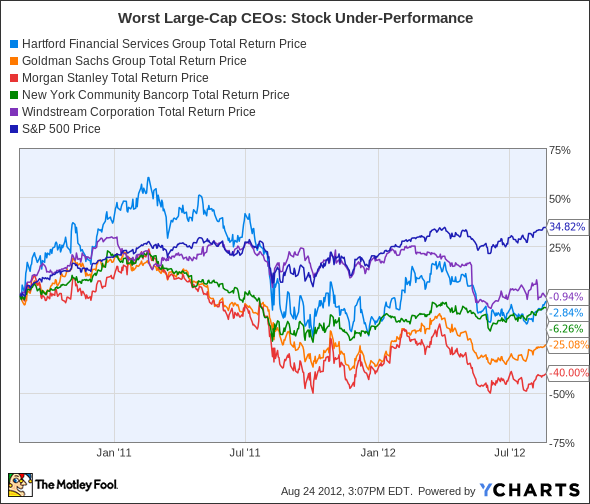 Fool contributor John Maxfield does not own shares in any of the companies mentioned above. Motley Fool newsletter services have recommended buying shares of Goldman Sachs. The Motley Fool has a disclosure policy. We Fools may not all hold the same opinions, but we all believe that considering a diverse range of insights makes us better investors. Try any of our Foolish newsletter services free for 30 days.

Déjà vu All Over Again: The 55 Greatest Wall Street Apologies of the Past 15 Years

How Goldman Sachs Now Thinks About Its Reputation