Please ensure Javascript is enabled for purposes of website accessibility
Log In Help Join The Motley Fool
Free Article Join Over 1 Million Premium Members And Get More In-Depth Stock Guidance and Research
By Alex Planes - Sep 11, 2013 at 10:03AM

Let's see what the numbers say about Arch Coal (ACI).

Investors love stocks that consistently beat the Street without getting ahead of their fundamentals and risking a meltdown. The best stocks offer sustainable market-beating gains, with robust and improving financial metrics that support strong price growth. Does Arch Coal (NYSE: ACI) fit the bill? Let's take a look at what its recent results tell us about its potential for future gains.

What we're looking for
The graphs you're about to see tell Arch Coal's story, and we'll be grading the quality of that story in several ways:

What the numbers tell you
Now, let's take a look at Arch Coal's key statistics: 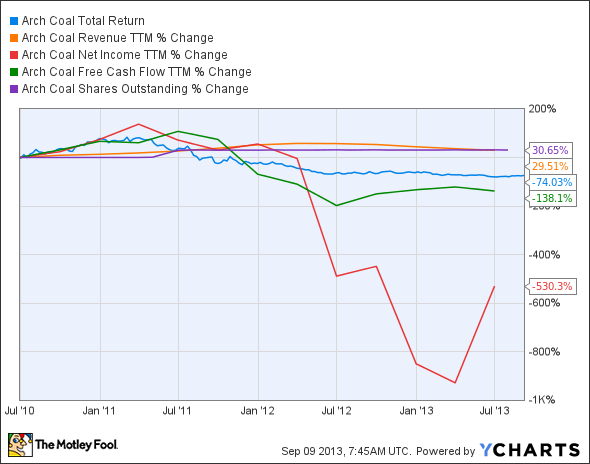 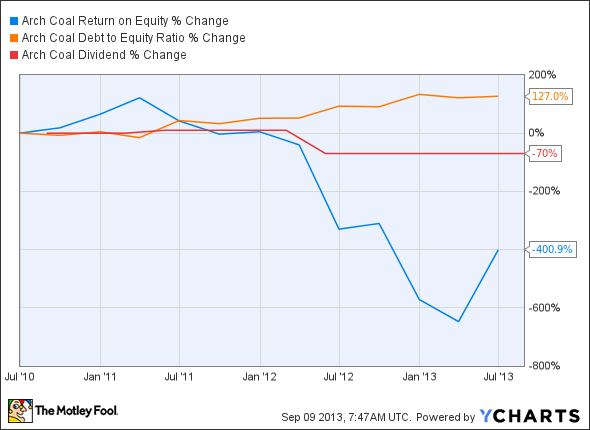 How we got here and where we're going
Arch Coal is more than a little smudged today. The miner's mustered only one out of nine possible passing grades. Although it missed slightly on revenue analysis, Arch Coal's single passing grade was granted more on a technicality than a genuine improvement. In addition, Arch Coal's free cash flow has fallen into negative territory, and it may not be able to support even its reduced distributions if the trend continues. Will Arch Coal be able to move past this weakness and rebound, or is the coal miner going to be tarnished for some time to come? Let's dig a little deeper to find out.

Global coal consumption has been steadily increasing this year, but cheaper natural gas prices continue to affect the profitability of major coal producers like Arch Coal and Peabody Energy (BTU). The market has been flooded with metallurgical coal, which might place limits on Arch Coal's ability to grow sales over the next few quarters. On the other hand, demand for thermal coal is expected to increase, but its prices are also in decline. My fellow Fool Neha Chamaria points out that Arch Coal and Peabody have both been cutting capital expenditures roughly in half in recent years to boost their profit margins.

China and the U.S. combine for a majority of the world's total coal output, but despite being the world's largest coal producer, China imported 192 million tons of coal in 2011. This already-huge sum is expected to grow to record levels of 310 million tons to 330 million tons this year. Increasing demand for coal in Chinese markets provides enormous opportunities for Arch Coal, and the miner has an ambitious plan to quadruple its exports by the end of 2020. However, China has also committed itself to reducing overall coal consumption by nearly 45% by 2020 due to environmental concerns, a draw down quite likely to affect Arch Coal's overall sales growth in the coming years. Alpha Natural Resources (NYSE: ANR) can also stunt Arch Coal's momentum in China, as it is already one of the leading suppliers and exporters of metallurgical and thermal coal to the Middle Kingdom.

My Foolish colleague Matt DiLallo notes that India's thermal coal imports have increased by more than 42% through June, which is largely due to construction of new coal-powered electric plants in the region. India's domestic coal producers have been unable to meet the increasing demand for thermal coal, which gives Arch Coal ample space to grow in the second most populous country in the world. However, Arch Coal has grappled with oversupply issues selling subsidiary Canyon Fuel Company, which constitutes non-core thermal coal assets, to privately owned Bowie for $435 million in cash. Arch Coal's competitor Alpha Natural Resources has dealt with similar issues by suspending the production of thermal coal at its Cumberland mine in Pennsylvania.

Putting the pieces together
Today, Arch Coal has few of the qualities that make up a great stock, but no stock is truly perfect. Digging deeper can help you uncover the answers you need to make a great buy -- or to stay away from a stock that's going nowhere.

Fool contributor Alex Planes has no position in any stocks mentioned. The Motley Fool has no position in any of the stocks mentioned. Try any of our Foolish newsletter services free for 30 days. We Fools may not all hold the same opinions, but we all believe that considering a diverse range of insights makes us better investors. The Motley Fool has a disclosure policy.