When we reached the depths of the recession, one prevailing thought was that we needed to innovate our way out of it if we were ever going to get back to economic health. After all, that's what we've done before.

In the '80s, the birth of the computer helped pull us out of recession, and in the '90s it was the Internet boom that drove growth after another recession. In the early 2000s, it was a boom in housing that drove GDP growth instead of a boom of innovation, although we found out later that housing was a bubble -- and we all know how that ended.

This time around, we needed an innovation boom to drive capital investment, research and development spending, and consumer spending once again. While those of us in the financial community were talking about the need for innovation, it was the business community that was actually making major advances. Where does the innovation boom stand now? You might be surprised by the progress we've made.

Electric vehicles are here
Since Henry Ford made the Model T a vehicle for the masses, there haven't been many monumental shifts in the auto industry. Models change and improve, but the pistons still go up and down, and we still go to a gas pump when our tanks are empty.

While most of us were worried about how to pay the bills during the recession, Tesla Motors (NASDAQ:TSLA) was working on a vehicle that turned the auto industry on its head. The Model S is the first electric vehicle that has made going electric conceivable for the masses. It gets nearly 300 miles on a charge, drives better than most sports cars, and doesn't need to be filled up at the pump.

What's more impressive is that the Model S has laid the ground work for a complete EV revolution. Charging stations are popping up around the country, and Tesla is supplying Toyota with drivetrains, while Ford, General Motors, Nissan, and others are quickly playing catch-up to get into this growing market.

Innovation in electric vehicles seemed to have happened overnight, and Tesla's Model S launch may later prove to be the point when the auto industry changed forever. That's no small feat of innovation.

We've struck black gold
Dependence on foreign oil has been a concern for decades, but over the past five years that fear has all but vanished. The reason? Fracking.

Halliburton (NYSE:HAL) has been one of the main technology developers and service suppliers for fracking to extract oil from rock miles beneath the earth's surface. One of the main products it supplies to the industry is chemicals that get pumped into wells along with water and sand, which allows for the underground fracturing and release of hydrocarbons. Of course, these are the same chemicals that are so controversial and Halliburton has been the target of its fair share of environmental complaints.

But without this company we may not be producing as much oil and gas domestically as we are today. That's where the real impact on U.S. oil production and imports has been dramatic. 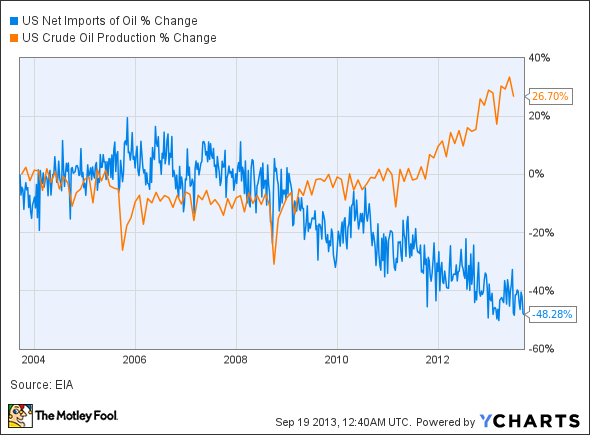 US Net Imports of Oil data by YCharts.

Since fracking became commonplace, net oil imports are down to 35.9% of consumption this year from 60.3% as recently as 2005. Fracking is another transformative innovation that took place during the depths of the recession and may eventually lead to U.S. energy independence.

Solar energy is here
Before the recession the solar industry was making progress cutting costs and becoming competitive with the grid. But the recession and subsidy cuts around the world put the industry into desperation mode -- something it's just emerging from now.

What you may not realize is that desperate times are when some of the best inventions and innovations take place. When your very survival depends on creating new products, new ways to cut costs, and new ways of doing business, it can result in extraordinary improvements.

The solar industry is a perfect example of this, experiencing the lowest of the lows and now emerging stronger than ever. In the past three years the residential and commercial solar lease has become commonplace, manufacturers have slashed costs, and efficiency has jumped across the industry.

Efficiency leader SunPower (NASDAQ:SPWR) now sells a panel that's 21.5% efficient -- nearly double what former industry leader First Solar was making just five years ago, and it's doing so at about the same cost per watt. The company is also developing a concentrator product for utility-scale projects that concentrates the sun's light seven times on a solar panel, helping bring down total energy costs by 20% versus competitors. There's also the rooftop business, which has brought solar to thousands of homes, schools, and businesses around the country.

Solar energy is now financially viable, and many of the innovations that made that happen took place during the recession -- an odd outcome from the near-death experience many companies had.

Cable TV is on its last leg
Ever since streaming video came onto the scene, it was the dream of millions to cut the cable. Netflix (NASDAQ:NFLX) first made the idea feasible and has grown to have more subscribers than cable powerhouse HBO. On any given night, the streaming service commands about one-third of the home Internet traffic -- an astounding level for a single company.

While Netflix led the streaming revolution, the next step in the transition from cable to streaming on TVs, tablets, smartphones, and other devices will come from content owners. Disney is leading the charge with Watch ESPN, Disney Channel, and Disney XD apps on Apple TV and mobile devices. Fox, NBC, HBO, and many others are also joining the fray, bringing us one step from a la cart streaming content instead of paying for hundreds of channels we never use.

Innovative apps and business models are coming from a media business that's extremely resistant to change, and I think there's more to come. Netflix is already turning the conventional industry on its head, building its own content. Last night the company won an Emmy award after receiving 14 nominations. The lines between content and distribution are beginning to blur, and Netflix is a big reason why.

Foolish bottom line
Maybe innovation in America isn't dead and it will lead us to strong economic growth after all. I've named four industries that have been revolutionized since the recession began, and I know there are examples of others. A decade from now we may look at this as an American innovation boom that no one saw until it was almost over.