Industrial biotech and renewable oils company Solazyme (NASDAQ:TVIA) hit investors with some surprising news when it reported third-quarter earnings. Management revised its 2013 guidance for total revenue downward by 25% and announced that its commercial scale facility being built in Moema, Brazil, with sugarcane supplier Bunge (NYSE:BG) would no longer begin operations in the fourth quarter after installing advanced quality control equipment. Instead, the facility will come online during the first quarter along with a commercial scale facility in Clinton, Iowa, being retrofitted with agricultural giant Archer Daniels Midland (NYSE:ADM). The move should reduce risk in the long term for investors, but the market wasn't very happy. 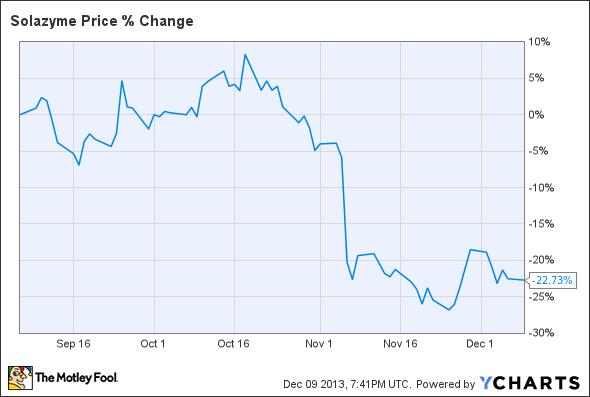 There were several sound reasons for shares to sink. Lower guidance was an obvious candidate, while investors were also reminded about the reality of share dilution now and in the future. But perhaps the biggest reason for caution was the uncertainty associated with production -- and therefore product revenue -- in 2014, which will be heavily aggregated in the second half of the year. Encountering even one setback during ramp up could have a detrimental effect on shares. Should it be a real concern for investors?

Additionally, focusing on scale-up in terms of individual tank volumes is a little outdated at this point in development. For instance, consider that moving from 128,000 liter fermenters to 500,000 liter fermenters is a fourfold increase in volume. That's nothing to sneeze at, but if we zoom out and focus on the entire biorefinery, we find that tank volumes mean little without optimized process scheduling.

What the heck is process scheduling? It's the term applied to the utilization and interdependence of all equipment involved in a given process. Engineers must be able to successfully handle and coordinate not just what occurs inside of a fermenter, but also what occurs before nutrients and microbes are added (upstream), what occurs during purification and separation (downstream), how quickly every task is completed, and maintain and clean all of the holding tanks and piping that make it possible. It seems a bit silly to focus on tank volumes when you consider the big picture.

Now, you don't have to be an engineer to see that (partially) proving 500,000 liter fermenters doesn't ensure smooth sailing for 2014. Consider that Solazyme's current facility in Peoria has an annual nameplate capacity of 1,820 metric tons. Moema and Clinton will have annual nameplate capacities of 100,000 MT and 20,000 MT, respectively. That roughly translates to a 55-fold and an 11-fold scale-up in process scheduling -- volumes of nutrients, buffers, cleaning agents, and the like -- respectively. That's a big leap that could lead to any number of potential setbacks and delays. Essentially, downtime is built into ramp-up. That doesn't mean delays won't happen, however. Problems will inevitably occur and it only takes one lingering obstacle to turn scheduled downtime into unscheduled downtime (i.e. a delay). Remember, Moema and Clinton represent the first time Solazyme will gain experience with its platform at commercial scale. There is no blueprint to follow.

Foolish bottom line
There's an old saying among process engineers: "Scale-up is more art than science." That simple and powerful phrase conveys the difficultly and unpredictability of process scale-up. Similar problems encountered at other industrial biotech companies should do the same. So while it's possible that Solazyme cruises through 2014 without any production setbacks, I don't think that's where investors or Wall Street should set the bar. I think it's best to prepare for additional delays.