Johnson appears to have an edge over Lilly in protecting and growing dividends thanks to new and upcoming drug launches.

However, threats to earnings may mean one of these two companies poses a greater risk to income investors. So, let's dig deeper into Johnson's and Lilly's product portfolios and pipelines to see which may be a better buy. 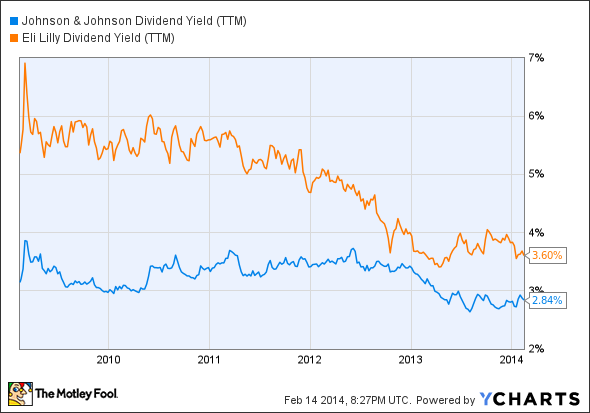 Rolling a boulder uphill
One of the biggest challenges facing drug companies is patent expiration and exclusivity. Drug makers plow tons of money into R&D, yet compounds discovered will only receive patent protection and exclusivity for a limited period of time. Once expired, between 70% and 90% of a drug's sales will migrate to generic competitors.

As a result, dividend payouts can suffer when big blockbuster drugs lose exclusivity. In the case of Johnson and Lilly, both companies are facing patent cliff challenges.

Johnson lost patent protection on $2.27 billion worth of sales last year when patents on heartburn medication Aciphex and anemia drug Procrit expired. As a result, sales of Aciphet slumped 44% to $470 million and Procrit sales --- despite not yet facing a biosimilar competitor in the U.S. -- still fell 7% to $1.3 billion in 2013. Additionally, Johnson is also navigating expiration for its ADHD drug Concerta, which went off patent in 2011. Sales of Concerta declined 27% to $782 million last year as generics from competitors like Mallinckrodt became available.

However, Lilly faces an even stiffer patent headwind given that its $5 billion a year depression drug Cymbalta lost protection in December. Despite facing generic competitors for less than one month, sales of Cymbalta plummeted 38% year-over-year in the fourth quarter. Adding to Lilly's patent struggle, the company also loses protection on Evista in March, putting another $1 billion in annual revenue at risk.

Given dividends at both companies already account for roughly half their earnings, patent expiration could mean there's less room for dividend hikes going forward. 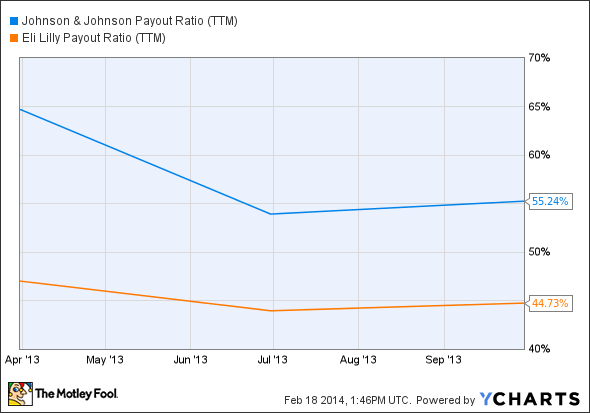 Making up the difference
Johnson is arguably better positioned to deflect its patent hit thanks to fast growing drugs like Zytiga, a treatment for prostate cancer. U.S. sales of Zytiga climbed 85% year-over-year to $211 million in the fourth quarter. Thanks to launches overseas, non-U.S. sales also jumped 89% to $284 million, bringing full year sales to $1.7 billion in 2013.

Johnson also has Simponi, an autoimmune drug that saw its sales jump over 50% to $932 million last year. Johnson's Stelara grew quickly too, with sales up 47% to $1.5 billion in 2013. Johnson also notched 57% growth for its antipsychotic drug Invega, which generated sales of $1.2 billion last year. And Johnson's anti-blood clotting drug Xarelto racked up $864 million in sales last year, up from $239 million in 2012.

Lilly doesn't have nearly the same depth in its product line. Lilly's fastest growing drug last year was ADHD treatment Strattera, which grew sales by 14% to roughly $700 million in 2013. As a result, while Lilly's dividend is unchanged since 2010, Johnson's has climbed. 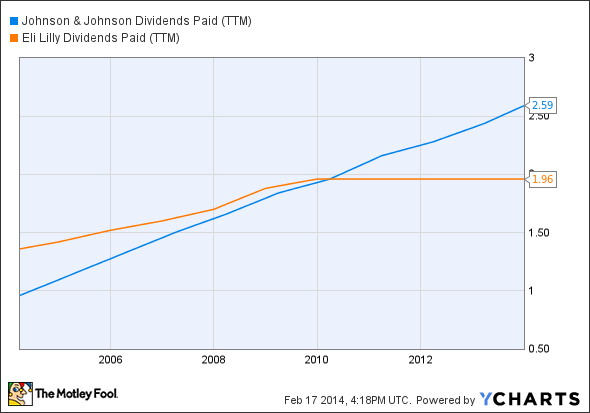 Piping up future growth
Investors also need to consider drug maker pipelines to see if there are dividend friendly drug launches coming. If pipelines are thin, its unlikely a company will be able to boost its dividend payout.

More winners may be coming too given Johnson is developing new drugs for rheumatoid arthritis, psoriasis, depression and pre-metastatic prostate cancer. Johnson's thinks it could file for approval in those indications by no later than 2017.

At Lilly, the pipeline is a bit thinner. Among the most intriguing of its upcoming drugs is dulaglutide, a GLP-1 analog diabetes drug. The GLP-1 space already has blockbuster drugs in Novo's Nordisk's Victoza and AstraZeneca's Byetta and Bydureon, however, dulaglutide outperformed Byetta in phase 3 trials and is dosed weekly like Bydureon. That advantage has analysts thinking dulaglutide could eventually generate peak annual sales of around $1.7 billion.

Lilly is also working on SGLT-2 inhibitor empagliflozin, a diabetes treatment co-developed by Boehringer Ingelheim. In studies, the drug significantly lowered blood glucose levels when combined with insulin. However, Lilly isn't the only one working on SGLT-2 inhibitors. Johnson's Invokana targets SGLT-2, and competitors Merck and Pfizer are developing ertugliflozin. AstraZeneca also recently got FDA approval for its SGLT-2 drug Farxiga.

Although the two aren't far apart in terms of current dividend yield, this review suggests Johnson may be better positioned than Lilly for future dividend increases. That said, Lilly is transitioning and if it can leverage margin friendly cost-cutting, we may find the company on more solid ground in a year or two.