Every quarter, large money-managers have to disclose what they've bought and sold via "13F" filings. While Fools don't always (or even usually) follow what the big money does, we can often glean an idea or two by tracing their footsteps.

George Soros, "the man that broke the Bank of England," has had one of the longest and best track records of any big name investor of the past half-century. Founded in 1969, Soros Fund Management averaged a whopping 20% annual rate of return from the time of its founding in 1969 to its closing to outside investors in 2011. With a current net worth of $27 billion, the 83 year-old Soros is still active in investing and philanthropy, having given away more than $8 billion over his lifetime.

According to the most recent 13F, three interesting trades his fund made last quarter were buying shares of tech titan Intel (INTC -2.27%) and oilfield services behemoth (and occasional public enemy #1) Halliburton (HAL -1.48%), while selling a big chunk of his shares in struggling retailer J.C. Penney (JCPN.Q). What can we learn from this living legend's moves? Let's take a closer look.

Moving on from Penney too early, or too late?
Penney's struggles over the past year have led to many (myself included) calling for investors to flee. Soros sold some 6 million shares last quarter -- nearly one-third of his holdings in the company. Considering that Soros' position was opened in the second quarter last year, he moved quickly to reduce his risk. Penney shares fell 38% over Soros' holding period: 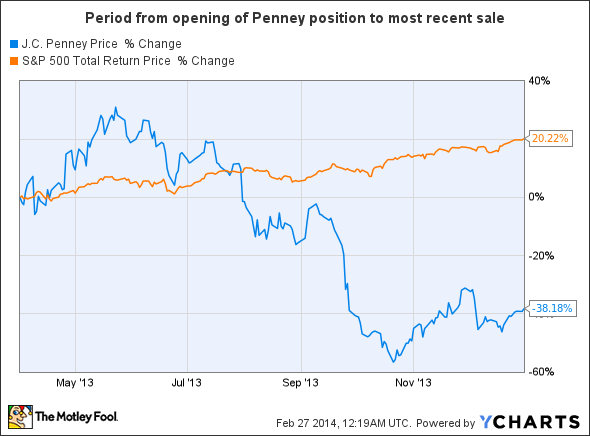 The thing is, Penney's just-announced earnings show a glimmer of hope, with the company reporting positive free cash flow for the full quarter for the first time in more than two years. I can't stress enough how important this one metric is to Penney's future. As I've written in the past, its relationship with suppliers -- which supply much of Penney's inventory on credit -- would be in serious jeopardy without sufficient liquidity.

Nonetheless, even this positive from the most recent quarter -- and what will probably be a decent run for the stock in the next few days -- doesn't hide the fact that sales are still more than 20% down from two years ago. It's one thing to be cash-flow positive in one quarter, and the biggest quarter of the year, at that, but it's not a guarantee of a return to growth, or even a promise of a full recovery, much less decent long-term returns for investors.

Strange bedfellows?
Considering that Soros once said it was "the central focus of my life" to unseat George W. Bush from the presidency, finding $280 million worth of a company once led by former Vice President Dick Cheney in Soros' portfolio may be a bit of a surprise. But considering that Cheney left the company more than 14 years ago, and that Halliburton is a central company to the production of oil and natural gas all over the globe, it shouldn't be a shocker to see a canny investor like Soros adding another 2.6 million shares to the 2 million already held.

Halliburton's leadership has made a commitment to return capital to shareholders. Last year alone, the company bought back some $4 billion in shares -- roughly 9% of shares outstanding -- while also increasing the dividend twice: 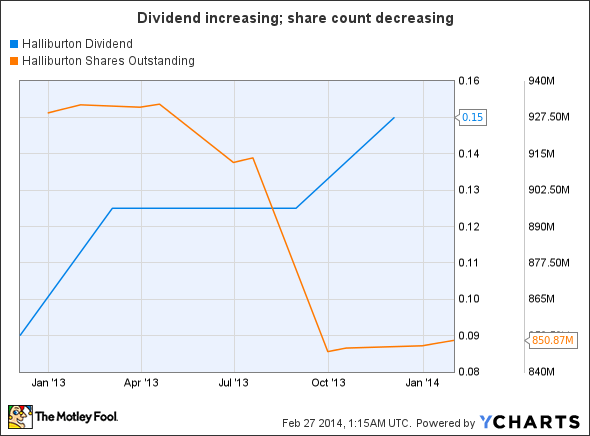 These two actions, if repeated, as management indicates is the hope, offer strong potential for per-share growth, even if the business' growth remains relatively muted. From CEO Dave Lesar:

During 2013, we demonstrated our strong commitment to delivering superior shareholder returns. We repurchased approximately $4.4 billion, or 10%, of our outstanding shares of common stock. We also increased our dividend twice during the year for a total payout increase of 67% over the quarterly dividend rate in 2012. These actions reflect our continued confidence in the strength of our global business outlook.

In the U.S., both onshore and offshore drilling is expected to increase in 2014, and global energy demand is only set to increase as the world's middle class expands by several hundred million people over the next decade. Sounds like better than just muted prospects. 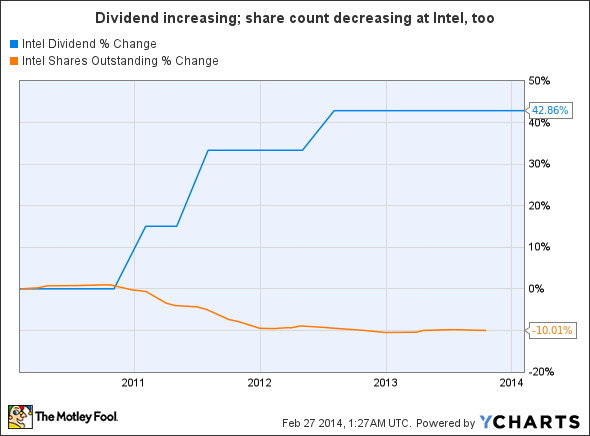 Since 2010, Intel has reduced shares outstanding by 10%, and also increased its dividend multiple times. The company does face some challenges, as is well known: Consumers are moving away from traditional PCs -- where Intel is the undisputed champ -- and toward mobile devices, where the company has just begun to gain some traction. However, Intel continues to invest heavily into R&D, and in the interim its fortress-like server business is still growing. This is a best-in-class business.

And much like Halliburton, if management keeps returning cash to shareholders, and buying back shares, even slow total growth won't hurt investors, because per-share growth will still remain strong.

Final thoughts: Don't follow blindly
Just as this article shouldn't be your sole reasoning for an investing decision, don't blindly follow Soros -- or any other investor -- into or out of any stock. All three of these companies feature risks to their business, as well as potential for upside. A good starting point is looking at what the best are doing, but that's not the place to finish.

How would these companies fit in your portfolio? That's up to you to figure out.