While many analysts and investors are still focused on the housing market and how their respective bank investments are handling the slow recovery and declining mortgage applications, there's a big opportunity that Wells Fargo (NYSE:WFC) and Capital One Financial (NYSE:COF) have been diving right into: auto lending.

Sales blitz
Even though the first few months of 2014 were slow for auto retailers largely due to unfavorable weather conditions, March has proved to be a rebound month for auto sales, which were up 7% for the month. With the majority of vehicles on the road today reaching the 10-year mark, there's a huge market for auto lenders to court. This year, vehicle sales are estimated to hit above 16.4 million.

Last year's 15.4 million vehicle sales led to a $79 billion addition to loan balances according to Experian's annual report on the auto finance market, with banks accounting for $27 billion of that balance. But even with the market still looking prime for growth, some of the top banks have lost their footing with market share of the lending business.

1. Losing the battle -- banks versus captives
There's often a tough battle going on between Wall Street banks and the auto manufacturer's captive financing operations for the vehicle lending business. While the top five lenders as of June 2013 were mostly banks, they lost out a bit in the last six months of the year. The banks' market share dropped 7.7% in 2013 while captives increased their share by more than 14%.

As of year-end, only Wells Fargo's Dealer Services operations and Ally Financial held more than 5% of the total auto-financing business. Toyota Motor Corp. (NYSE:TM), Honda, and Ford Motors' (NYSE:F) captive rounded out the remainder of the top five lenders.

For new lending, Bank of America (NYSE:BAC) lost 38% of its new financing share versus 2012, the largest decline for any lender.

On the other hand, both Wells Fargo's Dealer Services and Capital One's lending arm gained 9.5% and 10.8%, respectively. These two lenders have generally been at the top of the list for market share, so other banks could take a page from their operations handbook to gain more ground in new lending opportunities.

2. Consumers favor auto loans
A study from TransUnion found a surprising trend among borrowers' priorities: Most will pay their auto loans ahead of mortgages or credit cards. For more than a decade, auto loans have suffered far fewer delinquencies than both mortgages and consumer credit accounts. While the financial crisis caused a shift between the other two borrowing types, auto loans remained the winner in terms of consumer preferences: 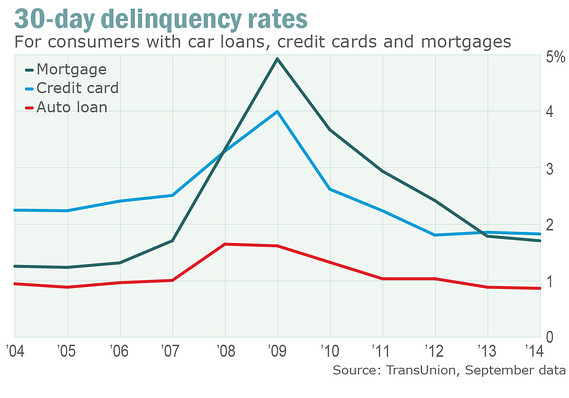 Even with an uptick in lending to subprime borrowers, the trend of delinquencies for both 30- and 60-day periods continues to decline. For the banks, delinquencies in both time periods have fallen by nearly 10% in 2013 -- the biggest decline among all lender types. Only 2% of bank auto loan balances fall within 30- and 60-day delinquency categories.

3. Favorable terms
Though the average loan rate has only ticked up by one basis point over the past year, other terms have increasingly favored lenders.

Consumers are entering loans with longer term periods, with above-six-year terms gaining popularity. Though this allows the consumers to pay a smaller monthly payment due to a higher number of payments, it will eventually result in higher interest for the loan if not paid in full before the term expires -- increasing bank revenue for the loan.

Another favorable trend is the increase in total amounts financed. The banks and other lenders have been relaxing some standards, allowing higher loan-to-value percentages and ultimately higher loan balances. This allows for more interest charges and higher revenue.

No-brainer
Though the housing market will remain the banking sector's lending bread and butter for the foreseeable future, auto lending can add a nice buffer to help offset the slowdown in new mortgage and refinancing activity. Consumers not only need new vehicles (and the loans that come with them), but they favor paying those bills over that of their homes and credit cards.

But with captive finance companies taking a bigger bite of the pie, banks are losing out on favorable loans that could boost their interest revenue and help balance their delinquency rates. With a keener focus on driving higher lending to vehicle buyers, banks could truly benefit from better terms and positive consumer trends.