Investors love stocks that consistently beat the Street without getting ahead of their fundamentals and risking a meltdown. The best stocks offer sustainable market-beating gains, with robust and improving financial metrics that support strong price growth. Does Kandi Technologies (NASDAQ:KNDI) fit the bill? Let's take a look at what its recent results tell us about its potential for future gains.

What we're looking for
The graphs you're about to see tell Kandi's story, and we'll be grading the quality of that story in several ways:

What the numbers tell you
Now, let's take a look at Kandi's key statistics: 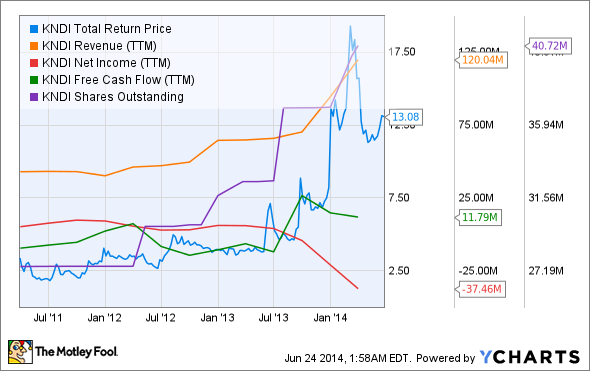 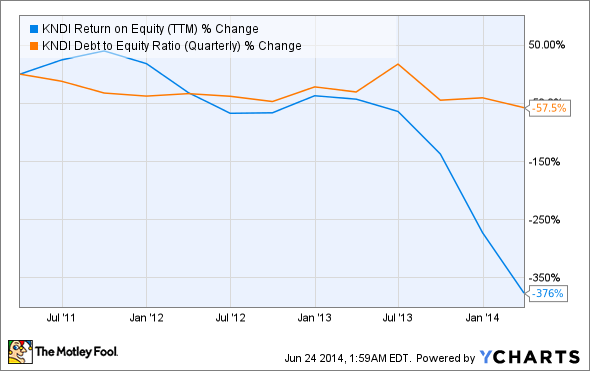 How we got here and where we're going
Kandi has been delicious for investors over the past three years, as share prices have nearly doubled -- however, the company's difficulty sustaining profitability has seriously hurt its score, which is an underwhelming three of seven passing grades here. The company's positive free cash momentum should encourage investors, but it's important to keep an eye on the income statement as well, and this has been moving a long way in the wrong direction in recent quarters. Can Kandi boost its bottom line and win over investors by 2015? Let's dig deeper to find out.

Kandi's shares have given up nearly all the ground gained after a near-double in January, and this massive drop (after a far more massive pop, to be fair) seems tied in no small part to CNBC talking head Jim Cramer's persistent drumbeat of negativity toward the Chinese EV manufacturer.

With such a large part of its float sold short, and with so little serious coverage of its actual business -- whether positive or negative -- Kandi's shares are constantly susceptible to massive moves. These moves have occurred with a gut-churning frequency, as Kandi's shares have oscillated by more than 5% in one direction or another 82 times since the start of 2013. Kandi has only had 72 trading days over the same time frame when it moved less than 1% up or down, making it something of a short-term trader's dream stock in a largely sedate market.

Part of the reason for Kandi's volatility is because no American analyst has yet stepped up to offer an opinion in one direction or the other. The general opacity of many Chinese-based businesses doesn't exactly encourage anyone on Wall Street to stick their neck out, and many analysts still remember with displeasure the wave of fraudulent Chinese shares that collapsed several years ago. What Kandi has reported has been generally very positive, as its top line is growing rapidly, and it has been the beneficiary of several Chinese EV initiatives, including a supply arrangement with the city of Hangzhou and an incentive program that will distribute nearly $10,000 in subsidies to Chinese EV buyers.

However, according to data compiled by Fool writer Leah Niu, Kandi's reports may be somewhat shady -- the firm that helped Kandi go public in the U.S. by reverse merger is currently being prosecuted by the SEC for stock manipulation schemes. With so little trustworthy information available investors should tread lightly around this highly speculative stock.

Putting the pieces together
Today, Kandi Technologies has some of the qualities that make up a great stock, but no stock is truly perfect. Digging deeper can help you uncover the answers you need to make a great buy -- or to stay away from a stock that's going nowhere.