Why did Marvel just release new ‘Star Wars’ and ‘Agents of SHIELD’ comics?

Disney's (DIS -2.21%) Marvel Comics just announced two new Star Wars comics and a new Agents of SHIELD series, which are aimed at tightening the bonds between its print comic and film universes.

Agents of SHIELD fans will get SHIELD #1 in December, the first issue of a new ongoing series that takes place in the official Marvel comics continuity. The series will be written by Mark Waid and feature a rotating series of artists. At Marvel's Comic-Con panel, Waid called the comic "the unlimited budget edition" of the TV show, which will return for its second season on ABC this September.

These two new comics address a point I recently made about Marvel Comics -- that its comics would be a great promotional tool for its shows and films. Therefore, let's take a look at what these new comics could mean for the future of Star Wars and Agents of SHIELD.

What new comics mean for Star Wars
Back in April, Disney rebranded all the novels, comics, and games in the Star Wars "Expanded Universe" as "Star Wars Legends," officially removing them from Star Wars canon. According to Disney, the entire Star Wars canon now only consists of the six films, The Clone Wars animated series and film, and the upcoming Star Wars: Rebels animated series in October. The decision was controversial, but it also establishes a clean slate for the new Star Wars trilogy, which will launch with Episode VII in December 2015. 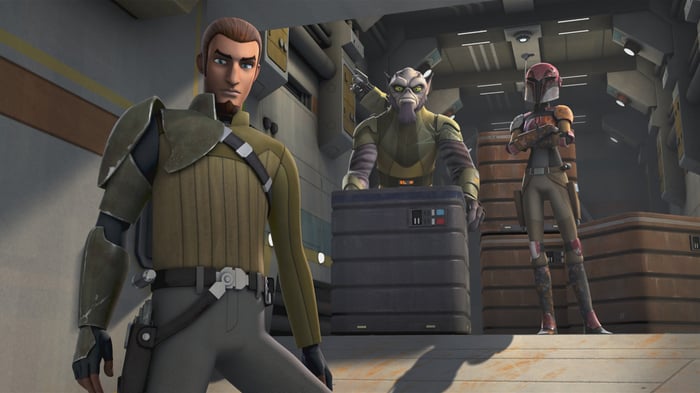 Launching two new comic books several months after the premiere of Rebels was a calculated move. Rebels will take place between Episodes III and IV, 14 years before the foundation of the Empire and five years before the destruction of the first Death Star. The two comics, Darth Vader and Princess Leia, will clearly take place within that same time frame, reintroducing the classic characters to older and younger readers alike. Rebels, Vader, and Princess Leia could also introduce new characters to the official Star Wars series who might appear in the new trilogy.

Considering that the new Star Wars films are guaranteed blockbusters, these comics might grow into a new universe of Marvel Star Wars comics, which could lead to higher sales at Marvel's publishing business.

With the Agents of SHIELD show, we got tie-ins with main Marvel films like Thor: The Dark World and Captain America: The Winter Soldier. Characters like Nick Fury, Maria Hill, and Lady Sif all crossed over to the small screen. With a parallel comic book universe, we get a third layer of crossover opportunities -- the comics can feature side stories related to TV episodes as well as the films. This could be a great chance to cross-promote the comic, TV show, and Marvel Cinematic Universe films, connecting readers or viewers of one to all three.

This also isn't the first time that the SHIELD characters on TV have starred in a comic. Marvel and Toyota's (NYSE: TM) Lexus recently launched Lexus Presents: Marvel Agents of SHIELD in The Chase, a one-shot comic that takes place after the 12th episode of the first season, "Seeds." The comic prominently featured the team's modified Lexus GX 460, which has been seen in several episodes. Lexus' interest in advertising in both the show and the comic raises an interesting idea -- what if the product placements in the show carried over to the comic? Would other companies, like Honda (the SHIELD MDX) and General Motors (Coulson's Corvette, "Lola"), be interested in paying a little more to advertise in the print comics as well?

While an Agents of SHIELD comic would certainly present exciting opportunities, the writers would also need to exercise restraint while developing the stories, since over-the-top story arcs could easily break the cohesive continuity with the TV and film universe.

The Foolish takeaway
In conclusion, it's encouraging to finally see Disney finding new ways to connect Marvel Comics into the rest of its media empire.

Disney doesn't disclose how much revenue comes from Marvel's print comics, but in 2008, its last full year prior to Disney's takeover, Marvel reported $125 million in publishing revenue. Considering that revenue from North American comic book sales rose 20% between 2008 and 2013, we can assume that Marvel's print comics now generate roughly $150 million per year. But that's still a drop in the bucket compared to the $45 billion in annual revenues that Disney reported last year.

A new universe of Star Wars comics could draw in new readers, expanding Marvel's print universe beyond its well-known superheroes and generating more publishing revenue in the process. A new Agents of SHIELD comic would also be a great promotional tool for the show and films, and could also present unique advertising opportunities with product placements within the comic.

Therefore, it will be interesting to see if Disney has other plans to strengthen the connections between its print comic and live-action universes.