Please ensure Javascript is enabled for purposes of website accessibility
Free Article Join Over 1 Million Premium Members And Get More In-Depth Stock Guidance and Research
By Brian Feroldi - Jul 28, 2015 at 7:03AM

Big biotech companies are flush with cash and are using it to reward shareholders. Here are three companies that are spending big on share buybacks.

Large-cap biotech stocks have been on a tear over the past few years, crushing the overall market return. Thanks to strong execution and a slew of new drug launches, these companies have found themselves flush with extra cash and have announced multibillion-dollar buyback programs. But are these share repurchase programs big enough to move the needle?

Three companies, in particular -- Celgene (NASDAQ: CELG), Biogen (NASDAQ: BIIB), and Gilead Sciences (NASDAQ: GILD) -- have announced huge share repurchase programs. Each of these companies has crushed the S&P 500 over the past five years, producing multibagger returns for investors, thanks in part to these companies' willingness to buy back their stock. 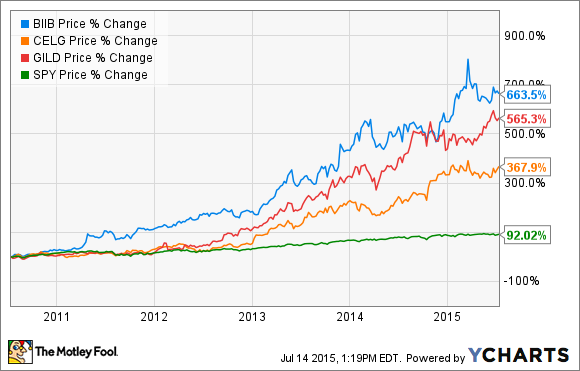 Let's dig in to each repurchase program for clues as to which one we should be most excited about.

1. Celgene
First up is Celgene, which has been posting terrific revenue and profit growth thanks largely to Revlimid, its blockbuster multiple myeloma drug. Celgene recently announced that it authorized adding $4 billion to its existing share repurchase program. When combined with its previous buyback authorization, Celgene now has the green light to repurchase about $5.2 billion worth of its common stock on the open market.

Celgene has a strong history of successfully buying back its stock, having returned approximately $12.3 billion to shareholders through repurchases since 2009 alone. These buybacks have meaningfully brought down the outstanding share count over the past five years, which has created a lot of value for shareholders. 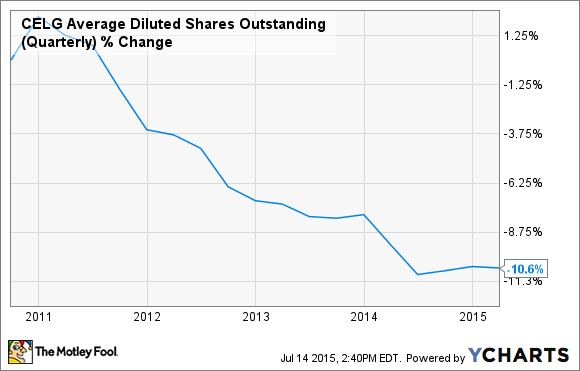 With a current market cap of around $97 billion, if Celgene is able to repurchase all of the authorized $5.2 billion of its stock, it should reduce the number of shares outstanding by about 5% -- and if history is any indicator, shareholders are poised for continued earnings growth from here.

2. Biogen
Biogen has seen huge sales growth in recent years thanks in large part to the success of its blockbuster multiple sclerosis drugs Tecfidera and Avonex. Biogen also has a long history of repurchasing its own stock; however, up until this point, these share buybacks have mostly been used to offset employee share-based compensation, as opposed to bringing down the share count. 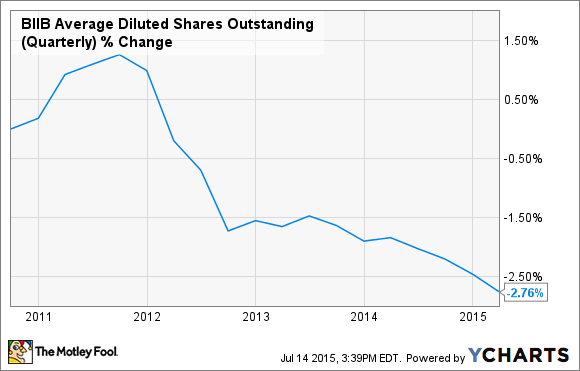 However, the share count may be poised to drop precipitously from here, as in May the company announced a $5 billion share repurchase program. When combined with the approximately 1.3 million shares remaining under previously-announced programs, Biogen could finally be poised to meaningfully reduce its share count. With a market cap of around $95 billion, Biogen has the potential to reduce its share count by about 5%.

3. Gilead Sciences
Last on our list is Gilead Sciences, which already has a good history of using share buybacks successfully. Shares outstanding have declined by more than 7% over the past five years. 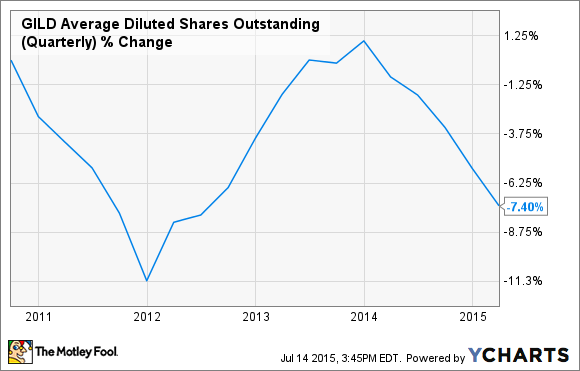 Thanks to the ridiculously successful launches of hepatitis C drugs Sovaldi and Harvoni, revenue and profit growth rates have simply been jaw-dropping. Better yet, sales growth looks poised to continue from here, thanks in part to the the recent approval of Harvoni in Japan.

Gilead went big recently with its decision to return cash to shareholders, as the company announced a massive $15 billion share buyback program. When added to the $3 billion that the company has remaining from a previous program, Gilead has more than $18 billion in firepower to bring down its share count.

Gilead sports a huge $172 billion market cap at the moment, but if the company is successful in spending all $18 billion, then it has the potential to bring down its shares outstanding by more than 10% in the coming years.

Which one to buy?
While all three of these buybacks could reward patient investors, I'm personally most excited about the prospects for Gilead's stock in the years ahead. Its massive buyback program looks like it could significantly drop the company's shares outstanding. Gilead also started paying a dividend that currently yields 1.5%. When you consider that shares currently trade under a measly 11 times 2016 earnings estimates, Gilead appears to be poised to be a great investment from here.