Please ensure Javascript is enabled for purposes of website accessibility
Log In Help Join The Motley Fool
Free Article Join Over 1 Million Premium Members And Get More In-Depth Stock Guidance and Research
By Justin Loiseau - Jul 29, 2015 at 10:02AM

General Electric Company is cutting fat for the Fed.

General Electric Company (NYSE: GE) raked in more revenue last year than the GDP of the 50 smallest countries on planet Earth -- combined. With assets aplenty, it should come as no surprise that GE is constantly in regulatory rigmarole. But the Fed is cutting General Electric Company some slack, at least for now. Here's what you need to know.

Too big, too frail?
When the Great Recession rolled around in 2010, the Federal Reserve launched an offensive against some of the clunkiest corporations around. While GE stayed out of the bailout headlines, the corporation didn't escape Ben Bernanke's eye. According to the Fed and its Dodd-Frank law, General Electric Company is "systemically important" to the U.S. economy. In other words, if GE goes bust, Uncle Sam is up a creek without a General Electric hydroelectric turbine.

For shareholders, "regulation" can spell disaster. It can mean business interruptions, expensive accounting, distracting lawsuits, and dictated downsizing. In GE's case, the latter is certainly true. GE Capital, the company's financial arm, reported $501 billion in assets in 2014. If this business unit stood by itself, it'd be the seventh biggest bank in America. 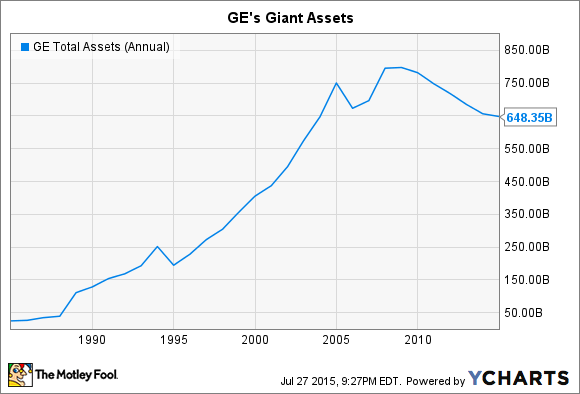 The Federal Reserve has mandated that CEO Jeff Immelt get his gargantuan company under control -- and for once, shareholders should rejoice. Immelt's own plans are well aligned with the Federal Reserve's. Each wants General Electric Company to become a lean, mean, manageable machine.

Farewell finance
Of its own volition, GE is selling off almost its entire GE Capital business. To date this fiscal year, it's signed a whopping $68 billion off its books and has plans to close out $100 billion by the end of fiscal 2015.

For shareholders, GE estimates that over $90 billion of this downsize will be returned to investors through various channels by 2018. And as General Electric offloads its assets, the Federal Reserve is giving the company a carte blanche on stricter financial regulations. Since Immelt's intentions already align with many of the Fed's mandates, it's getting a pass on arduous financial stress tests for the next three years as its cuts assets and realigns itself as an industrial corporation.

Of course, billion-dollar transitions aren't without their hiccups. Just last month, the Justice Department filed an antitrust lawsuit seeking to stop the $3.3 billion sale of GE's appliance division to Sweden-based Electrolux. But a bungled sale is hardly the same as a corporate shakedown, and General Electric is getting out while the getting is good.

What now?
For GE shareholders, this asset sale necessitates a critical eye -- does GE still deserve a place in our portfolios? As a General Electric Company shareholder myself, I believe it does. GE has staved off "diworsification" -- the trouble a company gets itself into when it diversifies into businesses where it has no comparative advantage. GE found itself expanding into businesses it had no business being in. The financial sector is fraught with failure and is a regulatory nightmare -- two things an industrial company (and its shareholders) neither wants nor needs.

The recent news that regulators are holding off on haranguing GE is further music to my ears. Corporations that can preempt regulatory change by making sensible decisions enjoy an inherent advantage over their competitors. It's the reason I invest in renewable energy companies -- and not in coal corporations.

By 2018, General Electric will be a different company than it is today. Jeff Immelt will achieve his goal, the Fed will breathe easy, and shareholders will reap the rewards of returned value. Now that's a regulatory roller coaster I'm ready to ride.

Justin Loiseau owns shares of General Electric Company and an air-conditioning bill he would like to downsize. The Motley Fool has no position in any of the stocks mentioned. Try any of our Foolish newsletter services free for 30 days. We Fools may not all hold the same opinions, but we all believe that considering a diverse range of insights makes us better investors. The Motley Fool has a disclosure policy.