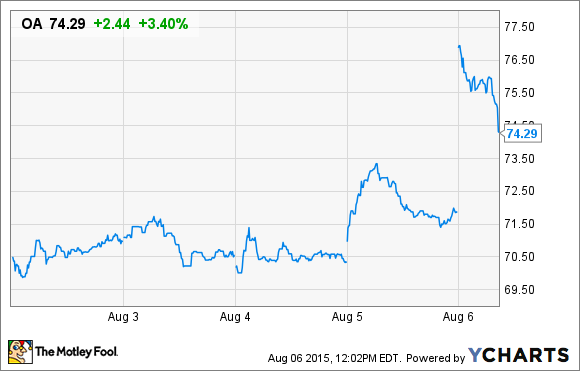 Fresh off its spinoff of target sports supplier Vista Outdoor, and its merger of rocket scientists Orbital Sciences and Alliant Techsystems, the new and improved Orbital ATK (NYSE:OA) is looking like a force to contend with in the field of rocket tech.

On Thursday, Orbital ATK earnings came out for the fiscal second quarter 2015, and the news was nothing short of glorious:

Given the difficulty of comparing Orbital ATK's merged results with the numbers produced by its component companies in years past, investors are probably best advised to value Orbital ATK stock on what it's likely to do going forward -- not what it's done in the past, impressive as these past results are. So what does management have to say on that front?

According to CFO Garrett Pierce, strong year-to-date results have encouraged management to raise its "financial guidance for calendar year 2015 revenues, operating margin and earnings per share." The company now expects to deliver this year:

At today's market capitalization of $4.5 billion, this all values the company at roughly:

That last valuation is the only one that's really worrisome. When you factor Orbital ATK's $1.5 billion debt load into the picture, the stock's enterprise value rises to about $6 billion, and its enterprise value-to-free-cash-flow ratio to about 24. Given that analysts who follow Orbital ATK expect the company to post profits growth in the 18%-per-year range during the next five years, a 24 EV/FCF ratio could be expensive. That said, in light of the attractive P/S and P/E numbers -- and the superb performance this past quarter -- I have to say that I'm actually prepared to give Orbital ATK the benefit of the doubt on EV/FCF.

Two out of three valuation metrics ain't bad. And on two out of those three, Orbital ATK stock looks very "buyable" indeed.