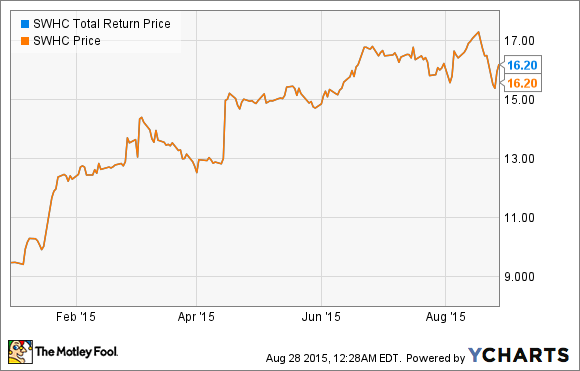 Smith & Wesson stock has climbed high this year -- and could have more room to run. SWHC total return price data by YCharts.

Gunmaker Smith & Wesson (SWBI -1.83%) reported fiscal first-quarter 2016 earnings last week -- and the crowd went wild. After-hours trading post-earnings saw S&W shares surge 6.2%, which, on top of the shares' 1.7% run-up during ordinary trading hours, brought the stock to within a whisker of an 8% gain for the day.

Was it justified? That's what we're here to find out, so let's begin with the highlights.

Perhaps the best news of all was the improvement in free cash flow. While S&W is still not generating anywhere near as much cash from its business as its income statement suggests, operating cash flow was still up 54% year over year, while capital spending was down 46%. Result: Whereas one year ago S&W was running free cash flow-negative -- burning cash even as it reported strong GAAP profits -- this time around, S&W generated an honest-to-goodness cash profit. Free cash flow for the quarter came to $8.7 million.

Commenting on the results, CEO James Debney said S&W's sales and profits both "exceeded our expectations," with M&P15 Sport rifles, Thompson/Center Arms bolt-action rifles, and M&P Shield polymer pistols all being strong sellers in the quarter. Based on the strong first-quarter results, management is also tweaking its guidance for the current fiscal second quarter and for the full fiscal year.

Valuation
Assuming this is how things play out, Smith & Wesson, which earned $0.90 per share last year and $0.90 over the past 12 months as well, will grow earnings 10% to 15% this year. Its P/E ratio, currently at 18 based on trailing results, will accordingly fall to just 15.6.

That's not a half-bad price for a near-term 15% grower, even without a dividend. The stock looks even more attractive when you consider that free cash flow at Smith & Wesson, according to data from S&P Capital IQ, now shows an even $100 million generated over the past year. At an enterprise value of just over $1 billion, that makes for an EV/FCF ratio of just 10 -- a fair price even if Smith & Wesson grows profits no faster than 10% annually over the next five years. Meanwhile, analysts who follow the stock continue to project long-term earnings growth of 14%.

Long story short: You can comfortably go long on this stock.

Rich Smith does not own shares of, nor is he short, any company named above. You can find him on Motley Fool CAPS, publicly pontificating under the handle TMFDitty, where he's currently ranked No. 260 out of more than 75,000 rated members.