Potential legal liabilities represent uncertainty for the discount hardwood retailer. But beyond this caveat, the company is proactively reshaping its business.

Now that the master carpenter, the market, has taken a power saw to Lumber Liquidators' (LL -0.61%) stock, producing a recent price chart that sports no more vertical dimension than the hardwood flooring the company sells, perhaps it's time to blow off the sawdust and look for any signs of value left after the cutting.

A great deal of uncertainty exists over the numerous lawsuits filed against the company, due to the alleged presence of formaldehyde in portions of its Chinese-sourced laminate flooring. This legal imbroglio includes the dismaying sight of Lumber Liquidators' insurers filing suit against the company -- to avoid having to pay claims if cases are settled against it.

If we can safely suppose that the company will be able to meet or thwart future claims without breaking its ability to continue as a going concern, we might be tempted to conclude that an investment at this time is at least worth considering. That's a significant caveat, all the same, the company's recent execution is better than it appears at first glance.

Flooring on the move
Given the negative publicity surrounding Lumber Liquidators, which appeared to peak over the spring and summer, shareholders might have expected to see the organization's inventory account begin to bloat in the first and second quarters, as customers stayed away on safety fears, and product sat unwanted in showrooms.

Yet surprisingly, this isn't the case. In the first two quarters of this year, inventory turns, that is, the speed of inventory through the system, have actually picked up pace. We can see this clearly in "days inventory outstanding," a measure of how quickly a company converts inventory to sales. 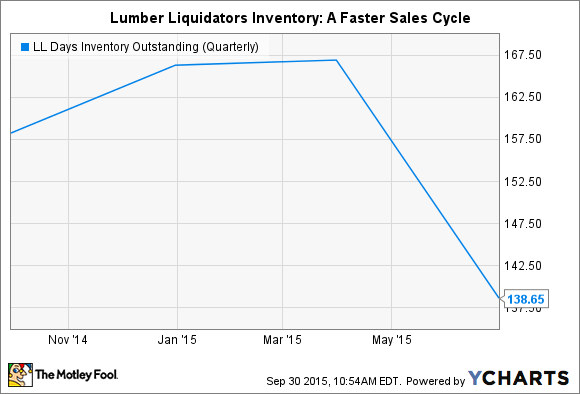 It would be mistaken, although a good guess, to assume from this chart that management decided to take its lumps and write off a significant chunk of China-sourced laminate flooring. Such a write-off would lead to an immediately smaller inventory total, thus speeding up inventory turns.

Notably, Lumber Liquidators' management has suspended sales of the $19.8 million in Chinese-sourced laminate flooring it still holds, but it hasn't removed the product from its books yet.

Generally accepted accounting principles (GAAP) require that a company value its inventory at the lower of cost or market value. According to Lumber Liquidators' Q2 2015 report (filed on August 8, for the quarter ended June 30, 2015), the Chinese laminate is valued at cost. So management is implicitly saying that at present the market value of the laminate exceeds what the company paid for it.

Realistically, it's likely only a matter of time before this laminate gets adjusted off the books. By year-end, when management has had more time to assess the viability of putting this product back in stores, shareholders can expect to see it removed via a charge against earnings.

Why Lumber Liquidators is accelerating products through its system
In the absence of a charge-off, the key thing the inventory decline tells us is that customers aren't deserting the company -- they're being courted heavily through discounts, and snapping up deals while the company adjusts its flooring mix going forward.

Proactively selling inventory, even at a discount, rather than sitting in denial, benefits the company as it increases liquidity (the ability to pay current bills with assets on hand). Evidence of this benefit leaps out in its "inventory to working capital" ratio, which measures a company's ability to turn inventory into good old cash.

Typically, the lower the ratio, the better, as too much inventory versus working capital implies that liquidity is tied up in products languishing in warehouses and stores. Note below how this ratio peaked toward the end of 2014, but is quickly heading back down as management has scrambled to deal with the 2015 laminate crisis:

Why is inventory again so important? Lumber Liquidators sells nearly everything through retail stores, so it doesn't have any trade receivables on its books. This means that inventory is the primary driver of the company's liquidity. With a consumer-centered, retail business model based on a single consumer product, which is bought by many customers only once or twice in a lifetime, the imperative for Lumber Liquidators is to move product every day, or face the consequences.

Simplification, potential margin rebound, and risk
After resuming the CEO chair in May of this year, founder Thomas Sullivan has stated that he wants to "simplify" the business and focus on customer service and rebuilding the brand. Simplification efforts Sullivan has identified include reducing duplicate styles, discontinued products, and SKU count, while increasing the mix of more popular U.S. and European laminates, engineered hardwood, and bamboo.

Simplification won't be an overnight process, and a return to the 40%-plus gross margins the company enjoyed while selling the Chinese-sourced laminate isn't in the cards anytime soon. It recorded a gross margin of 25% in Q2 2015, a decline of 15%, as it moved inventory with haste as described above.

Yet 4.5% of the lost margin was due to business adjustments that can be characterized as one-time events, both related and unrelated to the laminate issue. Another 2% of lost margin, related to countervailing duties charges, is nominally one-time, although it may recur at least once more.

Thus, a total of 6.5% of gross margin that can potentially be regained within the next year without even turning to sales increases. This would place the company in spitting distance of the 32%-35% gross margin range, with which it was consistently profitable between 2007-2012, before margins started to suddenly expand. The same recapture potential exists "below the line," with another 4.5% of one-time general and administrative charges identified by the company in Q2 2015.

Of course, Lumber Liquidators incurs the risk that new charges against gross margin and general and administrative expenses will keep cropping up, as it deals with the issues its founder will try to put behind the company.

Prospective investors should be aware of another risk: If the company can't get its product selection right, it may find itself in a "no man's land" in relation to its brand proposition. This is because the chain is positioned in the marketplace as a liquidator, but no longer has that cheap, high-margin, Chinese-sourced laminate to sell. Lumber Liquidators has to convince customers that they'll be able to purchase higher quality flooring, while still getting a great deal in its stores.

Down but trying to prove with all energy that it's not out
Can this once-stellar investment regain some semblance of forward motion anytime soon? On the positive side, Lumber Liquidators is carrying a lower inventory, operating more nimbly, and has the opportunity to ramp up its store opening schedule in the future once all this dust of uncertainty settles. And we should keep in mind that the company hasn't engaged in any cost cutting yet, nor tried a restructuring of its business, both of which could improve margins in the coming quarters.

As we've seen, if Lumber Liquidators emerges from the unknowns of future liability, the initial mechanics for a turnaround are already in place. For now, the flooring chain should continue its ongoing crisp inventory management and solve the puzzle of optimal mix in its showrooms if it wants to convince the master carpenter to start rebuilding its stock.

Asit Sharma has no position in any stocks mentioned. The Motley Fool owns and recommends Lumber Liquidators. We Fools may not all hold the same opinions, but we all believe that considering a diverse range of insights makes us better investors. The Motley Fool has a disclosure policy.