What: According to S&P Capital IQ, shares of specialty flooring retailer Lumber Liquidators (NYSE:LL) fell 13% in September. This is especially disappointing for investors who saw the stock shoot up as much as 37% from early August through mid-September, before beginning another sell-off to end the month. So far this year, that puts the company's stock down an ugly 79%. 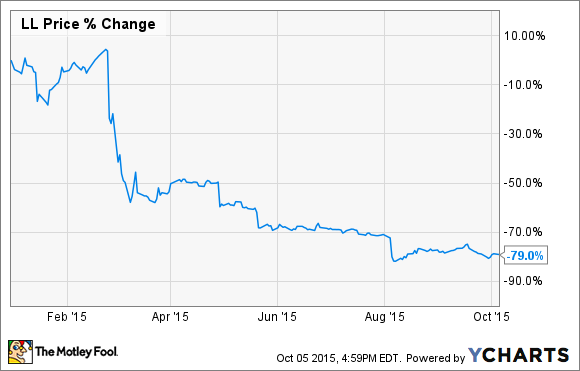 So what: Most of those reading should already know the saga of Lumber Liquidators this year, with a short seller-led attack accusing the company of sourcing and selling Chinese-made laminate with potentially hazardous levels of formaldehyde. If not, go here for the in-depth version. The short version is that the company has vehemently denied the claims, especially following a nationally broadcast segment on the TV news program 60 Minutes, which also did its own testing with results that supported the accusations of dangerously high levels of formaldehyde.

The issue, of course, gets back to the kind of testing done. Lumber Liquidators and essentially all of its industry, which uses laminate composites in its products -- including flooring, cabinets, countertops, and much of the furniture in the average American home -- have come out strongly calling the testing methods into question.

The thing is, consumers stayed away in droves immediately after the 60 Minutes segment aired, and even though traffic leveled off in the weeks that followed, as of the last quarter, sales were still below prior levels.

Now what: The company still has plenty of potential risk and maybe even legal exposure. The U.S. Consumer Product Safety Commission's investigation is ongoing, and a few months ago Lumber Liquidators pulled all of its Chinese-made laminate flooring off store shelves, when the California Air Resources Board -- or CARB -- told it that some follow-up tests indicated potentially high levels of formaldehyde emissions.

As things stand today, the company's stock is likely to bounce around a lot until there's more certainty, and that's going to require the CPSC to finally report the findings of its investigation, which is now more than six months old. There's also potential for enforcement if CARB finds that it was selling products that failed to meet its standards.

It's pretty much like this: If CARB and the CPSC find that Lumber Liquidators was indeed selling potentially harmful Chinese laminate, it's going to get even uglier for the stock. I don't think it kills the long-term potential for the company, but it would be very painful in the short term for shareholders and the company.

But if CARB and the CPSC don't find that the Chinese-made laminates are hazardous, or in violation of CARB's regulatory rules in California, then the short case for the company will be pretty much undone, and the stock probably shoots up:

After all, nearly half of the company's shares are held short: 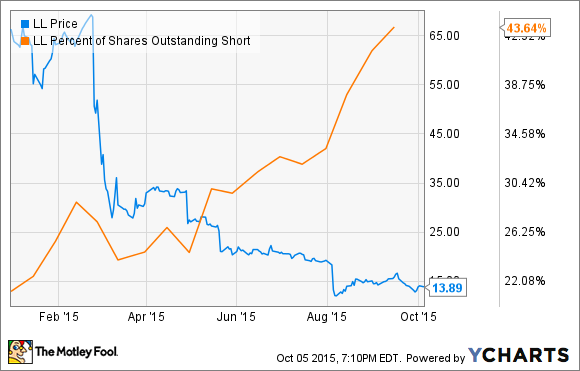 If the company gets past the current investigations without any terrible news, this could be a huge bounce-back stock. But that outcome is a coin toss, frankly.

For now, it's probably best for anyone not willing to take a loss to sit this one out. But if you're willing to take on a lot of risk, the near-binary outcome that any good news could have on such a heavily shorted stock is very tempting. Just bear in mind that this is as close to gambling as it gets in a stock, at least in the short term.