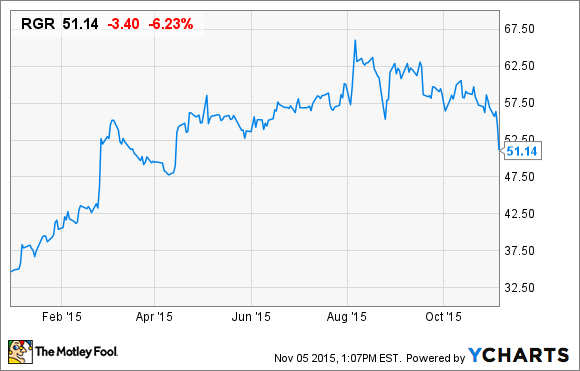 Sturm, Ruger stock made a lot of gains this year -- and now has given about half of them back. RGR data by YCharts.

Shares of gunsmith Sturm, Ruger (NYSE: RGR) tumbled more than 3% on Wednesday, and that wasn't even the bad news.

The bad news this week? That 3% decline in share price at Sturm came before the company reported earnings. By Thursday, though, the earnings had come out -- and Sturm shares sank a further 5%.

As a result, as of this writing, Sturm, Ruger shareholders are now looking at a 9% loss on their investment over the course of less than 24 hours. So what went wrong?

Announcing financial results for its fiscal third quarter 2015 Wednesday evening, Sturm, Ruger reported profits of $0.62 per diluted share on sales of $120.9 million. Given that last year, Q3 results featured profits of only $0.34 per share on revenues of $98.3 million, that probably sounded like good news -- 23% growth in sales and an 82% improvement in profits.

Problem was, analysts had been telling investors to expect profits of $0.70 per share, and sales of $122 million. Result: Sturm, Ruger missed on sales, and it also missed on earnings -- by 11%.

What went right
Investors are rightly disappointed at Sturm, Ruger's twin miss on sales and earnings. But not all this week's news was bad. For example, if you look past the GAAP numbers to see how well Sturm, Ruger's business is doing at the crucial task of generating cash profits, it's actually doing quite well.

Cash from operations during the first three quarters of this year has more than tripled -- versus last year's first nine months -- to $94.9 million. At the same time, capital spending actually declined by 15%. As a result, free cash flow at the gunmaker now stands at $70.4 million. If it continues growing at current rates, Sturm is on course to produce nearly $94 million in positive cash profits this year -- perhaps even more, as expectations are for capital spending to continue to moderate, and for Sturm to end the year with only $30 million spent on capex.

Valuation
With $45 million in reported net income year to date, Sturm, Ruger is on course to earn $60 million in net profit by year-end. At $958 million in market cap, this means that Sturm, Ruger stock currently sells for the modest valuation of just 16 times likely current-year earnings. Incidentally, that's about 18% cheaper than the valuation of 19.4 times earnings at Sturm archrival Smith & Wesson (NASDAQ: SWHC).

Smith & Wesson, which is expected to report its own earnings results later this month, isn't faring as well as Sturm on the sales front, or the profits front, either. Last quarter, the company reported 1% earnings shrinkage on a 12% rise in sales. That's basically the opposite of Sturm's latest results.

Foolish takeaway
Analysts following Sturm, Ruger who are quoted on S&P Capital IQ still peg Sturm earnings growth at just 5% annually over the next five years. For whatever reason, they see Smith & Wesson earnings growing twice as fast -- 12%. If they're right about that, though, then even a 12.7x valuation may be too rich for Sturm stock to support.

Personally, though, I do not think analysts are right -- at least not about Sturm, Ruger's earnings prospects. As I've explained previously, there's a new presidential election cycle heating up, and last month, Democratic candidates for president put gun control front and center on the stage at their October debate. Seems to me that this is the kind of issue that will soon send gun owners flocking to their gun stores to load up on any weapons and ammunition that are deemed (however wrongly) to be likely targets of the gun control lobby.

And if that's the way things play out, then gun stocks like Sturm, Ruger could be heating up again -- and perhaps sooner than you think.