It was no surprise to see Toyota do well in the latest study from J.D. Power. But there were some big surprises in the results, including the name of the company that joined Toyota at the top. Here's a hint: It's based in Detroit.

It was no surprise to see the original Toyota Prius v praised for high reliability in J.D. Power's latest study. But some of the other results were very surprising. Image source: Toyota.

Keeping in mind that the study looked at 2013-model-year vehicles, some of its results weren't very surprising. Toyota (TM -0.52%) near the top? Ho-hum. Fiat Chrysler's brands near the bottom? Sadly, that's no surprise either.

But a few of the other results in the latest edition of the VDS were big eye-openers. We asked three Foolish contributors to weigh in with the ones that caught their attention.

Rich Smith
Maybe I'm being naive, but the biggest surprise for me in J.D. Power's VDS report was Ford's (F -1.06%) shocking fall from grace -- all the way down to a second-to-last finish in the rankings. 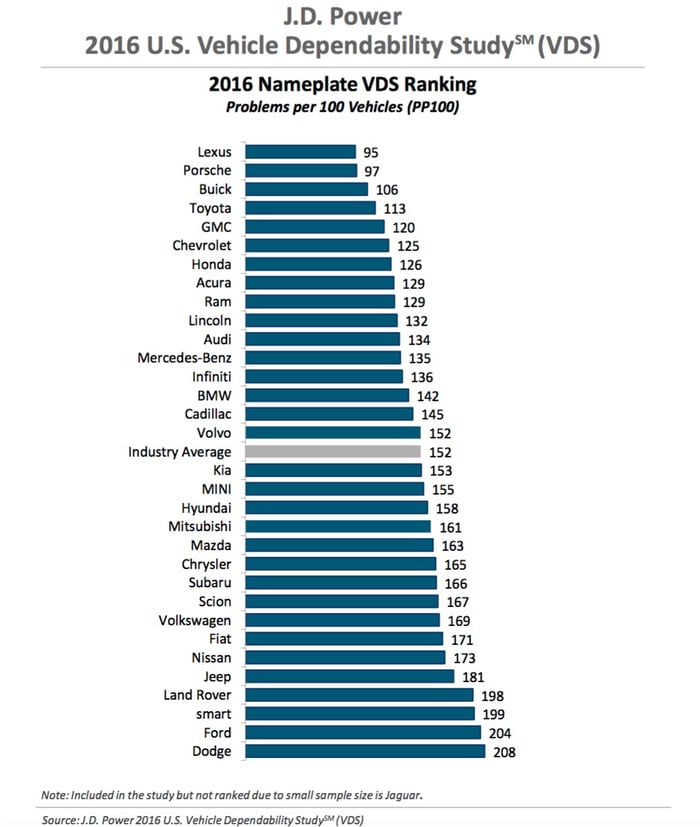 Just eight years ago, a Great Recession that swallowed up General Motors (GM 0.56%) in bankruptcy proceedings seemed to give Ford a huge lead over its U.S. rivals. GM took a government bailout, becoming, in effect, Government Motors. Ford, however, charted its own course, made payments on its debts, and continued investing in product development.

As recently as four years ago, that investment was still paying off for Ford, lifting the automaker above the "average" mark on J.D. Power's 2012 report, and racing ahead of such perpetual quality powerhouses as Honda and its Acura luxury brand.

Sure, Ford's rating has slipped in recent years, falling below "average" in 2013, and further and further below in subsequent years. But I never expected things to get so bad that Ford would actually be neck and neck with Dodge, in a race to the bottom of the rankings, or to achieve a worse ranking than Fiat or Smart!

My, how times have changed.

Daniel Miller
Ah, how quickly America's love affair with SUVs returned as soon as fuel economy became an important feature and selling factor. Land Rover, owned by Tata Motors (TTM -0.68%), is taking advantage of America's love affair with SUVs, especially with high-priced versions of those SUVs, and was one of the fastest-growing brands in the U.S. last year. Land Rover has posted four consecutive years of sales growth in the U.S. and sold more vehicles in 2015 than it has in any year going back to at least 2002.

However, the brand's performance in J.D. Power's U.S. VDS surprised me -- and not in a good way.

First, it was no surprise to see Lexus atop the list yet again. It also didn't surprise me to see Porsche right behind in the No. 2 spot. Nor did Lincoln's, Audi's, Mercedes-Benz's, BMW's, or Cadillac's spot above the industry average surprise me in the least. That's because these are luxury brands, and when you pay a premium for such a vehicle you expect a higher-quality product with fewer problems.

However, investors and consumers should keep in mind that small issues with technology or infotainment systems can send these scores plummeting, and it's unclear if the Land Rover brand scored so low due to issues like that or more serious engine and/or transmission issues.

John Rosevear
I agree with Rich that it was somewhat surprising to see Ford drop in the rankings. But to my eye, the real surprise, at least for those who don't follow the industry closely, was General Motors' outstanding performance.

Folks, GM arguably beat Toyota -- in a quality study. At worst, it was roughly a tie. This is serious. And it's not the first time that post-bankruptcy GM has pulled off an impressive showing in these studies.

Something very big and important has changed at General Motors. Look at the chart above. All four of GM's U.S. brands were above average. And GM vehicles won eight of the individual segment awards. Toyota only managed six.

The top-ranked small SUV in the latest Vehicle Dependability Study wasn't a Toyota or a Honda. It was GM's hot-selling Buick Encore. Image source: General Motors.

GM took a lot of flak for the 2009 bailout. But that trip through bankruptcy court and the big management changes that followed have led to some very good things for the General, things that it had arguably needed for decades. Today's GM has fewer (but busier) factories, a more streamlined global product portfolio, product-development goals and processes that have been completely rethought, and a management team that is focused on quality and return on investment rather than on meaningless market-share targets.

It's easy to talk a good game in the auto business, and some of GM's rivals do that very well. But under CEO Mary Barra, GM has adopted an approach of being careful about what it promises -- and then delivering on, or exceeding, its promises in dramatic fashion.

This is one of those things. It's not a fluke. GM's current crop of vehicles can compete head-on with any rival in the world, on any metric -- including with Toyota on quality.

Unfortunately for GM, it takes a long time to move past consumers' memories of the bad old days when GM's quality lagged its import-brand rivals. That has started to change -- GM's discounts are way down and its profit margins are way up -- but it'll take time to fully realize the benefits of the huge strides in quality that the company has made in the last few years.

For investors, that might be good news: There's still time to get in on this story.