Warren Buffett is legendary for his stock-picking acumen, and thanks to his recent annual report and filings with the SEC, investors now know what Buffett's top investing picks are this year. Given that following in Buffett's footsteps could prove profit-friendly, here are three companies that he owns that you might want to consider picking up for your portfolio too.

Todd Campbell: If you're a buy-low kind of investor like Buffett, then you might want to consider adding some Deere & Company (NYSE: DE) to your portfolio.

Because net farm income fell more than 30% last year and its projected to drop by another 3% this year, Deere & Co.'s sales fell 15% year over year in its fiscal first quarter.

Farm income is expected to be the lowest in 14 years, and while that's not a recipe for rebounding equipment sales, it could indicate an industry that's getting close to a cyclical bottom. If so, then a firming up in farm prices -- either because of better-than-expected global growth or a weakening of the U.S. dollar supporting export volume -- could propel Deere & Co.'s share price higher.

Of course, farm prices could stay low and new machinery demand may not materialize for a while, but Buffett's 22.9 million-share stake suggests he thinks the odds are in his favor for a rebound at some point down the line. Investors, however, may need to be patient for this one to pan out.

John Rosevear: Most of the major automakers have slumped in a big way over the last few months. Institutional investors have been worried that growth in the new-car markets in the U.S. and China seems to be slowing -- and concluding, perhaps rightly, that profit growth at the major automakers might be scarce for a while.

But for long-term-minded investors (that's us Fools), a big sector sell-off can create an opportunity to stash away the best stocks in the group. And I like Berkshire's pick of the bunch quite a bit.

As of the end of 2015, Berkshire held exactly 50 million shares of General Motors (NYSE: GM), or about 3.25% of the giant automaker. That's enough to make Buffett and company the General's fourth largest shareholder. And compared to where it was trading a few months ago, GM's stock is looking like a pretty solid value. 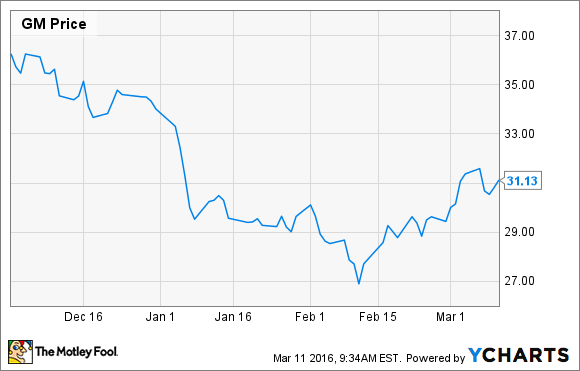 Right now, GM is trading at a little more than five times its 2015 earnings. Granted, if we're really at the peak of auto sales around the world, GM's profits might dip a bit over the next couple of years.

But here's the thing: GM CEO Mary Barra has the General on track for a big bottom-line boost by early next decade. Her plan has several parts, but the goal is to get GM's adjusted pre-tax margins consistently into the 9% to 10% range. (It was 7.1% in 2015.)

After meeting GM CEO Mary Barra, Buffett and his team bought 50 million shares of GM -- and Buffett bought himself a new Cadillac.

The plan has several key components (you can read more about it here), but the big takeaway is this: It's credible, it's backed by a long-term commitment from GM's board and management team, it anticipates Silicon-Valley-style disruption of the global auto business (and aims to put GM in a leadership position for the long-term), and it's already working.

Long story short: If you want to buy a good company for long-term growth at a good price, General Motors sure looks like one. You might have to wait a while before the big changes are fully realized -- but with a dividend yield that's right around 4.8% at current prices, you'll get paid pretty well for your patience.

Sean Williams: One of the more attractive companies in Buffett's portfolio is one he recently pulled the trigger on – midstream giant Kinder Morgan (NYSE: KMI).

Kinder Morgan has been pummeled recently by weakness in the natural gas market (Kinder Morgan gather, stores, transports, and refines natural gas and liquid natural gas), as well as oil price weakness. The fear being that if low prices are here to stay, then oil and gas drillers may start to go under and production could be reduced. A company like Kinder that relies on transportation, storage, and refining contracts certainly wouldn't want to see a substantial reduction on fossil fuel recoveries. Adding icing on the cake, Kinder Morgan also slashed its dividend by 74% in December to preserve cash while it continues to grow and deal with its highly levered balance sheet.

But most investor worries seem a bit overblown. For instance, the vast majority of contracts Kinder Morgan is working with are long-term in nature. This means we're talking about predictable production levels and cash flow, which is important when working with $43 billion in debt. Over the trailing 12 months alone operating cash flow totaled $5.3 billion thanks to its long-term deals.

Another intriguing long-term aspect of Kinder Morgan is that demand for natural gas is only expected to rise in the U.S. and around the globe. The 2015 Annual Energy Outlook from the U.S. Energy Information Administration projects at the midpoint that dry natural gas production will grow from 24.4 Tcf in 2013 to 35.5 Tcf by 2035, or 45%. Viewed as a cleaner burning fuel than coal, we've witnessed U.S. electric utilities making the switch from coal-fired plants to natural gas, both in lieu of the cost-savings as well as EPA regulations.

Buffett, being all about the big picture, likely views the recent decline in Kinder Morgan as an overreaction. If these estimates hold water, then natural gas is going to play a vital role in the U.S.'s future, with Kinder Morgan reaping handsome rewards. In the meantime, Kinder Morgan shareholders can sit back and collect a 2.7% dividend yield until presumed sensibility takes hold.