U.S. missiles are headed for the Gulf, but who will build the boats to float them?

Don't look now, but that market just got a little bit bigger.

The news
Last week, the U.S. Defense Security Cooperation Agency -- the Pentagon arm responsible for coordinating arms sales between U.S. defense contractors and our allies -- notified Congress of an upcoming sale of RIM-116C rolling airframe missiles to the military of Qatar. Lightweight, supersonic, and guided by radar, the RIM-116 is a ship-defense anti-missile missile designed specifically to shoot down hostile anti-ship missiles. (It's called "rolling," by the way, because it spins in the air as a means of self-stabilization, helping the missile to fly straight.)

According to DSCA, Qatar is buying 254 of the missiles from Raytheon (RTN) in order to "protect its naval forces and nearby oil/gas infrastructure from air and missile threats." Raytheon, the principal contractor on the deal, stands to make $260 million from the sale of the weapons, plus "associated equipment, training, and support" services.

At the 13.2% profit margin that Raytheon's Missile Systems division earns on its missile sales (according to data from S&P Global Market Intelligence), this implies a total profit of about $34.3 million for Raytheon, or roughly $0.12 per share. That's a significant sum -- but there could be even more money to come.

"Under-trained, under-staffed, and under-equipped"
Here's why: According to Raytheon, the RAM-116C is designed for use on a wide variety of warships, ranging from "95,000 ton aircraft carriers" all the way down to "500-ton fast attack craft." Currently, though, the biggest vessel we know of in the Qatari Navy doesn't meet even this lower threshold for size.

Rather, Qatar's navy and coast guard is equipped with a hodgepodge of about six dozen small coastal patrol craft -- a force GlobalSecurity.org describes as "under-trained, under-staffed, and under-equipped given the massive scale of their on-shore and off-shore energy infrastructure."

Buying a batch of high-tech missiles from Raytheon is certainly one step toward rectifying that situation. It does, however, raise the question of where Qatar intends to put the missiles.

Corvettes for Qatar?
According to a 2013 report by the Center for International Maritime Security, Qatar has been "actively seeking corvettes" to add to its Navy. Indeed, as recently as last year, DefenseNews.org noted that negotiations are progressing with shipbuilders such as locally owned Etihad Ship Building, a joint venture with Italian shipbuilder Fincantieri, believed to involve the upgrade or even the purchase of new ships for Qatar's navy.

Weighing in at roughly 2,000-plus tons displacement, a corvette is a modern warship of a size easily capable of supporting Raytheon's RAM-116C. More important to the defense contracting industry, it's a vessel that can easily cost $125 million or more -- each. And Qatar's order for hundreds of RAM-116C missiles suggests the country would need to buy multiple corvettes to field them.

Is such a sale in the offing, and if so, from whom? We don't know yet, but the size of Qatar's arms purchase is certainly suggestive. Here are a few likely suspects drawn from the U.S. small warship-building industry to consider -- just on the off chance Fincantieri doesn't win the contract.

And as soon as we know more, you'll know more. 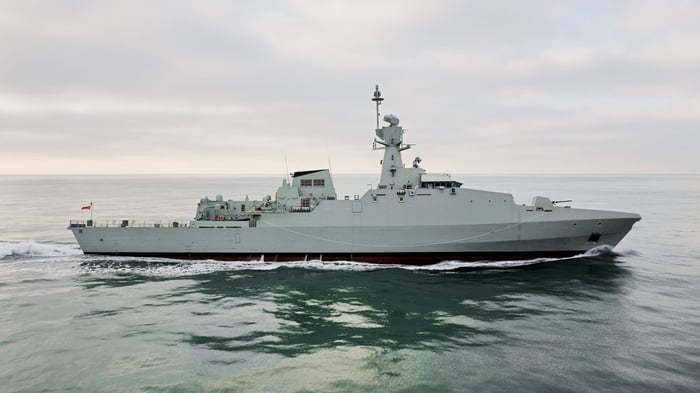