Please ensure Javascript is enabled for purposes of website accessibility
Log In Help Join The Motley Fool
Free Article Join Over 1 Million Premium Members And Get More In-Depth Stock Guidance and Research
By Jason Hall - May 14, 2016 at 10:41AM

The natural gas engine technology company needs something to start generating profits in the very near future.

Natural gas engine-technology leader Westport Innovations (WPRT -1.94%) announced financial results for its first quarter on May 12, and the bottom line isn't getting any better. The company continues to face declining sales, and while expenses are falling, it continues to burn through capital at a much-faster rate than it's producing.

Factor in concerns that its pending merger with Fuel Systems Solutions(NASDAQ: FSYS)-- which has a much-stronger balance sheet and much-better operating cash flows -- may fall through, and there's much to be uncertain about.

For years, the lure of Westport's technology has failed to deliver any sustainable business results. And while it's easy to say that timing has played a big part -- after all, the ongoing oil crash caught almost everyone off guard, and significantly altered the demand landscape for natural-gas vehicles -- at some point, the music will stop for a company that's unable to produce enough cash flow to cover its expenses.

In short, Westport's net loss was nearly equal to its total revenue. While that doesn't tell the whole story -- Westport doesn't recognize revenue from its joint ventures, which generated $95 million in sales in the first quarter -- those joint ventures only produced $5.4 million in operating income. Further, Westport will only receive $2 million of that total.

With the exception of general/administrative and interest expense, Westport spent less in every one of these categories last quarter. But at the same time, the company spent $42.7 million on these categories, while only generating $26 million in revenues and income from its joint ventures. That's $16.7 million headed the wrong way.

Fuel Systems Solutions, on the other hand, has been generally cash-flow positive in recent years: 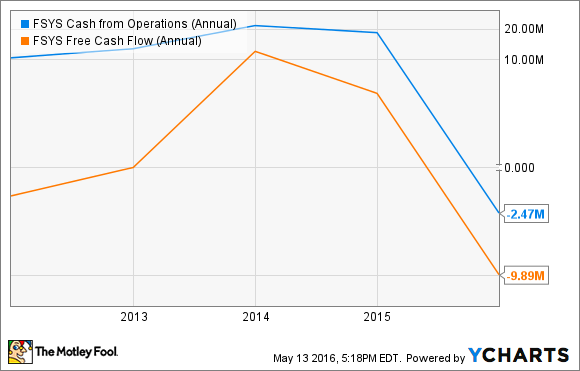 Yes, it was cash flow negative in the first quarter, but it typically is in the first quarter. This occurs because it spends cash to build up inventory early in the year that it will sell as the year progresses, producing positive cash for the full year. Furthermore, Fuel Systems also has $49 million in cash on the balance sheet, and no long-term debt.

At the same time, Westport isn't the only partner to this arranged marriage that would benefit. Westport President and COO Nancy Gougarty said on the recent earnings call that the combined business would realize $18 million in annual cost savings. Furthermore, Fuel Systems doesn't participate in heavy-duty transportation, focusing instead on light-duty vehicles, infrastructure such as refueling systems, and industrial technology, such as forklift engines.

In the short term, Westport would certainly get a huge lift from Fuel Systems' stronger operating business and the capital that it would bring to the combined venture. In the long term, however, prospects for Fuel Systems and its shareholders would be enhanced with a much-larger addressable market.

The enticing potential of Westport's technology -- particularly high-pressure, direct-injection, or HPDI -- to unlock the massive (and potentially massively profitable) heavy-duty trucking industry, has been a siren's call, destroying many an investor's capital ship on the stony shore of "Just keep waiting" island. HPDI has been the key technology that Westport has touted for many, many years, but has yet to bring to market in any meaningful way.

The company produced an in-house 15-liter version of the engine several years back, but relatively low sales -- largely because of the high cost of each of these essentially hand-built engines -- led the company to discontinue it, and make the shift to HPDI 2.0.

HPDI 2.0, however, might actually be different. I know... I can hear you now: "This time it's different... right?" Yes, it's true that "This Time it's different" and "Just keep waiting" are merely two islands in an archipelago of destroyed investor returns.

But seriously, here's why HPDI 2.0 could actually work out:

First, HPDI 2.0 won't be manufactured by Westport. The company is partnering with Delphi Automotive (DLPH), one of the largest global manufacturers of engine injectors in the world. Delphi and Westport are currently installing production lines inside Delphi facilities, and are on track to start production this year. This move will mean three major things:

Lower cost and easier OEM integration are key, because that will drive more buyer demand, while also reducing the cost and complexity for OEMs to work HPDI 2.0 into their assembly lines. But here's the real bottom line: Delphi isn't in this to just take up space on its manufacturing floors, and it has strong credibility with vehicle and engine OEMs. This is a real positive for HPDI 2.0, and a solid reason why it should progress toward commercialization in 2016.

The reality is, if the Fuel Systems deal falls through -- and a co-founder with a nearly 9% stake in the company says he will vote against it -- Westport's financial situation will be much, much more uncertain, and there will be real concerns whether the company will have enough capital to bridge the gap between now and HPDI 2.0 generating meaningful revenue. Bottom line: the Fuel Systems merger is good for both companies, but Westport needs Fuel Systems more than Fuel Systems needs Westport.

Assuming the deal closes, there's a lot to be optimistic about. Failing that, Westport shareholders should be at least a little bit worried.