Going green has taken on a new meaning in the United States. Less than two decades ago, marijuana was illegal in all 50 U.S. states. Thirty-three U.S. states now have broad legislation in place that allows the use of marijuana in some form.

Think of the states as dominoes lined up one by one. When the first domino topples, it leads to a chain reaction that causes most, if not all, of the others to fall. That's what has happened and continues to happen with state legalization of marijuana. The timeline for marijuana legalization in the U.S. shows how those dominoes keep falling. 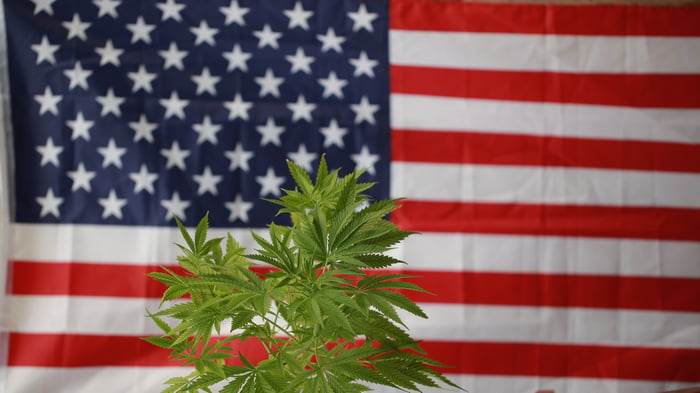 Let's first differentiate two actions states have taken with respect to marijuana. Decriminalization refers to the relaxation of criminal penalties associated with personal marijuana use. Oregon was the first state to decriminalize marijuana in 1973. The state imposed just a $100 fine for possession of up to an ounce.

Over the next 15 years following Oregon's legal change, at least a dozen other states decriminalized marijuana. But decriminalization merely lowered or removed the sting from antimarijuana laws. Manufacturing and selling marijuana remained illegal.

All but four U.S. states have some form of medical marijuana law. However, 13 states only allow the legal use of cannabidiol (CBD) or medical cannabis that has a low tetrahydrocannabinol (THC) content. CBD is a chemical ingredient of the cannabis plant that isn't psychoactive, while THC is the primary psychoactive ingredient in cannabis. These 13 states usually aren't included in the number of states that have legalized medical marijuana, because their laws place strict limitations on the form and manner of medical marijuana use. Thirty-three states, however, allow patients broad access to marijuana for medical purposes.

Eleven states plus the District of Columbia have cannabis laws in place that allow the legal use of marijuana for both medical and recreational purposes. No prescription is required for individuals to use marijuana in these jurisdictions. Some of the laws regulating marijuana are quite unusual, however. For example, the District of Columbia allows the legal use of recreational marijuana but technically still bans the buying and selling of the drug.

While the decriminalization of marijuana in the U.S. began in 1973, it wasn't until 1996 that the march toward legalization began. Here are the key milestones for U.S. marijuana legalization.

There has been quite a lot of activity in recent years to promote the legal use of marijuana for either medical or recreational purposes. Five of these laws especially stand out because of their significant impact.

As you might expect, the legalization of marijuana has attracted both vocal supporters and opponents. Several groups have formed on both sides of the question. Here are some of the most influential of these groups.

National Organization for the Reform of Marijuana Laws. Founded in 1970, NORML is probably the most influential marijuana advocacy group. The organization championed early marijuana decriminalization efforts and remains active in working to legalize both medical and recreational marijuana across the nation. NORML's advisory board includes quite a few celebrities, including comedian Bill Maher, actor Woody Harrelson, actor Tommy Chong, and singer Willie Nelson.

Marijuana Policy Project. Founded in 1995, MPP lobbies the U.S. Congress and state legislatures with a special focus on decriminalizing marijuana and changing laws to make medical marijuana available to patients. The organization was active publicly and behind the scenes on many of the marijuana legalization milestones mentioned earlier.

Drug Policy Alliance. DPA's roots date to 1987, when American University professor Arnold Trebach and attorney Kevin Zeese, who had previously worked with NORML, founded the Drug Policy Foundation (DPF). In 2000, DPF merged with The Lindesmith Center, another organization focused on changing U.S. drug policy and adopted its current name. The organization has been front and center in several victories, including the legalization of recreational marijuana in California and Colorado.

Smart Approaches to Marijuana (SAM). On the other side of the fence are several prominent organizations opposing marijuana legalization. Former Obama administration drug policy advisor Kevin Sabet and former Rep. Patrick Kennedy (D-R.I.) started SAM, one of the top antimarijuana groups, in 2013. SAM's primary focus is to prevent a "big marijuana" equivalent to the "big tobacco" group of large tobacco makers that exert significant influence nationally.

Others. Some companies have also fought against marijuana legalization. Insys Therapeutics (NASDAQ:INSY) donated $500,000 in 2016 to help defeat a ballot initiative to legalize recreational marijuana in Arizona. Not so coincidentally, Insys markets a cannabinoid drug, Syndros, which launched in 2017 for treating anorexia in people with AIDS and for treating chemotherapy-induced nausea and vomiting.

Nevertheless, 33 states have elected to legalize marijuana despite federal laws to the contrary. Why haven't the other states moved forward with legalization? The biggest reason is probably concern about the potential for abuse of marijuana and the societal problems to which this abuse might contribute.

It didn't help that a 2017 report from the National Academies of Science, Engineering, and Medicine stated that "conclusive evidence regarding the short- and long-term health effects -- both harms and benefits -- of cannabis use remains elusive." Marijuana opponents use this report to question the wisdom of legalizing a product for which uncertainties regarding safety exist.

These concerns are a major factor holding back states from legalizing recreational marijuana. Many Americans continue to oppose any use of narcotic drugs for recreational purposes. Even among those who do support legalization of marijuana, it's often not a top priority. These factors make it easy for some politicians to oppose legalization or simply ignore the topic.

The future of U.S. marijuana legalization

It seems likely that more states will legalize marijuana. Several states could vote on legalizing either medical or recreational marijuana in 2020. It's also possible that some of the states that have highly restrictive medical marijuana laws could relax those laws to allow broader access.

One big factor driving this trend is that states need additional revenue. Just as most states legalized lotteries to generate revenue, many states could consider legalizing marijuana as a way to boost their revenue without making unpopular moves such as raising income or sales taxes.

Could U.S. federal laws be changed to ease restrictions against the use and sale of marijuana? It's not out of the question. Public support among Americans for legalizing marijuana is at an all-time high, and Americans support the rights of states to make and enforce their own marijuana laws.

However, a majority of older U.S. citizens, who traditionally vote in high numbers, still oppose legalization. Most Americans indicate that they would vote for a candidate with whom they disagreed on marijuana policy. Senators and representatives who want to play it safe could remain opposed to federal legalization of marijuana.

Marijuana is already a large industry, with U.S. sales in 2019 estimated to be more than $12 billion. By 2022, U.S. marijuana sales could top $22 billion. Marijuana investors won't find too many industries that could nearly double in three years.

A big challenge, though, is that there are few really good marijuana investing alternatives among U.S. stocks. Most of the ones available are relatively small and trade over the counter rather than on major stock exchanges. They also tend to sport astronomical valuations.

There are exceptions, though. Innovative Industrial Properties (NYSE:IIPR) provides real estate capital to medical cannabis operators, buying properties and leasing them to customers. Scotts Miracle-Gro (NYSE:SMG) is the go-to supplier of hydroponics products for marijuana growers. Both companies are profitable. Their valuations aren't outrageous. And both companies even pay dividends.

The fortunes of both Innovative Industrial Properties and Scotts Miracle-Gro, as well as other U.S. marijuana stocks, will be greatly affected by what happens with marijuana legalization in the United States. If more states legalize marijuana and/or the federal government relaxes its cannabis laws, these stocks could soar. But as long as the threat exists that the feds could crack down on the marijuana industry, buying these stocks will come with an added level of risk. Marijuana investors should proceed cautiously.