First, why would you want to calculate percentages of total revenues?
Let's imagine that you want to compare the profitability of wearable fitness device-maker Fitbit Inc and Apple:

On seeing those figures, you might conclude your analysis with the following observation: "Apple's operating profit exceeds that of Fitbit by a factor of 229 (= $71,230/ $310.7). I guess that settles the matter of who is more profitable."

How to calculate percentages of total revenues
Scaling each company's operating profits to its revenue allows us to make a better like-for-like comparison with regard to company profitability. In fact, when we think of profitability, one of the first notions that comes to mind is that of profit margin, which is nothing other than that dollar amount of profits expressed as a percentage of total revenue:

In this case, we obtain:

We now see that, even as a percentage of revenues, Apple is more profitable than Fitbit, and on the basis of operating profits, we could also compare the percentages for net profits. A simpler way to say this: Apple's operating profit margin is higher than Fitbit's (by half!).

If we want to dig down to try to understand how Apple achieved that higher margin, we might want to compare different categories of cost for the two companies, such as cost of goods sold, or selling, general, and administrative costs (SG&A).

If we look at absolute dollar amounts, we'll run into the same problem as we previously did: Apple's trailing 12-month cost of goods and services was $140.1 billion; Fitbit's was $793 million. Comparing those two figures doesn't tell us very much.

The following table, which is part of a valuation analysis that Hanover Foods Corporation filed with the SEC, shows that, in addition to facilitating comparisons between companies, the common size income statement is also useful for comparing a single company's performance over time: 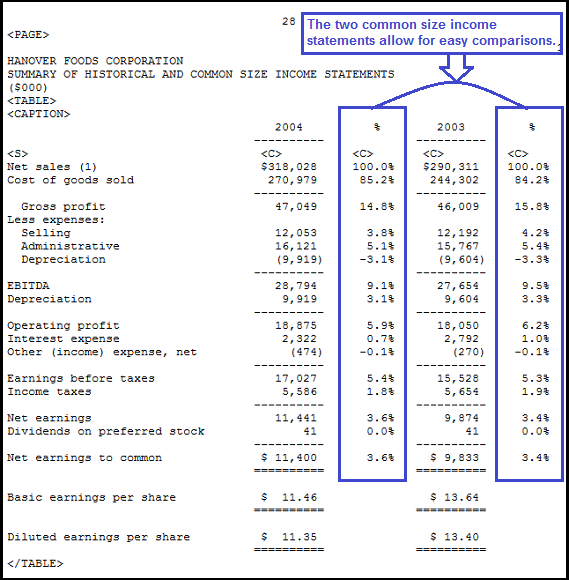 You can see that calculating percentages of total revenues is a powerful analytical technique in the fundamental analysis of companies. In practice, analysts rarely perform the calculations themselves, as any data provider worth its salt will provide those percentages. 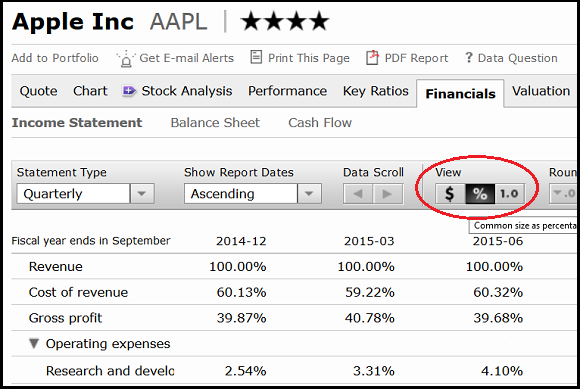 The Motley Fool owns shares of and recommends Apple. We Fools may not all hold the same opinions, but we all believe that considering a diverse range of insights makes us better investors. The Motley Fool has a disclosure policy.