In order to contribute to an individual retirement arrangement, or IRA, you generally need to have earned income. In other words, if you contribute $5,000 to an IRA in 2016, the rules state that your income for the year must be equal to or greater than that amount. However, there's a special rule that applies to spouses, that allows one spouse to contribute to an IRA for the other spouse, even if he or she does not work.

What is a spousal IRA?

Unlike many other types of financial accounts, there is no such thing as a joint IRA (the "I" stands for individual). And generally speaking, individuals need to have earned income in order to contribute to an IRA. 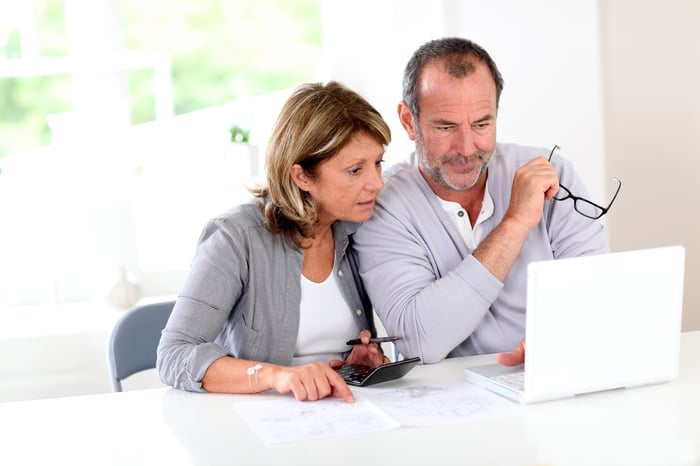 However, there is an exception for married couples that's designed for couples where only one spouse works. Basically, if a few basic requirements are met, which I'll discuss shortly, the working spouse can contribute to IRA in both spouses' names. Contributions made on behalf of the non-working spouse are known as "spousal IRA contributions."

How much can you contribute to a spousal IRA?

For the 2016 and 2017 tax years, the IRA contribution limit is $5,500 per year, with an additional $1,000 catch-up contribution allowed for savers age 50 or older. And as I mentioned, to contribute to an IRA, your earned income must be equal to or greater than your contribution amount. Earned income means wage income from a job, or self-employment income -- passive income sources like dividends on investments don't count.

The same rule applies for spousal IRAs, except the income-earning spouse must have enough income to justify both contributions. In other words, if a 55-year-old wants to contribute the maximum amount for themselves and their spouse, they need to have earned income of $13,000 or greater for the year.

In order to contribute to an IRA for your spouse, you must currently be married and must file a joint tax return. If you're contributing to a traditional IRA, your spouse must be under age 70 1/2. No age restriction applies for Roth IRA contributions.

Finally, notice that I mentioned both the 2016 and 2017 contribution limits, even though we're well into 2017 at the time I'm writing this. That's because the IRA contribution deadline hasn't passed -- you have until the regular tax deadline for each year to make your IRA contributions, including those intended for the benefit of a spouse. For 2017, this means that you could start an IRA for your spouse and fund it retroactively for the 2016 tax year, as long as you get your contributions in by April 18, 2017.

Why use a spousal IRA?

In a nutshell, a spousal IRA can allow you to effectively double your tax-advantaged retirement saving. Over a period of decades, this can make a big difference in your quality of life after retirement, not to mention your tax bills.

For example, let's say that you're married and earn $120,000 per year, and your spouse is a stay-at-home parent. After deductions and exemptions, you're in the 25% tax bracket. And for simplicity, let's also say that you don't have access to a 401(k) or other retirement plan at work.

If you start a traditional IRA and contribute $5,500 per year, after a period of 35 years, you could have a nest egg of over $700,000, assuming a historically conservative 7% rate of return on your investments. In addition, you'll save $1,375 on your taxes every year.

On the other hand, if you contribute $5,500 to traditional IRAs for you and your spouse each year for 35 years, your nest egg could be twice as large, or over $1.4 million. This would make a big difference in your potential quality of life after retirement. What's more, you'd have an additional $2,750 in your pocket every year come tax time.