Talk about some positive news.

Read the news, and you'll often hear that younger adults are delaying homeownership. This trend is due in part to a more limited number of starter homes on the market, and also the fact that college grads are coming away with more debt than ever before.

It's therefore encouraging to see that Gen Zers, America's youngest adults, haven't given up on homeownership. Quite the contrary -- 59% of prospective homebuyers between the ages of 18 and 23 want to purchase property within the next five years, according to Bank of America. And their chances of accomplishing that goal are pretty high, with more than 50% having already started saving for a down payment. 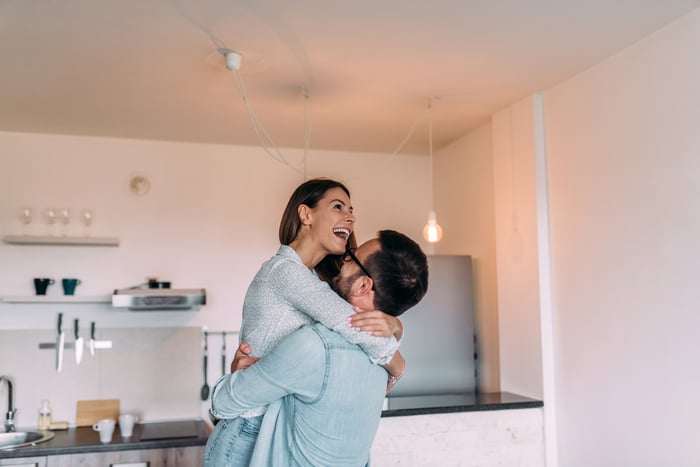 Not only are Gen Zers making sacrifices to sock away funds for homebuying purposes, but they clearly have their eyes set on the prize. When asked what they'd do with a $5,000 windfall, 80% of Gen Zers said they'd use it for a home down payment before even thinking about spending it on a dream wedding. Also, 71% of Gen Zers said they'd apply $5,000 to a home purchase rather than use it to go on vacation. Furthermore, nearly half of Gen Zers say they're willing to get a second job on top of their primary one if it helps them buy a home sooner.

If you're a younger adult who's hoping to become a homeowner in time for your 30th birthday, you should be proud that you've established such an impressive goal for yourself. That said, here are a few key things you need to know about taking that leap.

Be sure to come up with a 20% down payment

The younger you are when you buy a home, the less time you'll have to save. And that could lead you to buy a home without coming up with the 20% down payment lenders generally want to see.

Now you don't need 20% of your home's purchase price to make it your own, but if you put down less, you'll be hit with private mortgage insurance, or PMI. PMI is a premium that gets tacked on to your mortgage costs, thereby increasing your monthly payments and making them harder to keep up with. In other words, it's really not something you want if you can avoid it.

Putting down 20% on your home also allows you to build some instant equity. And that could come in very handy if you're hit with a home emergency and need access to money to pay for it, which leads to our next point.

Go in with emergency savings

Owning a home could mean facing a seemingly endless stream of maintenance and repairs. (Remember, even the small stuff costs money, especially if you're not particularly handy yourself.) That's why you need to build up some savings before becoming a homeowner. This way, you won't be forced to charge all of those expenses on a credit card and rack up loads of interest in the process. In fact, you should ideally have a fully loaded emergency fund with three to six months' worth of living expenses before you buy, especially since you never know whether you'll face a major repair early on.

It's inspiring to see that Gen Zers are willing to work hard and give up luxuries in the name of homeownership. If that's your goal, go about it smartly, which means amassing a respectable down payment and making sure you have cash in the bank to deal with the many hiccups homeowners inevitably face. And then get ready to celebrate the fact that you're on your way to hitting a milestone many people your age only dream about.