Please ensure Javascript is enabled for purposes of website accessibility
Log In Help Join The Motley Fool
Free Article Join Over 1 Million Premium Members And Get More In-Depth Stock Guidance and Research
By Maurie Backman – Aug 8, 2019 at 4:09AM

Many of us are guilty of it, too.

Often, we need to spend money in order to work, whether that means paying to commute, maintain a business wardrobe, or feed ourselves while we're stuck at our desks. But the latter is an expense you can largely minimize if you're willing to make the effort by preparing food at home to bring to work rather than ordering food in or getting take out.

Americans order three meals a week at work, on average, according to a new survey by health and fitness resource RowingReviews.com. And almost 24% of Americans say they order five or more meals in the course of the workweek. But either habit could be costing workers big time. 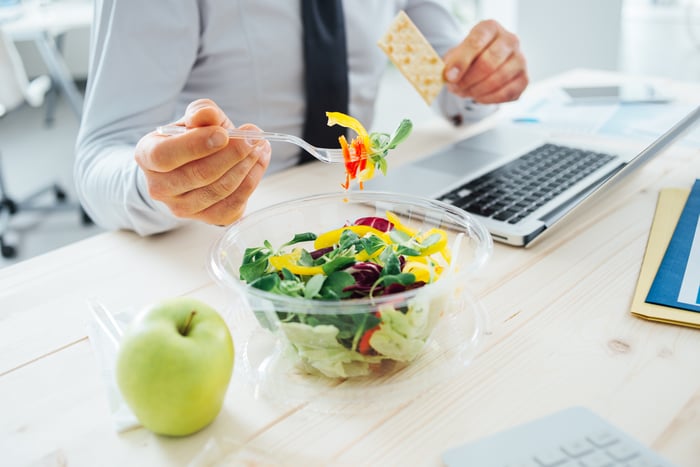 The average ordered meal costs $8.80, which is more than double the $4.20 it costs, on average, to prepare a meal at home and bring it to work. Over the course of a year in which someone works 50 weeks, a worker who orders five meals a week could end up spending an extra $1,150 on lunches alone. For someone who only orders three meals a week, that number drops to $690. But that's still a lot of cash to blow needlessly.

It's all about choices and priorities

If you're doing well financially, aren't big on meal prep, and enjoy the experience of ordering different foods, then there's nothing wrong with spending extra money to buy meals during the workweek. But whether your excess spending totals $690, $1,150, or somewhere in between, that's a lot of money to allocate to prepared food -- especially if you're low on savings.

And let's be clear: Many U.S. adults are low on savings. An estimated 60% of Americans don't have enough money in the bank to cover a $1,000 emergency. If that's the scenario you're facing, then spending anywhere in the ballpark of $690 to $1,150 to enjoy prepared meals is a decision you're apt to regret the next time an unplanned bill you can't pay lands in your lap.

Of course, this isn't to say that you can't ever order in food if your savings need work. When you plug away at a job for 40 hours or more per week, sometimes you need a little reprieve, which could come in the form of not having to wake up 15 minutes early to make your own salad or sandwich. That said, if your savings are in bad shape, and you're currently in the habit of ordering three meals or more per week, try cutting back. Eliminating one purchased meal a week could save you $230 over a 50-week timeframe. Is that enough to build an emergency fund from scratch? Certainly not. But it will get you closer to that goal.

Finally, if you really love buying food, and ordering in meals is what gets you through the workweek, then don't cut back -- but cut another expense instead to free up cash for savings. You might choose to downsize your apartment if moving isn't too much of a hassle. Or, you might make smaller changes, like canceling your gym membership, getting rid of a few rarely used subscriptions or streaming services, or getting around town by foot more often rather than paying for rideshares. There are plenty of cost-saving options to play around with, so if you're loathe to give up your food-ordering habit, make other changes to compensate for the fact that you're spending cash you should really be saving.