Please ensure Javascript is enabled for purposes of website accessibility
Log In Help Join The Motley Fool
Free Article Join Over 1 Million Premium Members And Get More In-Depth Stock Guidance and Research
By Maurie Backman - May 16, 2021 at 8:04AM

Be careful -- these moves could leave you with a world of regret.

You'll probably rely somewhat heavily on Social Security to pay your bills as a senior -- especially if you don't manage to amass a substantial nest egg. That's why it's important to manage your benefits carefully. But if you make any of these moves, you could wind up kicking yourself for years.

You're eligible to receive your full monthly Social Security benefit based on your personal earnings history once you reach full retirement age (FRA), which kicks in at either 66, 67, or somewhere in between, depending on the year you were born. But you're allowed to sign up for benefits as early as age 62. Doing so will give you your money sooner -- and perhaps allow you to retire early, travel, or meet other goals. But filing for benefits before FRA will also shrink them in the process, and that could prove problematic later in life. 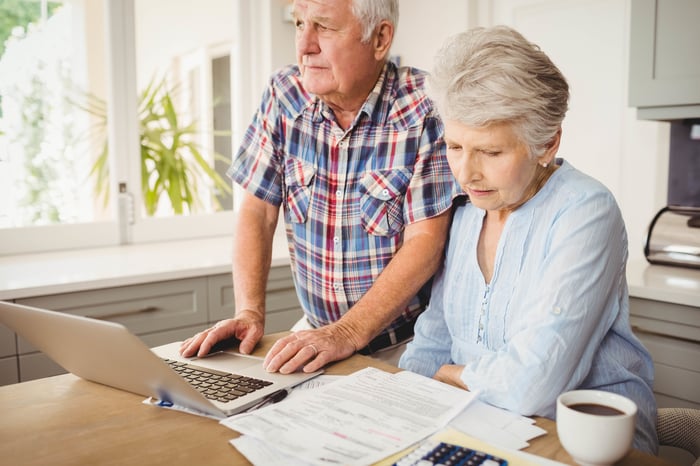 Say you decide to claim Social Security at 62 with an FRA of 67. At that point, you'll be sentencing yourself to a 30% lower monthly benefit for life. If you end up depleting your retirement savings in your early 80s and you live until your early 90s, you may have to struggle through a decade where your only income source is a benefit you've already slashed.

Just as you can sign up for Social Security before FRA, you can also delay your filing beyond that point and boost your benefits by 8% a year in the process, up until age 70. Going this route will leave you with a higher monthly benefit for life. But if you don't end up living a very long life, you may lose out financially.

Generally speaking, delaying benefits only makes sense when you expect to live at least an average lifespan or longer. Now you clearly can't predict your own mortality, but if you enter retirement in your late 60s in very poor health, then delaying benefits is probably not the way you want to go.

3. Encouraging your spouse to file early

If your spouse is the primary earner in your household, you may have reasons for wanting him or her to claim Social Security on the early side -- for example, so that you can both retire together and use that money to achieve joint goals while you're still fairly young. But if your spouse winds up passing away long before you do, and you don't have much income outside of Social Security to fall back on, then you may become heavily dependent on spousal benefits, which you'd be entitled to in this situation.

Your spousal benefit will be the same benefit your spouse collected while he or she was alive, so the higher that benefit is, the more robust an income stream your spouse will leave behind for. If your spouse's benefits take a hit because he or she signs up early, you could be stuck struggling financially for a long time.

When it comes to claiming Social Security, there's no such thing as a good age or a bad age to sign up. Ultimately, it's a personal decision, and one you should put a lot of thought into so you don't wind up kicking yourself for many years to come.