Social Security provides a valuable financial safety net to 60 million Americans. But payments to recipients are outstripping revenue collected from payroll taxes, and that means changes to the program are coming. The three changes below are among those on the table -- and while they may not be desirable, they may also be necessary to make sure Social Security is around when workers retire.

Social Security is a pay-as-you-go system. Revenue collected in the form of a 12.4% payroll tax, split between employees and employers, is used to make payments to current Social Security recipients. Because the impact of retiring baby boomers will further strain the program, many think an increase in tax revenue is needed. However, that doesn't necessarily mean that the payroll tax rate will go up.

Presidential hopefuls Hillary Clinton and Bernie Sanders, for example, have proposed raising the limit on income that is subject to the payroll tax. Currently, the payroll tax is only collected on income up to $118,500.

Social Security calculates your monthly benefit based on your 35 years of highest earned income and then uses actuarial tables to determine how much you'll receive in monthly benefits depending on when you claim. Since Social Security spending already outpaces tax revenue, and the Congressional Budget Office estimates benefits will need to be cut by 29% in 2030 absent any changes, some believe the full retirement age should be increased from 67 in order to 70 to reduce the program's annual spending. 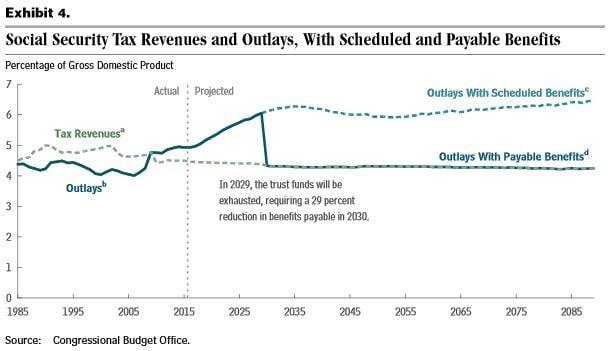 Shifting the full retirement age higher may make some sense, given that when Social Security was designed, Americans' average lifespan was far lower than it is today. Nonetheless, any change to the full retirement age would likely be made slowly so that people near retirement aren't affected. This idea won't win many fans among people in their 30s, who will understandably recoil at the idea of working longer than they had hoped.

The Social Security Administration adjusts the amount of income you receive depending on inflation. Currently, the SSA uses the Consumer Price Index to determine inflation rates and increases.

However, that could change in the future. Some lawmakers advocate basing benefit increases on another measure called chained CPI. Chained CPI is CPI adjusted to account for the fact that consumers tend to shift their purchases away from goods and services with high inflation rates to those with lower inflation rates.

Historically, chained CPI has increased more slowly than CPI, and therefore its use could save Social Security a lot of money. An analysis by the Congressional Budget Office in 2014 found that making this change would lower the average benefit paid to recipients in 2023 by $30. Considering that over 43 million Americans currently receive Social Security retirement benefits -- and that figure is climbing rapidly -- the savings could be considerable.

Benefits will have to be cut if changes aren't made to shore up Social Security's finances. That's hard to imagine, given that among retirees, 53% of married couples and 74% of singles rely on the program for at least half of their income. In order to protect millions of retirees from falling into poverty, changes like these may be unavoidable.