Which of these tax-advantaged retirement accounts is the right one?

A 401(k) and an individual retirement account (IRA) are both tax-advantaged retirement accounts. While 401(k)s are typically only offered by employers (who often match employee contributions), IRAs can be opened by individuals through any retail brokerage firm. 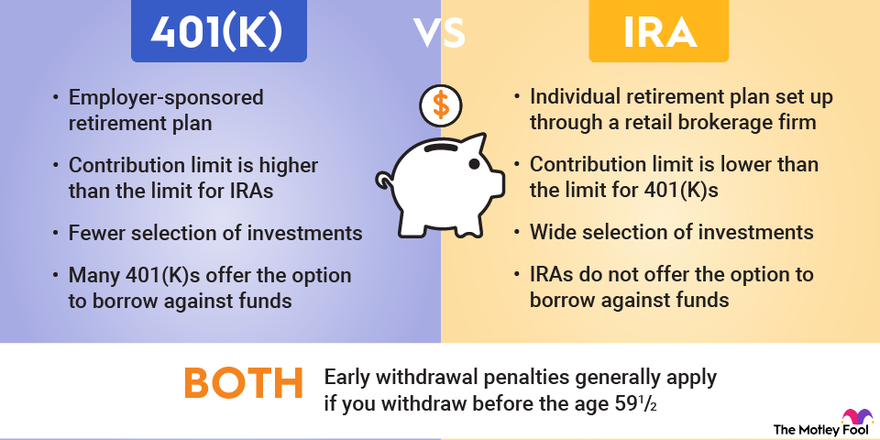 401(k)s generally allow higher contributions but offer fewer investment options, whereas IRAs have lower contribution limits -- and income caps for high earners -- but offer the opportunity to invest in almost any stock, bond, or mutual fund.

If you're debating between investing in a 401(k) or an IRA, the first thing to know is that you don't have to choose. You can invest in both.

Let's take a closer look at some of the rules governing IRAs and 401(k)s.

Eligibility to make tax-deductible contributions to a traditional IRA phases out for high earners if either the high earner or their spouse has access to a workplace retirement plan. High earners also cannot make Roth IRA contributions unless they use a backdoor Roth IRA strategy.

Unfortunately, when you leave your job you are no longer allowed to contribute to the 401(k) sponsored by your former employer. Instead, you must make a choice among keeping your 401(k) account as is with that company, rolling it over to an IRA, or rolling it over to your new employer's 401(k) plan.

Since both 401(k) and IRA plans are intended to help you save for your later years, there are penalties assessed for withdrawing money early. In general, if you withdraw funds from either a 401(k) or an IRA before the age of 59 1/2, a 10% early withdrawal penalty applies. However, there are some important differences in the rules governing IRA and 401(k) withdrawals.

First and foremost, it's possible to withdraw money in the form of a loan from a 401(k) but not from an IRA. Borrowing against your retirement account has significant downsides, but it does enable you to tap these funds without incurring the early withdrawal penalty.

On the other hand, with an IRA there are more scenarios in which you may withdraw money early without incurring the 10% penalty. The table below shows when you can withdraw money penalty-free from each type of account:

If you think you may leave your job in your mid-50s, then a 401(k) offers more flexibility due to the Rule of 55. But if you want your retirement account to cover education expenses, insurance premiums if you lose your job, or part of a home purchase, only an IRA provides those options penalty-free.

Got 401(k)s from old jobs? Here's why you should collect them in an IRA.

So can you have both? Yes, with some limitations.

As many as 95% of workers pay 401(k) fees, according to a survey conducted by TD Ameritrade and Pontera (formerly FeeX). The average fee is 0.45%; however, fees can vary substantially by the type of investment account.

Because 401(k) plans offer limited investment options, you may be restricted to only buying shares in mutual funds, which often charge higher fees than other types of securities accessible with IRAs.

By contrast, investments in IRAs typically come with few or no fees. Most brokers don't charge a fee to open an IRA account and have eliminated commissions on trades. You can compare IRA providers to identify those that don't impose fees. Plus, with a broader choice of investment types, you may also save money in fees by choosing low-fee exchanged-traded funds (ETFs) for your IRA's portfolio.

Most 401(k) plans offer the choice of investing in just 20 or fewer mutual funds, according to BrightScope. A minority of 401(k) plans can now be established as self-directed accounts -- meaning you can invest in many different types of securities, the same as you could with a typical brokerage account -- but self-directed 401(k)s are not the norm.

An IRA is more like a typical retail brokerage account in that your investment options are not restricted. If unrestricted investment choice is important to you, then an IRA is your best alternative. However, some investors appreciate the simplicity of having only a few investment funds from which to choose, in which case a 401(k) may be preferable.

Ultimately, as you compare all of the differences between IRAs and 401(k)s, you may decide that you prefer one over the other, or you may opt for both. Either way, the important thing is that you're saving now for your later years and building a diversified portfolio of sound investments that will provide for you in retirement.