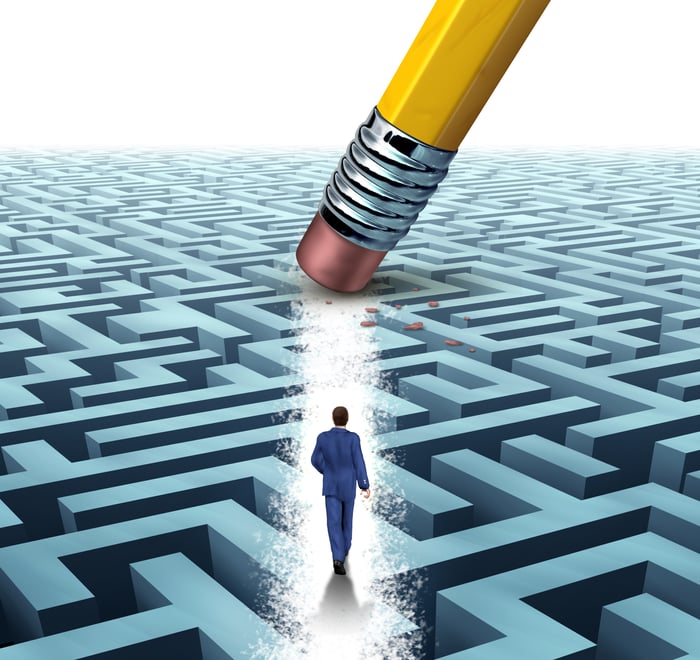 The only ETF you need to own for the next decade

Capital markets professionals (and financial journalists) tend to be myopic and ahistorical, so it's nice to see an investment bank publish research based on data that goes back decades, rather than weeks or months.

In a note published this week, Bank of America Merrill Lynch put together a very interesting graph covering nine decades of data that highlights the long-term outperformance of "value" relative to "growth": Image source: B of A Merrill Lynch.

The graph represents the relative performance of U.S. value stocks over growth stocks since 1926 -- during periods in which it is rising (falling), value is beating (trailing) growth (the red circle represents the period since the start of the Great Recession in December 2007). As B of A Merrill Lynch (BAML) chief investment strategist Michael Hartnett wrote, "[s]ince 1926 the average annual price return of Value stocks is 17% versus 12.8% for Growth stocks," adding that "value has outperformed Growth in roughly 3 out of every 5 years over this period."

Value's 4.2 percentage point annual outperformance, earned over nine decades, is a huge premium and not the product of chance.

[Note: Having looked at the underlying data, I'm fairly confident that the returns Hartnett cites are average total returns, not price returns.]

In case you're wondering how BAML defined "growth" and "value" stocks, they used data from professors Eugene Fama and Kenneth French, who use the price-to-book value multiple as their criterion: Value (growth) stocks are those with low (high) price-to-value multiples. Incidentally, the Fama-French data is publicly available here.

A closer look at BAML's graph and, specifically, the recent past reveals another interesting phenomenon (I've added some trend lines to illustrate my point): 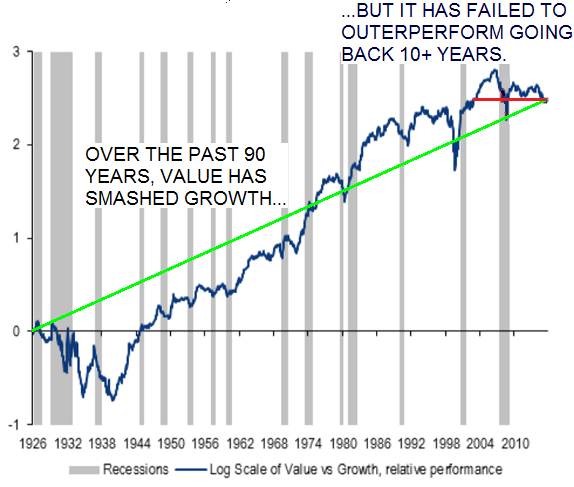 Image source: B of A Merrill Lynch, additions by author.

As the red trend line shows, value has roughly "flat-lined" relative to growth since the end of the 2001 recession; i.e., contrary to its long-term record, value produced no outperformance relative to growth over the past 10-plus years.

As the following graph shows, that could be a valuable insight. Indeed, if we expect the long-term trend of outperformance to continue (which I do -- but it's not guaranteed), then a long period with zero outperformance is likely to be followed by a period in which value doesn't just outperform growth, but does so by a wide margin. That is exactly what happened following the previous extended period with no outperformance: 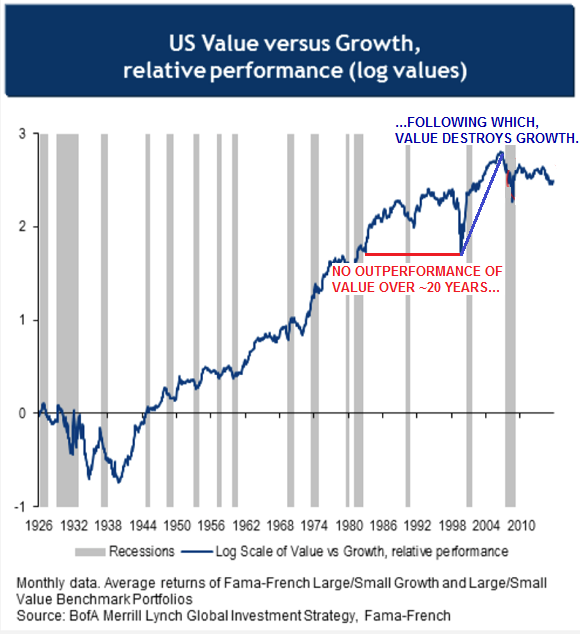 Image source: B of A Merrill Lynch, additions by author.

Beginning during the 1981-1982 recession, value produced no outperformance over growth over a period of roughly two decades (red trend line). This was then followed by a period during which value left growth in the dust (blue trend line), with a margin of outperformance that was substantially above the long-term historical average. That's a textbook example of reversion to the mean, but back to practical matters in the present: How do we turn this insight into the opportunity to earn superior returns?

Because value has produced zero outperformance over growth over a period nearly 12 years long (September 2004 through this past April), mean-reversion investors ought to own (or overweight) value stocks now in the expectation that this trend will reverse over the coming years. The best vehicle to do this is the one that is the best combination of low cost and a good match with Fama and French's benchmark.

After some (cursory) research, the best such vehicle I can find is the Vanguard Value ETF (NYSEMKT:VTV), which tracks the performance of the CRSP U.S. Large Cap Value Index at the very reasonable expense ratio of 0.08%. Note that Fama and French also use data from CRSP (the University of Chicago Booth School of Business's Center for Research in Security Prices) in constructing their benchmarks (however, they used the price-to-book value multiple as the sole metric for defining growth and value stocks, whereas the CRSP classifies value stocks using four additional criteria on top of price-to-book).

Broad market returns look likely to disappoint over the next several years: Betting on value is a fairly straightforward way to try to eke out incremental gains.

Quote of the day: Lambs to the slaughter

We have depended excessively on the reputation and good faith of Goldman. We should not depend on this. We need to review how much Goldman is likely to make from this investment ... Goldman have not been honest in their practices and disclosure. -- External financial consultant Ali Baruni, in an email to Libyan Investment Authority executives

The Libyan Investment Authority (LIA) has brought suit against Goldman Sachs in England's High Court of Chancery over a series of nine derivatives transactions. The LIA alleges it lost over $1 billion on the trades, with Goldman pocketing up-front profits of $350 million.

While that figure is just the LIA's best estimate of Goldman's profits, what is known is that the trades were so highly lucrative that the profits on a single one of them prompted Goldman chief executive officer Lloyd Blankfein to inquire internally about the transaction. The Financial Times reported that one Goldman banker informed a partner: "when he [Mr. Blankfein] found out how big the p & l [profit and loss] on the recent trade he started asking questions about it. Pls keep this email to yourself."

Finally, in an internal email, former Goldman salesman Laurent Lalou described a Goldman pitch meeting with the LIA as presenting "to someone who lives in the middle of the desert with his camels."