Ford Motor Company (NYSE:F) CEO Mark Fields said on Tuesday that the Blue Oval will pay a supplemental dividend to shareholders in the first quarter of 2017.

Ford's regular dividend has stood at $0.15 per share per quarter for some time now. That won't change in the first quarter, but Ford will add a one-time payment of $0.05 per share. 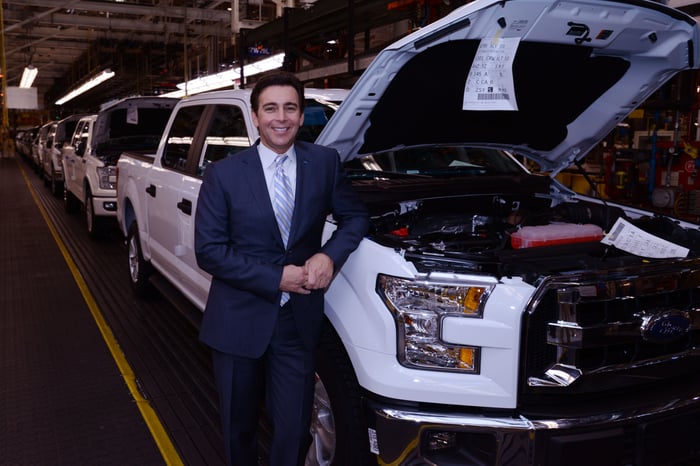 Why is Ford paying a supplemental dividend?

Ford won't officially release its fourth-quarter and full-year 2016 earnings until Jan. 26. But Fields reiterated management's previous expectation that the carmaker will generate about $10.2 billion in total adjusted pre-tax profit for the full year. (Through the first three quarters of 2016, Ford earned $8.24 billion on that same basis.)

That $10.2 billion will be less than the $10.8 billion Ford earned on the same basis in 2015. But it's still a very good year, Ford's second best (after 2015) since 2000 -- and Ford's board of directors apparently feels that it's only fair to distribute some of that profit to shareholders.

Simply put, sales of profitable products like pickups, SUVs, and luxury models were all strong, particularly in North America. Ford also generated a record profit in Europe, and recovered after some stumbles early in the year to finish with a strong result in China.

Fields said that Ford will deliver on most of its previous guidance for 2016, with automotive revenue equal to or greater than the $140.6 billion generated in 2015, an operating margin over 6%, and the aforementioned $10.2 billion in adjusted pre-tax profit.

The one spot where Ford is hinting it won't meet its guidance: taxes. Fields said that Ford's adjusted effective tax rate will be in the "low 30 percent range," a bit higher than the "high 20s" in Ford's earlier guidance.

Why isn't Ford just raising the regular dividend instead?

It's important to Ford to be able to maintain its dividend through a recession (unless that recession becomes extremely steep or prolonged, of course). It doesn't want to have to cut its dividend unless economic conditions are clearly severe. That means keeping the dividend at a sustainable level -- and choosing to distribute extra profit to shareholders via a special supplemental dividend instead.

When will this supplemental dividend be paid?

It'll be paid with Ford's regular first-quarter 2017 dividend on March 1, to shareholders of record as of Jan. 20. In other words, if you want to collect this supplemental dividend, you'll need to get your Ford shares in the next week or so.