A Wall Street Journal article, citing "people familiar with the matter," says Calpine (NYSE: CPN)  is exploring a sale. The company is working with financial services company Lazard to effect this, according to those sources.

Although the process is in the early stages, some private equity companies have indicated their interest in making a play for the energy producer. 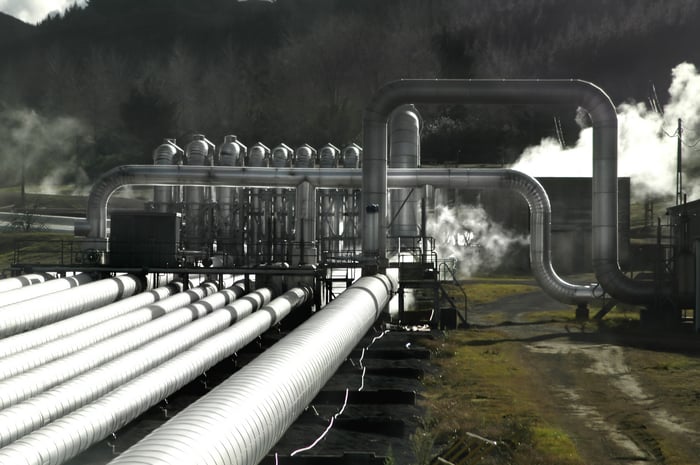 Calpine has not yet commented on the report.

The company, which currently has a market capitalization of nearly $4.6 billion, operates 80 plants across the U.S. Thirteen of those facilities use geothermal energy as a source. This makes it the largest geothermal generator in the country. The remaining plants utilize natural gas.

If Calpine is indeed on the block, it certainly matters to shareholders -- even if the company is struggling at the moment.

That's par for the course, however. The generation segment of the utilities market has had a tough time contending with persistently low selling prices. Certain peer companies active in the sector -- NRG Energy and Dynegy are handy examples -- have landed in the red more often than not in recent fiscal years.

Though Calpine isn't that much of a standout performer among the group, it's managed lately to stay profitable on the bottom line (albeit not by much). And there is certainly interest in the segment, with deep-pocketed investors willing to gamble on an eventual rebound in selling prices; witness Blackstone and ArcLight Capital Partners' nearly $2.2 billion purchase of four American Electric Power plants earlier this year.

So given Calpine's profitability and the initial indications of interest, the company stands a decent chance of commanding a premium in a sale. The stock rose in the wake of the Journal's article, but I think Calpine's an attractive asset and might even be the focus of a bidding war among deep-pocketed rivals. Considering that, it's probably not a bad idea for investors to hang on to their shares for more upside.