Daimler's (OTC:DDAI.F) Mercedes-Benz Cars unit is showing off its vision of an ultra-luxury convertible this weekend. It's long, gorgeous, imposing, fast -- and all-electric.

This is important not just for wealthy car fans but for those who have invested in the hope of seeing electric vehicles become more popular at all price levels. Here's why. 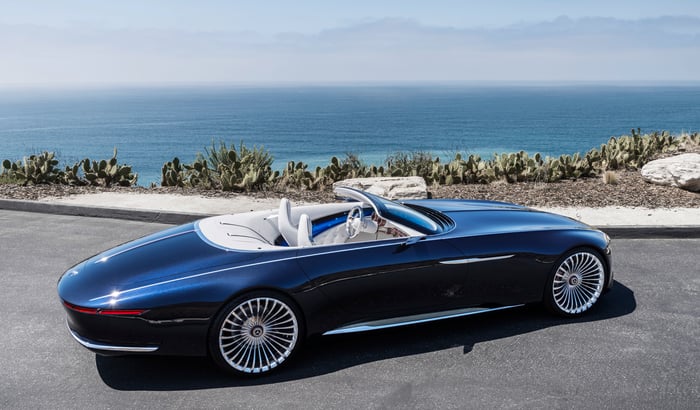 It's fast, opulent, and all-electric: The Vision Mercedes-Maybach 6 Cabriolet is a new show car from Mercedes-Benz. Image source: Daimler AG.

What it is: A dramatic super-luxury convertible

The Vision Mercedes-Maybach 6 Cabriolet, as it's called, is a sleek, super-luxurious two-seat convertible that builds on a stylistically similar coupe that Mercedes showed at Pebble Beach last year.

Like that coupe, the Cabriolet measures almost 6 meters long (hence the "6" in its name), with an extended hood and a long, rounded rear intended to be reminiscent of a luxury yacht's stern. ("Mercedes-Maybach" is a Mercedes-Benz sub-brand focused on high-end luxury vehicles. This car is still a Mercedes-Benz: It wears the brand's three-pointed badge.) 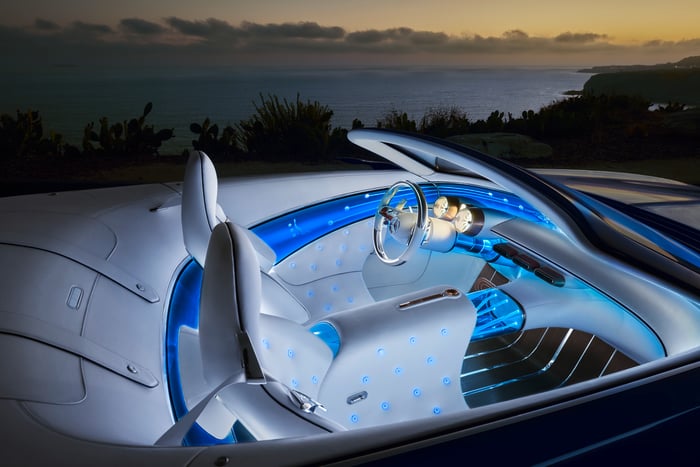 The car's interior is just for show, but includes technologies that could make it to production in Mercedes-Benz's electric vehicles of the not-too-distant future. Image source: Daimler AG.

It's loaded with high-tech features including biometric sensors and even a "concierge" powered by artificial intelligence. The vehicle itself is powered by four compact electric motors (one for each wheel) driven by a flat battery pack under the car's floor. Mercedes claims that the motors have a combined output of 750 horsepower, and that the battery is sufficient to give the big car a range of "over 500 kilometers" on the European testing cycle, or "over 200 miles" by the tougher U.S. standard.

It's also quick-charge capable, rated for up to 350 kilowatts via the CCS DC Fast charging standard. Mercedes claims that 100 kilometers of range can be added with just five minutes of charging at 350 kW. (That's a hint to what we might find in Mercedes' upcoming electric luxury vehicles.)

For now, though, the big Mercedes is just a concept car, just for show. It's on display at the Pebble Beach Concours d'Elegance, a high-end classic-car show held annually in Pebble Beach, California.

Executives at automakers around the world are putting a lot of thought into this question: How can we make electric vehicles that are compelling enough that our customers will be not just willing but eager to adopt the technology?

Tesla (NASDAQ:TSLA) has cracked the code to some extent, at least within the luxury sports sedan segments -- but maybe more importantly, it has started others in the industry thinking about how best to apply battery-electric technology to their own products.

That thinking won't necessarily lead to products that look like Teslas. For instance, I've talked to Ford (NYSE:F) executives who have pointed out that an electric drivetrain could be used to give a pickup truck the ability to pull super-heavy trailers or especially sure-footed off-road capabilities -- features that Ford's current truck customers (that's the important part) might particularly desire. 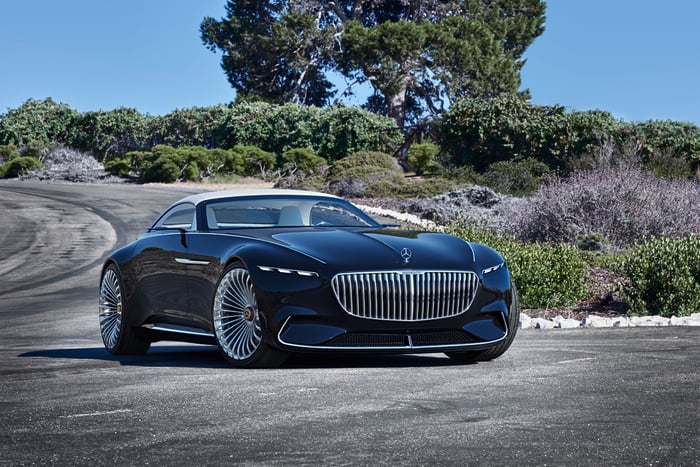 Is it a gotta-have? Mercedes will be carefully gauging reactions to its show car at Pebble Beach this weekend. Image source: Daimler AG.

The Vision 6 Cabriolet shows that the technology could result in a silent, super-opulent, and fast luxury vehicle that doesn't raise environmental concerns -- and that a certain audience might find very desirable despite the fact that it's electric (rather than because it's electric).

That's the significance. For those invested in companies like Tesla, and those advocating the wider adoption of electric vehicles generally, concepts like this help move more skeptical car buyers in that direction. That in turn will push the automakers to build more (and better) electric vehicles.

Or put another way: Like Teslas, but for a somewhat different audience that might not necessarily be interested in a Tesla, this concept points out that electric vehicles can be very, very desirable.

Why Mercedes is showing it at Pebble Beach

Although it's primarily a classic-car show, it has become common in recent years for automakers to display concept cars at the Pebble Beach show. The show draws well-heeled car nerds from all over the world, making it a good opportunity (particularly for luxury brands) to quickly gather feedback on styling or product ideas from a knowledgeable and well-qualified audience.

Will it ever get built?

For now at least, Mercedes is being clear: This is just a show car to explore ideas, not a production-intent vehicle.

But could something like it be considered for production a few years from now? I suspect the answer is "yes" -- if the crowd at Pebble Beach gives it a strong thumbs-up.