Please ensure Javascript is enabled for purposes of website accessibility
Log In Help Join The Motley Fool
Free Article Join Over 1 Million Premium Members And Get More In-Depth Stock Guidance and Research
By Rick Munarriz - Oct 8, 2017 at 10:07AM

The Chinese maker of electric-vehicle products is rolling, trading higher for 10 consecutive trading days without any major bullish developments triggering an 88% two-week rally.

A Chinese maker of electric cars is stepping on the gas -- figuratively speaking, of course. Kandi Technologies (KNDI -0.83%) was one of last week's biggest winners, soaring 60% as investors flocked to the volatile stock. Shares of Kandi have moved higher for 10 consecutive trading days, for a total rise of 88%.

There was no major news out of the company outside of a press release issued near the end of the prior week, detailing a strategic agreement with China's Hangzhou Vocational & Technical College to institutionalize renewable-energy research and develop an outreach strategy to promote renewable-energy vehicles. There have also been no major analyst moves during the stock's heady two-week run. Research Driven Investing did initiate a research report on Kandi on Thursday, but it tapped the stock with a "neutral" rating, and the coverage came eight days into the monster rally. 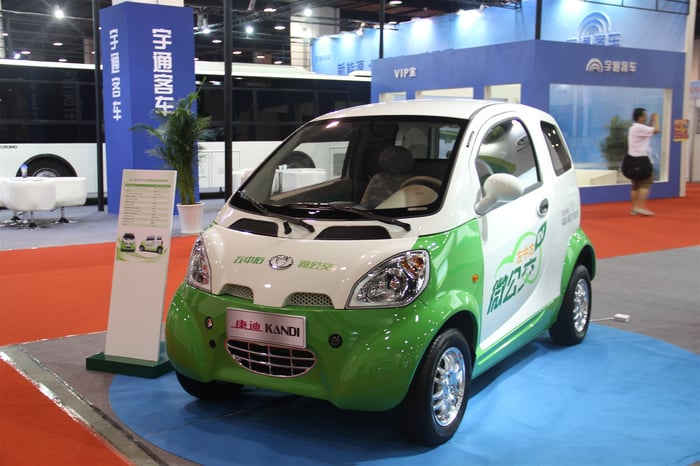 Short squeezes can sometimes spur rallies on volatile stocks with only minimal bullish developments, but that doesn't appear to be the case here. There were just 4.99 million shares of Kandi sold short as of mid-September, the stock's lowest short interest in more than a year.

Kandi got its start selling ATVs and go-karts, but it was the push into value-priced electric sedans a couple of years ago that attracted the market's attention. A car-building joint venture with Geely Automotive resulted in a deal with municipalities to create garages stocked with battery-powered cars that could be rented by the hour.

Shares of Kandi peaked at $22.49 in the summer of 2014, more than tripling that year -- but it's been largely downhill ever since until this recent rally. Kandi failed to gain a serious foothold in China's consumer retail market with its vehicles, and the car-sharing deals made demand lumpy on a quarter-to-quarter basis. Confusion last year surrounding Kandi's reusable battery exchange model and delays in the Chinese government's payment of subsidies to spur electric vehicle sales also didn't help.

Kandi is starting to turn things around. It announced in early September that it sold 3,212 units of electric vehicles in August, a sharp improvement from the 365 electric-vehicle products it sold during the entire second quarter. It announced at the time that it was starting to gradually ramp up production to normal levels, hoping to regain a market leadership position by the end of the year.

It's understandable if investors aren't sold by the buoyant stock. Kandi has burned bulls before. Previous rallies have been snuffed out by the lack of sustainable sales growth and at one point an SEC investigation. But momentum is back, and August's strong sales are encouraging. Kandi will have to keep proving the naysayers wrong as its stock price inches its way back to double digits for the first time in nearly two years.

It's never been an easy road for Kandi stockholders, but the past two weeks have been more than gratifying.