If you've been really sound asleep, you might not know there's been a helluva bull market over the past two years, starting off a brief low in mid-January 2016. Additionally, there's been some "turbulence" over the last month that doesn't change the larger story much, though it does draw new eyes to the question of what is happening to stocks now.

I wrote back in January 2016 in response to both a high-profile call by a market analyst that it was time to "sell (almost) everything" and the market's taking him up on his advice as a sell-off produced temporary lows and some fear. I won't say that my advice in response was to "buy everything," though that wouldn't have been the worst advice possible, but more that stocks didn't seem especially overvalued, and that the economy wasn't in any discernible trouble.

The market rose almost exactly 50% in the two years since to its recent all-time high. But this is a dangerous profession in which to take victory laps -- and February's volatility calls into question the last two years' run. So let's try to answer the obvious question. Doesn't a 50% market return over two years almost guarantee that stocks are too expensive today? 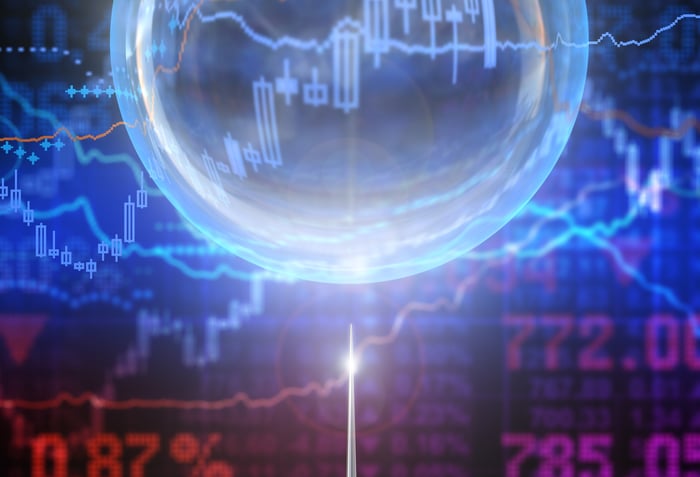 As a starting point, we need to show first that, according to the most used -- though not necessarily best -- metric in valuing stocks, the trailing price-to-earnings (P/E) ratio, stocks (as represented by the S&P 500) have not moved at all over the past two years.

Whether this is as it should be or not, the market has moved in lockstep with reported earnings for two years in a manner that is more or less unprecedented in market history. The period of early 2005 through the fall of 2007 also showed a great degree of stability, though not quite as much if you're looking for a close enough comp and a possible warning flag.

If you are merely looking at the trailing-12-month P/E ratio, whether taking operating earnings or GAAP earnings, you'll see that valuations haven't budged over the past nine quarters. The most recent quarter incorporates Wall Street's consensus estimates for the 2017 fourth quarter, which we are just now getting reports on, and while the consensus estimates are invariably a little bit high on the GAAP side, early indications are that the quarter being reported won't be disappointing -- although there will be some large one-time write-offs as a product of the tax bill, affecting GAAP earnings.

The mere constancy of any particular P/E level over a chosen period of time, however, doesn't begin to give one confidence that today's valuation levels are right. They are, however, the multiples that Wharton professor Jeremy Siegel predicted in November 2001, a time of great societal and market upheaval. Siegel provided mathematical defense for a market P/E of 20 to 25 in the modern era. Did his estimation have predictive value?

Over the past 25 years, the average operating earnings multiple on a quarter-end basis has been 19.22, and the GAAP earnings multiple has been 25.28. The GAAP average has to be taken with a few grains of salt, as during the Great Recession, P/Es averaged nearly 100 for a full year because of extreme one-time accounting writedowns. (Operating earnings were hit, but not nearly to the same degree.) Taking that one year out of the equation, the GAAP multiple has averaged 22.3 over the past 25 years. So a multiple expectation of 20 to 25 has, at the very least, the support of the past quarter-century of data.

We can see competing forces that affect the year-forward earnings expectations. On one hand, year-forward expectations are always too high. On the other hand, analysts have begun to embed, though not yet fully, much of the new tax cuts into their earnings expectations for the year. Calling it for the moment a fair fight between those forces, here is where things stand, working off an S&P 500 level of 2,648, which is where it stood after the large market drop on February 5, 2018.

Looking at it this way, stocks don't look especially expensive, but there are two major assumptions we're making to justify that conclusion.

Keeping those caveats in mind, the market looks expensive judged from the entire sweep of recorded market history, but nearly normal over the past quarter-century, and far from being in bubble territory. Another two-year run like the past two years would put the market in a bubble, but, going by Siegel's formula, 4%-5% annual real returns from here are possible, though more likely on the lower end of that range and more likely over longer periods of time than shorter.