Please ensure Javascript is enabled for purposes of website accessibility
Log In Help Join The Motley Fool
Free Article Join Over 1 Million Premium Members And Get More In-Depth Stock Guidance and Research
By Brian Stoffel - May 1, 2018 at 12:27PM

While still not profitable, these key metrics are moving in the right direction.

Investors who put their money behind software-as-a-service (SaaS) companies need to be patient: It takes time and effort to build out the infrastructure needed to serve an entire industry. It also often takes a herculean effort to convince merchants to sign on to your service.

Those who have put their money behind Instructure (INST) have been rewarded for their patience. The company focuses on providing cloud solutions for K-12 schools, colleges, and universities, and -- increasingly -- places of business. While the company has yet to turn an annual profit, shares have grown 70% in the last year, and this week's earnings report contained more good news. 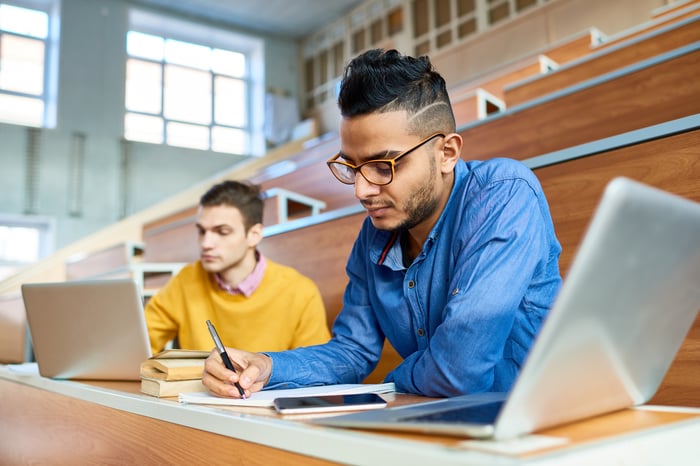 Before we dive into the details of the company's quarter, here's how it performed on the headline numbers.

No one likes to see negative free cash flow. But the company is moving in the right direction, and was free-cash-flow-positive during the third quarter of 2017 for the first time ever. That, combined with a secondary offering that helped cushion its balance sheet with $137 million in cash and no debt, helps make the situation tenable.

The real key here is that the company has continued to grow sales while showing promising leverage. While revenue was up by 39%, for instance, sales and marketing expenses (not including stock-based compensation) were up just 24%. That means the company is growing based on word-of-mouth and by adding more functionality to existing customers. As a whole, operating expenses were up 26% -- far less than overall sales growth.

Because this is primarily a subscription-based business -- where customers pay fees up-front but revenue is only recognized over time -- it's also worth noting that deferred revenue at the end of the quarter stood at $79 million, up 40% from the same time last year.

When schools and companies make a switch toward Instructure's Canvas (for education) or Bridge (for corporations) platforms, they are often making long-term decisions and creating reliable revenue streams. As customers add more and more solutions, that makes the switching costs even higher. For an entire university, for instance, to switch away from Instructure, it would have to make onerous payments for data migration, as well as retrain an entire workforce and risk losing mission-critical data.

Of course, these are the same types of challenges Instructure faces when trying to convert schools currently using the competition's solutions. Increasingly, however, Instructure appears to have a very favorable value proposition. During the quarter, Canvas added to its client roster:

In addition, Instructure's Bridge platform added a number of companies of note, including:

Just as notable, a few of Instrucutre's newer offerings seem to be gaining traction. Last summer, the company launched Gauge -- a product to help track student progress over time. The aforementioned Chesterfield school district also signed on as a Gauge customer for its entire student body.

Furthermore, Guardian Life, a mutual life insurance company, and FranklinCovey, a consulting firm, both signed on to use Practice. The division is the result of a small acquisition Instructure made in late 2017 that included a platform that helps company management teams teach far-flung employees mission-critical practices.

For the second quarter of 2018, management sees revenue coming in at a midpoint of $49.4 million -- representing year-over-year growth of 30%, and non-GAAP loss per share of $0.26 -- an improvement from last year's loss of $0.32 per share during the same quarter.

Clearly management is expecting the leverage that it is enjoying to continue.