Investors in Ford Motor Company (NYSE:F), General Motors, (NYSE:GM) and other major automakers exhaled a sigh of relief as June sales posted a healthy 5.2% gain over the prior year. The good news was welcome as concerns rise about possible tariff implications and as analysts continue to predict a down year for U.S. auto sales. June was the second-largest sales increase of the year and takes year-to-date industry sales 1.9% higher, through June, compared to 2017. Let's take a closer look at some key takeaways from last month's data.

GM is firing on all cylinders

One clear takeaway is that GM has momentum across its lineup. During the second quarter, GM gained half a point of market share and posted double-digit sales gains or better on 14 vehicle lines. Chevrolet and GMC sales outpaced the industry with 6% and 7% sales gains, respectively, and the SUV-heavy brands helped boost GM's average transaction prices $300 higher than the prior year to a second-quarter record of $35,500. 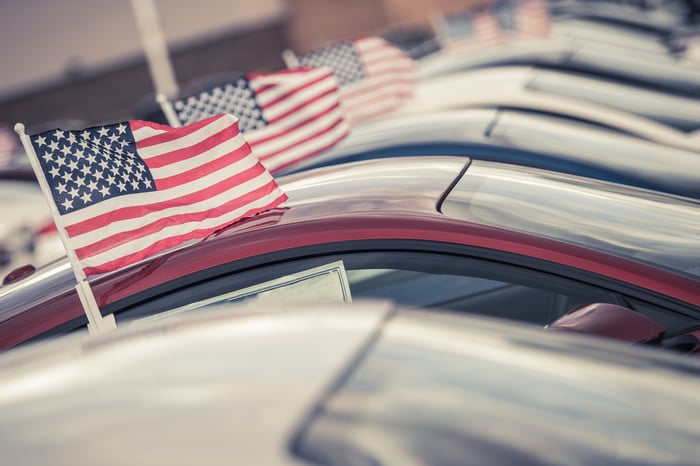 Not to be left out of the fun, GM's Cadillac brand is showing signs of life. Cadillac posted record year-to-date crossover deliveries, with the XT5 posting year-over-year sales gains in 14 of the past 15 months. Cadillac launches the XT4, an all-new crossover, during the fall, which will provide a sales boost in the near term. The luxury brand also intends to introduce a new model roughly every six months through the end of 2021 to power the brand long-term.

While GM is well-known for its full-size trucks and SUV nameplates, its Bolt electric vehicle is also showing strong results. In fact, GM estimates that the Bolt's second-quarter global sales will be up 35% compared to the prior year, and its first-half global sales will be up more than 40%. Management noted that, with demand outpacing its supply, it would boost fourth-quarter production by more than 20%.

Trucks and SUVs continue to power GM's sales, but June and second-quarter sales results make it clear the company is doing well across its entire lineup.

Consumer demand switching in favor of SUVs helped Ford offset its 14% year-over-year slide in June car sales. Its SUV and truck segments were up 8.9% and 3.2%, respectively, pushing Ford's June sales 1.2% higher. Its highly profitable F-Series is on pace to set a new annual sales record, with first-half sales topping 451,000 units -- a 4.1% increase over the first half of 2004, the current record year. Ford brand SUV sales of 77,453 last month set a new June sales record. Fiat Chrysler Automobiles (NYSE:FCAU) also posted a strong 8% sales gain in June. Jeep and Ram both posted record June sales months with gains of 19% and 6.3%, respectively, while sales of Chrysler and Fiat were down 32% and 36%, respectively.

It's not just Detroit autos thriving on SUV sales, with Honda's CR-V and Pilot posting record months. In fact, Honda's light-truck sales jumped 12% last month, which was enough to offset its 2.4% car sales decline. Nissan's Armada, Rogue, and Murano helped drive the Japanese automaker to a 2.5% sales gain last month. The story is similar at Toyota, where its well-known Camry and Corolla posted sales declines during June, but its C-HR, RAV4, Highlander, and Tacoma all posted double-digit gains.

Light trucks generated 67% of U.S. light-vehicle sales during the first three weeks of June, the highest level ever recorded in June and the 24th consecutive month above 60%, according to J.D. Power. June made it clear that it's a bad time to be a major automaker in the U.S. without a successful SUV portfolio. Consumers are clearly ditching passenger cars for larger vehicles, and that trend isn't slowing down.

One critical piece of data for auto investors to watch is incentive spending. The last development any investor wants to see is major automakers getting into an incentive spending war to protect market share at the cost of valuable margins. Fortunately, this has been less of an issue in recent years as average transaction prices have largely increased alongside incentive spending, giving automakers some wiggle room and supporting margins.

One month doesn't make a trend, but investors will want to keep an eye on incentive spending as this cycle peaks and hope that automakers have learned from past mistakes and will avoid profit-eroding incentive wars. Despite rising incentives, June was another strong month for the industry and caps off what should be a strong second quarter from automakers. Tune in for their earnings results later this month.