Blue Apron (NYSE:APRN), Plated, and Germany-based HelloFresh helped establish the U.S. meal kit market in 2012. In the years since, dozens of competitors have cropped up to deliver preportioned ingredients and recipes for ready-to-cook meals to people's doorsteps.

Not all of the companies have survived. Several have been snatched up by large grocers like Kroger (NYSE:KR) and privately owned Albertsons. Meanwhile, other large retailers such as Walmart (NYSE:WMT) and Amazon.com (NASDAQ:AMZN) entered the the meal-kit market on their own in 2017.

For investors looking to buy a pure play in meal kits, the only options right now are Blue Apron or shares of HelloFresh on the Frankfurt Stock Exchange (ticker HFG). Established grocers might present a safer way to invest in the meal-kit market. Kroger has been moving aggressively in meal kits, establishing its own brand and recently buying Home Chef, the third-largest meal-kit company in the U.S. after HelloFresh and Blue Apron.

Let's take a deep dive into the meal-kit market, examining the big competitors, the challenges facing the industry, and whether this recent trend presents a good market for investors. 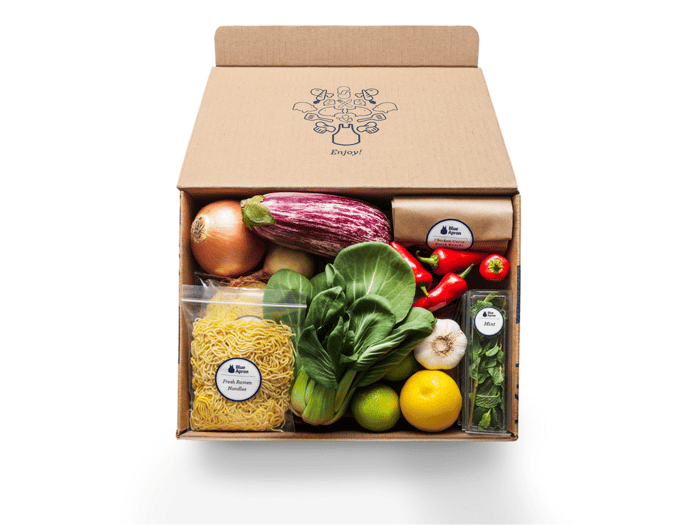 All about meal kits

Meal-kit delivery services typically require customers to sign up for a subscription for regular meal-kit deliveries, usually every week. They send preportioned ingredients and recipes to customers' doorsteps, making it extremely easy to prepare a home-cooked meal.

They take out the time-consuming elements of shopping for groceries and measuring and preparing ingredients. They also reduce wasted ingredients, such as when you buy a whole bunch of green onions and only use three of them, or when you buy an expensive jar of spice and only use a teaspoon. That can save money and it's better for the environment because less food goes to waste. Meal kits reduce food waste by 62%, according to a 2016 study from sustainability nonprofit BSR that was commissioned by Blue Apron.

The business model originated in Sweden in 2007 and it quickly gained popularity throughout Europe. HelloFresh brought the business to the United States in 2012 at the same time Blue Apron launched its meal-kit delivery service.

There are now more than 150 meal-kit companies in the U.S. alone. Even with that wealth of options, less than 10% of American consumers have tried a meal-kit delivery service, according to a survey from Nielsen.

Blue Apron highlights the size of the U.S. grocery market ($780 billion) and restaurant market ($540 billion) as its addressable market. Management cites the growth of e-commerce in other industries as a reason to believe more people will order meal kits like Blue Apron's online. Of course, many companies are keen to say their total addressable market is much bigger than their actual market opportunity.

The big competitors in meal kits

There are quite a few competitors in the meal-kit industry. Here's a rundown of some of the most important players.

There are dozens of other competitors in the market, many serving a specific niche. Additionally, several big brands and celebrities have attached their names to meal kits to try to differentiate their products. Martha Stewart has her own line of meal kits, and Chrissy Teigen has teamed up with Blue Apron.

Major challenges in the meal-kit industry

Meal kits have broad appeal, but acquiring new customers has proven extremely expensive. Blue Apron claimed it had a customer acquisition cost of just $94 in its S-1 filing with the SEC when it had its initial public offering in 2017. That number belies the fact that it's seen lower and lower marketing efficiencies as it expands its marketing budget and tries to reach a broader audience. When Blue Apron pulled back on marketing spend last year, it saw a dramatic drop -- the company lost 290,000 customers in the last three quarters of 2017.

While those are two prime examples, customer acquisition is a significant challenge for other independent brands as well. Acquiring customers requires heavy investments in advertisements in various media, referral programs, and promotional introductory offers. With so many competitors in the space, there's pressure to make those referral programs and introductory offers as enticing as possible. Blue Apron CEO Brad Dickerson has even admitted that customer acquisition is only becoming more expensive as competition increases.

Daniel McCarthy, an assistant professor of marketing at Emory University, estimated in 2017 that 55% of Blue Apron's customers unsubscribe within a month and 72% are gone within six months. Furthermore, he found that customers become less engaged over time regardless of whether they remain customers.

With high customer acquisition costs and poor customer retention rates, it's difficult to break even on new customers. In fact, McCarthy estimates Blue Apron loses money on 70% of customers. That number only gets worse as the cost of acquiring new customers increases and the amount of revenue from each new cohort decreases.

Customer retention appears to improve with more specialized meal-kit services. Sun Basket, for example, claims to have a retention rate three times better than its major competitors, and it raised $58 million in January 2018 to fund an expansion. With its focus on various specialized diets, it's been able to provide greater convenience for its customers, although it makes it more of a niche service.

Another major challenge for meal-kit companies is fulfilling orders, particularly at scale. Each meal-kit company must invest in its own fulfillment center to prepare, sort, package, and ship orders to all of their customers. That requires significant capital investments in real estate and technology, and ongoing investments in people to help fulfill orders.

Not only can it be expensive, but attempting to scale can cause operational issues as well, something Blue Apron is all too familiar with. As it transitioned to its new Linden, New Jersey, fulfillment center -- which features increased automation to reduce manual labor -- Blue Apron faced challenges getting the right ingredients in the right boxes. The number of orders that arrived at customers' doorsteps late or with missing ingredients increased dramatically, which put additional pressure on its customer retention.

Fulfillment becomes increasingly complicated as meal-kit companies add more options for customers. When every customer gets the same order, it's hard to put the wrong ingredients in the wrong box. But when each customer has a unique order, the odds of it being incorrect increase tremendously. Meal-kit companies have to balance that complexity with the ability to attract new customers with a more diverse product selection.

Fulfillment requires big, fixed operating expenses that benefit from scale. For example, HelloFresh's U.S. operations saw its active customer count more than double last year to 890,000, but fulfillment expenses grew just 59% year over year and shrank from 46% of revenue to 38%. But if customers start moving in the other direction, as they did for Blue Apron, those fixed costs are a big drag on profits.

Fulfillment is an area where established grocers have a significant advantage. Walmart, Albertsons, and Kroger have robust supply chains optimized for delivering food to stores. Utilizing their scale, they can more easily shift resources toward meal-kit fulfillment. Amazon is basically a fulfillment company, so it can certainly leverage its expertise should it decide to launch a nationwide meal-kit offering.

Perhaps the biggest challenge for meal-kit delivery services to overcome is that they're all practically the same. You get a box of food delivered to your doorstep every week or so; who cares what logo is printed on the side of the box or who created the recipes?

The barriers to entry are also extremely low. That's clearly evidenced by the boom in different services since 2012 to more than 150 different companies.

As a result, branding is a big focus for meal kit delivery services. And branding requires lots of marketing spend that has diminishing returns as more and more competitors enter the market. 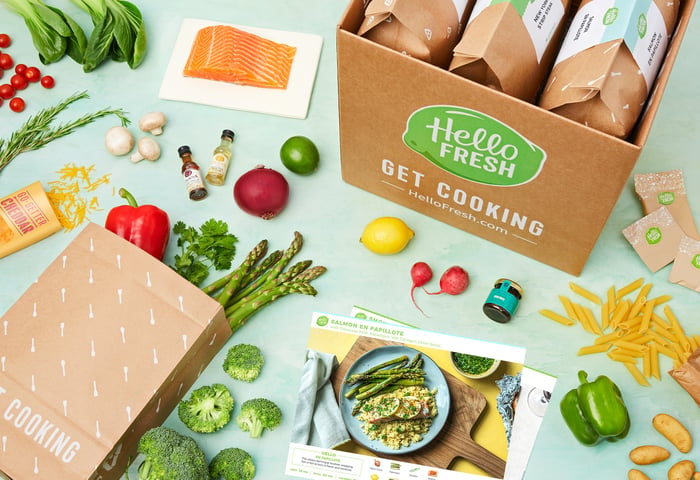 The bull case for meal kits

The subscription economy has boomed over the last half decade. It started with the shift from an ownership model to a rental model with companies offering unlimited streaming video and all-you-can-listen buffets of music. More recently, companies have started offering subscriptions for consumable goods like pet food, toiletries, clothes, and toys. Meal kits capitalize on the growth of the subscription economy, which only appears to be expanding into new markets and getting more and more prevalent.

Meal-kit delivery services also take advantage of the growing preference for fresh food versus packaged and branded food. That trend (along with a growing preference for organic food) is a major reason why Amazon made the move to acquire Whole Foods in 2017, and it's bolstered the sales of meal kits at the expense of frozen meals.

They present an opportunity to cut into restaurant sales as well. Instead of going out to eat for date night, a couple can stay home and cook a meal for around $10 a plate. Not only do they save money, but they also get to share the experience of creating a meal together. To me, this seems like a much better value proposition than the focus on meal kits replacing grocery shopping.

Overall, total spending on meal kits in the U.S. is expected to climb to $11.6 billion by 2022, according to research firm eMarketer. That's a 20% average growth rate from last year. Profits ought to grow significantly faster as companies scale and can leverage fixed costs. If a company can take market share, like HelloFresh did last year, that means it will be growing even faster.

The bear case for meal kits

A recent survey from Albertsons found that 80% of customers want to buy meal kits in stores. (Albertsons might be a bit biased, though, considering it's a grocery store chain.) Even the stand-alone meal-kit delivery services appear to agree, though: Blue Apron announced plans to sell its meal kits in stores in March 2018, and started selling its kits in Costco stores in May.

But there's a limited number of grocery chains that will be willing to partner with stand-alone meal-kit companies, especially as the larger chains including Walmart, Kroger, and Albertsons introduce their own options. A grocer is more likely to create its own meal kit or acquire a meal-kit company than partner with one in order to start selling kits in stores. We've already seen that happen several times.

And while it may be enticing to invest in a company like Blue Apron based on speculation that a grocery chain will acquire it at a premium to its current stock price, that's not a good reason to invest in a company. You'd be counting on something happening that's largely out of the hands of the company's management.

Should you invest in meal kits?

The meal-kit market remains very competitive, making the economics of stand-alone meal-kit delivery companies very unattractive. Shares of Blue Apron have spiked in price recently on speculation that the company could be acquired, giving investors a fairly unattractive valuation for investment at the moment. HelloFresh is only slightly more attractive due to its scale and operations outside of the United States.

But with continued challenges in attracting new customers, retaining existing customers, and fulfilling customer orders in a cost-efficient manner, buying into a pure-play meal-kit company doesn't make much sense.

Buying a grocery chain that's investing in the space, however, might make more sense. Kroger and Walmart have been making aggressive moves and hold a competitive advantage in sourcing and distribution. That said, meal kits represent a very small portion of their business. But if you believe the meal-kit market will become a bigger overall portion of grocery sales, grocers already investing in the space present an excellent opportunity for investors to capitalize on the trend at a fair price.