Even if you plan well for retirement and have a reasonable amount saved, you can still end up in financial trouble during your golden years. There are lots of money traps that even reasonably prepared seniors can fall into if they're not well-versed in the unique details of retirement-stage personal finance -- and the new RICP Retirement Income Literacy Survey from The American College of Financial Services shows that a disturbingly high percentage of them are not.

Of the 1,244 Americans interviewed -- all of them between ages 60 and 75, and possessing at least $100,000 in household assets, not including their primary residence -- three out of four failed a quiz designed to evaluate their ability to make their nest eggs last through retirement. The report also showed that respondents were generally unclear about such important topics as long-term care expenses, investment considerations, strategies for sustaining income throughout retirement, and life expectancy. 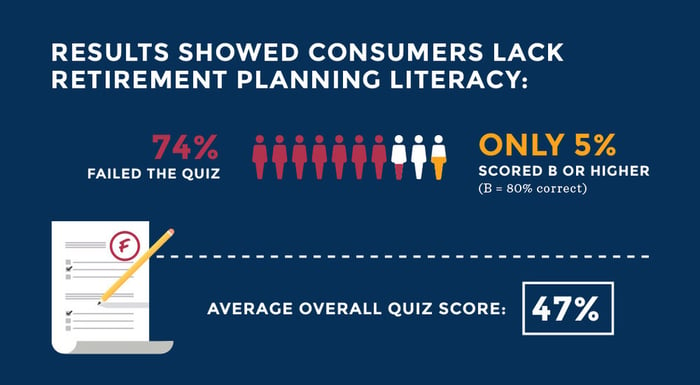 Most are not prepared

The survey respondents were generally confident about their financial literacy -- 61% said they had "high levels of retirement income knowledge." Only 33% of those who felt that way actually passed the quiz, however. Overall, 74% of the total quiz takers scored below 60%, while another 13% received a D for a score between 60% and 69%. Of the rest, 8% earned a C, while 5% scored a B, and fewer than 1% managed to get an A.

"Over the next 12 years, an estimated 10,000 Baby Boomers will reach the age 65 every day," said American College of Financial Services Retirement Income Program Co-Director David Littell in a press release. "More and more Americans are retiring but so few understand basic facts and strategies when it comes to ensuring that their retirement is a comfortable one." 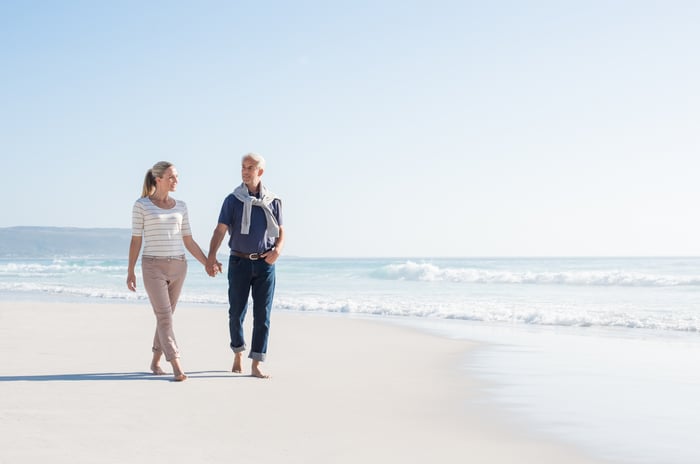 Most Americans do not know what to expect financially in retirement. Image source: Getty Images.

One of the biggest challenges retirees face is making their savings last as long as they do. But survey respondents did particularly poorly on questions relating to retirement security.

For example, only 33% of those surveyed understood that working for two extra years would do more to improve their retirement security than boosting their retirement account contributions by 3% for the last five years of their careers.

In addition, only 38% were aware of the "4% Rule," a commonly used guideline for the percentage of your retirement accounts' assets you can safely withdraw each year.

"Retirees are living much longer so there's a need for smart advice around how to turn consumers' nest eggs into something they can live on for up to three decades or longer in many cases," said American College of Financial Services Retirement Income Program Co-Director Jamie Hopkins in the press release.

It's important to learn as much as you can in advance about what to expect financially when you retire. For most people, it's also a sensible move to meet with a financial planner -- ideally, well before you approach retirement age.

"The results of this survey are alarming and a stark reminder of the need to be prepared for the decades in retirement when you are not earning a steady stream of income," added Littell.

Whether you think you're prepared or you know you aren't, the first thing you need to be clear on is exactly where you stand. Start by mapping out an honest retirement budget that you can compare to the income you can reasonably expect from your savings, Social Security, and other sources. Knowing about how much you're going to need to draw down on your savings each year will give you a fair idea of how long they're likely to last, and tell you now whether you need to make big changes to your savings strategies before retirement.