Investing in the megatrend of an emerging middle class in the developing world is usually a good idea, and there aren't many better ways to do it than through the heating, ventilation, and air conditioning (HVAC) sector. According to the International Energy Agency (IEA), future demand for air conditioning will be such that, all other things being equal, "energy demand from air conditioners will more than triple by 2050, equal to China's electricity demand today." 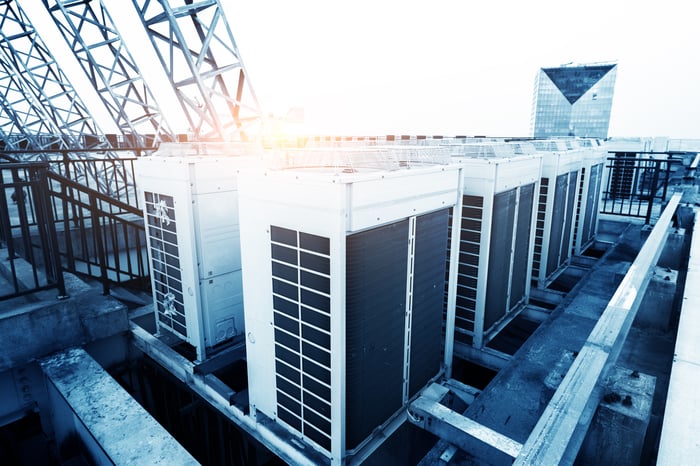 The case for investing in HVAC

The IEA publication "The Future of Cooling" makes a number of points that are bullish for HVAC companies:

To put all this into context, the IEA report forecasts that global residential AC capacity will grow from 6,200 gigawatts (GW) in 2016 to 23,000 GW in 2050, representing a compound annual growth rate of 4%.

How to get exposure to the investment theme

What's interesting about the four stocks mentioned above is that they each offer investors something different. You can see that by looking at the disparity in their valuations. In this case, I'm using enterprise value (market cap plus net debt) over EBITDA, a useful way to compare companies with different debt loads. 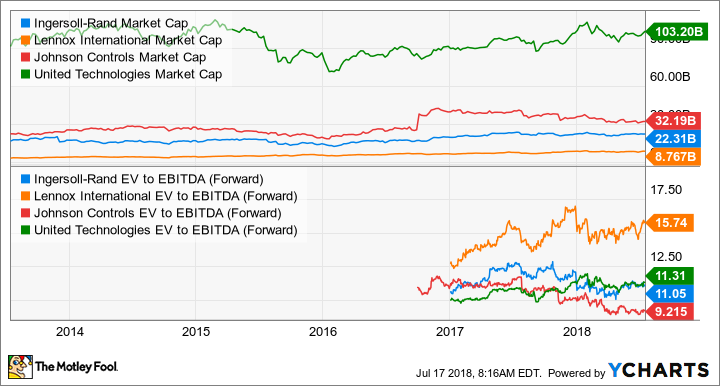 Lennox International's premium rating partly reflects the fact that it's the most heavily focused HVAC play in the sector. In addition, its heavy U.S. (93% of sales go to North America) and residential (59% of sales) exposure mean that it's been focused in very strong markets in the last few years.

Lennox's valuation may look heady, but given its market cap, its U.S. exposure, and the fact that 73% of its end-market sales go to the replacement market, the company is a good candidate for a takeover. For example, a foreign company could immediately acquire a single-digit market share in the U.S. In addition, at some point in the future, Johnson Controls' York or United Technologies' Carrier might be interested in acquiring Lennox.

Both companies' HVAC operations are part of a larger organization. And as you can see above, their parent companies trade at a lower multiple than Lennox and at a lower or similar multiple as Ingersoll Rand -- both of whom have a much higher portion on their profits from HVAC.

But here's the thing. There's reason to believe that both companies are going to spin off (United Technologies) or focus on HVAC operations (Johnson Controls) in the near future. A separation would enable both companies   to make the kind of investments necessary to grow in emerging markets.

In March, Johnson Controls announced that it is evaluating strategic alternatives for its power solutions (car batteries), with CEO George Oliver stating the company had a "strategic priority to strengthen and invest in our global market-leading positions in HVAC, fire and security solutions, and integrated building management systems." Watch this space.

Similarly, United Technologies CEO Greg Hayes is reviewing the possibility of splitting the company into three parts, including a stand-alone company for climate, controls, and security (UTC CCS).  It's a move that hedge fund managers are actively arguing for, and it would free up CCS (which contains Carrier) to invest and try to win back market share from Ingersoll-Rand's Trane brand.

The pick of the sector 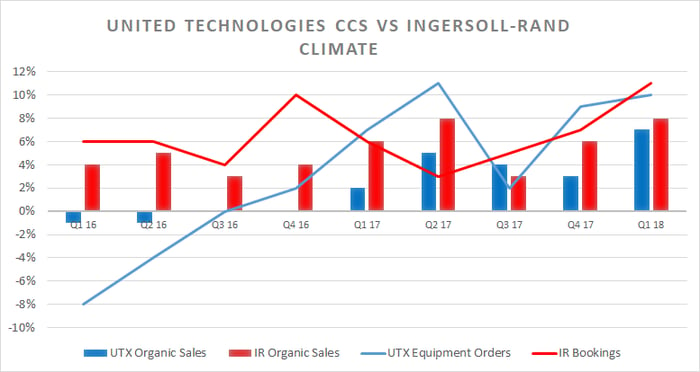 Moreover, Ingersoll-Rand is already making inroads in the high-growth China market, having put a direct-sales strategy in place there. Discussing emerging markets on the first-quarter earnings call, CEO Mike Lamach referenced "very strong" growth in China, and that India is expected to be up "mid single digit" for the year for the company. Meanwhile, Ingersoll-Rand continues on its long march toward raising margins.

Any HVAC spinoff from Johnson Controls and United Technologies would be worth looking at closely. While Lennox International is a good option for investors solely looking for U.S. exposure.

However, if the IEA is right, then emerging markets are likely to drive growth in the future, and Ingersoll-Rand is already positioning itself for that growth. All told, the company represents the best way to play an exciting investing megatrend.