That was Sean Glaspie's take on the globally televised Apollo 11 moon landing in Season 7, Episode 7 of AMC's Mad Men. While a momentous and historic event, it was arguably the high cost of Apollo (nearly $175 billion in today-dollars) that eventually doomed the program and forced America to come back down to Earth, not to return to the moon for another half-century (and counting).

Nearly 50 years later, NASA -- America's National Aeronautics and Space Administration -- has budgeted $35 billion to have Boeing (NYSE:BA) and Lockheed Martin (NYSE:LMT) build it a new "Space Launch System" nearly as powerful as the Saturn V rockets that took us to the moon.

Is $35 billion a lot of money? Perhaps not in "Apollo" terms, but it's still a tidy sum. What's more, predictions are starting to emerge that the already over-budget SLS could cost as much as $1 billion, or even $2.5 billion, per launch. Viewed in the context of Congress's NASA budget for fiscal year 2019, that certainly is a lot of money. Congress envisions spending no more than $1 billion on projects related to the moon this year -- but one single SLS launch would blow the budget before the rocket even leaves its launch pad! 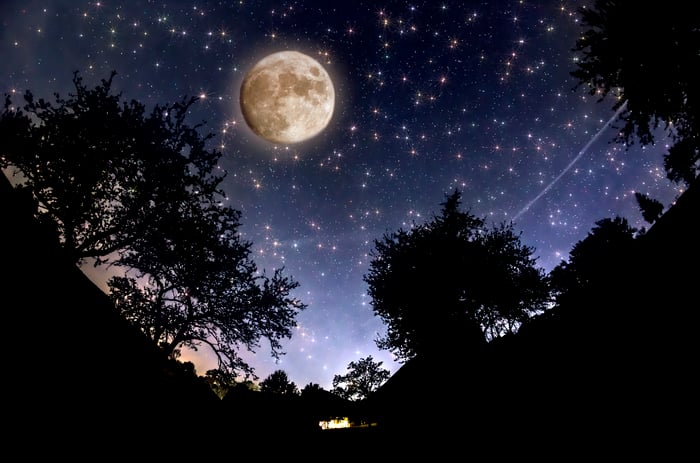 NASA has the moon on its mind. Image source: Getty Images.

The high cost of taking a moonshot

So how do we cut costs? Last month, at a NASA Advisory Council (NAC) meeting at the Ames Research Center in Moffett Field, Calif., NASA Administrator Jim Bridenstine dropped some heavy hints about NASA's plan to "sustainably" return America to the moon. As potential clues to find winners (and losers) in the space race, I think these are worth considering.

Here's a quick review of three highlights from Bridenstine's talk.

"Reusable" is the key to "sustainable"

Bridenstine devoted the first 15 minutes of an introductory 22-minute presentation to President Trump's Space Policy Directive-1, which states that "the United States will lead the return of humans to the Moon for long-term exploration and utilization" in "an innovative and sustainable program of exploration with commercial and international partners." And I think the two key words here are "commercial" -- because NASA will be relying heavily on commercial companies, some of which we can invest in -- and "sustainable."

"Long-term exploration and utilization" of the moon requires a reduction in cost to ensure NASA can sustain it over time. Fortunately, says Bridenstine, NASA today can avail itself of "capabilities that didn't exist even five or ten years ago," such as "reusable rockets" that cost much less to operate over time than do the expendable rockets currently in use around the globe.

Currently, however, neither Boeing nor Lockheed Martin builds rockets capable of launching and landing for reuse. Only SpaceX and Blue Origin do that. (And for the time being, only SpaceX has a first-stage rocket that can put a satellite in orbit and then land back on Earth and be reused.)

The inescapable conclusion: SpaceX (and perhaps eventually Blue Origin) are going to figure prominently in NASA's efforts to return to the moon -- and despite their role in building SLS, Boeing and Lockheed will feature much less prominently.

"Reusable" may not always mean what you think it means

Boeing and Lockheed may not be cut entirely out of the loop, however. This is because, for at least a couple of years now, the Boeing and Lockheed joint venture United Launch Alliance has been working on a plan to reuse not its first stage launchers, but its second stage rockets -- in orbit.

This ties in to Bridenstine's comment that "we want reusable tugs that go from Earth orbit to lunar orbit" and back again. ULA's "ACES" program, in which the spent fuel tubes that are second stage rockets could be left in orbit, fitted with supplemental equipment, and transformed into orbital tugs, would seem to slot nicely into this aspect of NASA's plans for lunar development. Similar plans by Orbital ATK (now part of Northrop Grumman) and Maxar Technologies to build their own fleets of space tugs may also play a role in NASA's future plans.

In addition to revisiting the moon, though, and exploring the moon, Bridenstine says we're also "going to utilize the resources of the moon." This will include mining the moon for water ice that can be used for drinking water and broken down into oxygen to breathe and liquid hydrogen and liquid oxygen for rocket fuel. It will probably also include mining moon-rock for raw materials to build lunar habitats to live in. It could include resource extraction for use on Earth.

"There could be trillions of dollars worth of platinum group metals" on the moon, opines Bridenstine. (Though we won't know till we go back there and do some prospecting.) There certainly are "rare earth metals that are extremely valuable" on the moon, and those, too, could be an object of lunar resource utilization.

This suggests future investing opportunities could arise if and when currently private companies like Moon Express and Planetary Resources (both of which have expressed interest in space mining) have IPOs.

And one more thing

One final observation that Bridenstine made, which I think is especially important to keep in mind: "We want interoperability" among the various sorts of rockets used for travel to and from the moon, among space stations on the lunar surface and in orbit above it, among lunar landers, and lunar shuttles as well.

For NASA to get the full benefit of multiple commercial space companies all competing for its business, it's essential that the agency not fall victim to "vendor lock," where one company's products don't play nicely with others'. That's why NASA will want to ensure that everything it buys from one vendor will be able to communicate, dock, and otherwise interoperate with hardware and software from other vendors.

Making the moon affordable will be a team effort, and there's plenty of room for all sorts of companies -- and investors in them -- to profit from it.