The loss of a legendary chairman could threaten Nissan's tripartite alliance.

Every day, Wall Street analysts upgrade some stocks, downgrade others, and initiate coverage on a few more. But do these analysts know what they're talking about? Today, we're taking one high-profile Wall Street pick and putting it under the microscope.

Shares of No. 2 Japanese automaker Nissan (NSANY 2.53%) were under pressure this morning. That may be partly the result of a new downgrade announced on Nissan stock by analysts at Australian bank Macquarie. But more than that, one imagines that the bigger reason behind both Nissan's share price weakness and Macquarie's downgrade is the unfolding saga surrounding Carlos Ghosn. 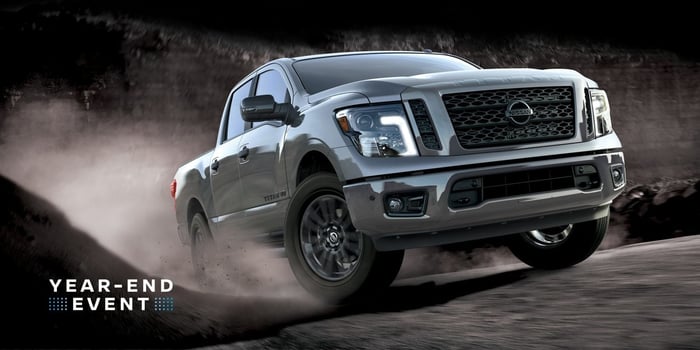 Nissan still has this Titan, although it just lost a titan of industry -- bad news for shareholders. Image source: Nissan.

Who is Carlos Ghosn?

Ghosn was Nissan's CEO from 2001 through last year, when he was succeeded by new CEO Hiroto Saikawa and became Nissan's chairman. He engineered the alliance among Nissan, France's Renault, and later Japan's Mitsubishi. In so doing, Ghosn transformed Nissan from a second-rate Japanese player into a member of a global empire to be reckoned with.

Now, however, that empire is at risk of crumbling.

Earlier this week, news broke that Ghosn had been arrested by Japanese prosecutors on suspicion of underreporting his personal income (i.e., tax evasion). On Thursday, Nissan announced that its board voted to oust Ghosn as chairman. According to news reports, Nissan is alleging that in addition to tax evasion, Ghosn misappropriated company funds to buy luxury houses around the world, and to make unauthorized consulting payments to his sister.

Although Ghosn still hasn't been officially charged with any crimes, that may not be enough to save Nissan stock. Renault, where Ghosn is still chairman and CEO, is reportedly upset with Nissan for dismissing Ghosn.

What it means to Nissan

Renault's protestations notwithstanding, there does appear to be something to this investigation. In addition to Ghosn himself, Nissan has also apparently removed Ghosn's lieutenant, Greg Kelly, from his post as representative director on allegations he masterminded whatever it was that Ghosn was up to. Kelly is in Japanese police custody as well, and it's entirely possible more executives might be tied to this scandal as details emerge.

Even if that doesn't happen, just the loss of Nissan's longtime chairman -- the driving force behind the company's pioneering role in the shift from gas-powered cars to electrics -- combined with Renault's reported displeasure could be enough to break the Nissan-Renault alliance. And if that were to happen, it would destroy at least some of the benefits Nissan gains from this alliance (for example, the ability to share technologies between the companies and buy parts in bulk).

Nissan stock is already down more than 5% since news of this scandal broke. At just 5.1 times earnings, it may appear enticingly cheap to investors looking for a chance to buy on the dip. But Macquarie is not taking the bait. Instead, it downgraded Nissan stock to neutral, and stepped to the sidelines to wait and see how this all plays out -- and that might be the right call.

Consider: Nissan's operating profit margin is in its third straight year of decline, according to data from S&P Global Market Intelligence, and currently sits at 4.3%. That's already inferior to the profit margins of larger automakers such as General Motors (5.7%) and Volkswagen (6.5%). (But not Ford, which earns just 3.5%.) The potential loss of efficiencies of scale from a breakup with Renault (and/or Mitsubishi) would almost certainly hurt Nissan's profit margin even more.

Granted, there's no certainty that Ghosn's troubles will lead to the breakup of the alliance, But if Renault and/or Mitsubishi ultimately follow suit and dismiss Ghosn from their leadership, an important linchpin holding the alliance together would be lost.

But even if that disaster scenario is avoided, it looks like Nissan could be in for months of investigations, recriminations, and management turmoil in its upper ranks -- distractions that the business can ill-afford. At this time of transition within the automotive industry, Nissan needs to be focused on navigating the move to electric vehicles, to ridesharing, and perhaps eventually to self-driving cars.

Instead, Nissan has this management mess it needs to clean up. That's not going to be good news for shareholders at all.